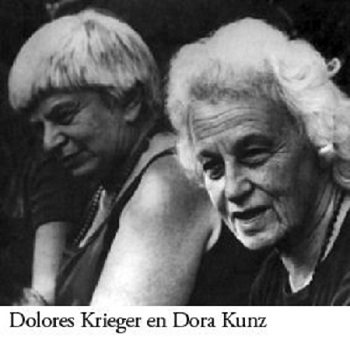 A method of healing employing a knowledge of human energy fields. The system was developed by Dr. Dolores Krieger and Dora Van Gelder Kunz. Krieger was for many years head of the New York University’s School of Nursing, and Dora Van Gelder Kunz grew up with clairvoyant power which allowed her to see, with the aid of this faculty, areas of energy imbalance in the human body.

The concept of Therapeutic Touch is that of holistic healing, taking into account the entire individual rather than the fragmentation into physical, emotional and mental parts and treating each aspect separately. It involves the postulate that there are healing forces in Nature which seem to be vibratory and are accessible to all who are willing to accept their existence and are willing to become a vehicle or channel for their use.

In the early 1970s, using the above ideas, Krieger and Kunz began testing their theories and verified that anyone interested in being used as a channel, and willing to get beyond personality, can learn to serve in this capacity. Krieger initiated the training among her graduate nursing students and gradually this training spread around the U.S., then to other parts of the world. To date, there are thousands of nurses who have the technique as part of their background training. Dora Kunz, all through the years until her death in 1999, was constantly involved in giving workshops, courses and seminars to doctors, nurses and other health professionals on the subject.

The technique is not complex. The person doing the healing must first get beyond personal feelings of accomplishment and become open to being used as a channel through which Nature’s healing forces can flow. With the subject seated on a straight backed chair, relaxed, with feet on the floor and back erect, the healer(s) (one in front and one at back is most effective), first get in touch with the energies through a moment of meditation while holding their hands, palms out, above the subject’s head. There is no physical contact between participants, but by slowly passing the hands down the head, shoulders, torso and legs (at a distance of a few inches), it is possible to feel areas of heat, cold, tension, etc. which indicate a lack of balance. After this assessment, concentration is on either drawing out vibrations of inflammation (indicated by heat) or sending senses of energy (where cold indicated lack of vitality). At the end of the session, whose length is determined by needs which were found, the healer(s) smooth out the general area of treatment with brushing strokes so as to assist in achieving a sense of overall balance. There are many finer points in this process, such as the use of color visualization, which can be studied by the use of any of an assortment of educational books on the subject.

Results achieved vary greatly, based somewhat on the attitude of both the subject and the healer. The more open the subject is to the ideas, the greater the received benefits are apt to be which are received. The healer is cautioned not to feel that the results are personal achievements, but that any benefits are from natural forces for which the healer is merely a channel. An attitude of personal detachment is needed which sometimes makes it difficult to react positively if treating one’s loved ones. Probably the greatest success has been achieved in relieving pain and tension in seriously ill patients, which in turn allows the body to function more efficiently and fight destructive forces.

While the method has not yet received universal endorsement from traditional sources, it is spreading to more and more treatment centers around the world and is helping to alleviate much pain and suffering.