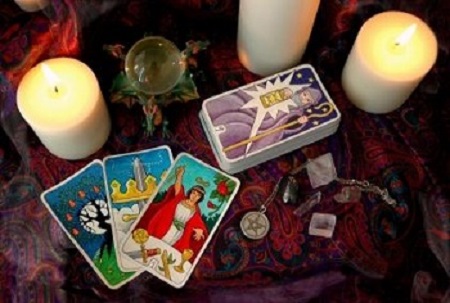 Playing cards that are used either as a card game or for divination and character reading.

As a Game. Tarot is played in many countries including Germany where it is called tarok, and central Europe, France, and Italy where it is called tarocchi. The game as it is played today uses 54 cards, comprising 32 suit cards, 21 tarots that are permanent trumps and a joker. Each suit includes 4 court cards. Tarot cards, which were originally illustrated with esoteric designs, are now, in a playing pack, printed with Roman numerals I to XXI. The game of Tarot includes competitive bidding similar to bridge, a scat or widow, melding of honor combinations, the effort to capture counting cards in tricks, etc.

As an Aid to Divination. Here the full symbolic pack includes 78 allegorical representations of man, woman, and the cosmos which are divided into two groups known as the Major and Minor Arcana. The Major Arcana comprises 22 cards. The whole of these cards are said to refer to the Principles, the Causes and connect the sidereal world, the Number, the Letter, the evolution of Man. Each is represented by a triple aspect – symbolical, numerical and alphabetical, and astrological.

One reference suggests that the Major Arcana contains the secret of Theosophy. This is the Tarot of initiation, the secret of the combination of Force and Matter; the union into one of Philosophy, Science, Religion and Wisdom (The Encyclopedia of Occult Sciences, New York, 1939).

“The real Tarot, in its complete symbology, can be found only in the Babylonian cylinders, that anyone can inspect and study in the British Museum and elsewhere. Anyone can see these Chaldean antediluvian rhombs, or revolving cylinders, covered with sacred signs; the secrets of these divining ‘wheels,’ or, as de Mirville calls them, ‘the rotating globes of Hecate,’ have to be left untold for some time to come” (Helena P. Blavatsky, CW XIV:106).