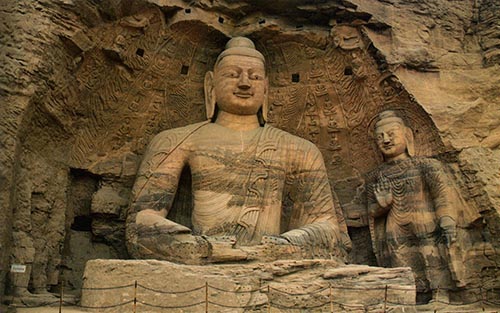 As more and more texts became available, confusion arose among Chinese Buddhists, since all the scriptures were ascribed to the Buddha even though they often took different, even contradictory, points of view. One way of explaining the apparent inconsistencies was worked out by the monks on T’ien-t’ai mountain south of Hang-chou. They explained the Buddha’s inconsistencies by postulating different stages in his career and his discovery that most people could not understand his more subtle doctrines. The T’ien-t’ai (Tiantai in Pinyin) sect flourished for a time in China, but did not survive in its motherland. However, it was introduced into Japan by the Japanese monk Saicho (762-822) as Tendai Buddhism and continues to be an influential sect there.

Another major sect to develop in China was Pure Land (Ch’ing-tu; Qing-du in pinyin), eventually becoming the single largest sect in China. It emphasized that mere repetition of the name of Amitabha Buddha would guarantee one a place in a Western Paradise where effort toward attaining nirvana would be easier than in this sensual world. During the Sui (581-618) and T’ang (618-960) dynasties, a multitude of sects developed in China. Among the more important, besides those already mentioned, were: Hua Yen, a sect based on the voluminous Avatamsaka (Garland) Sutra which emphasized the oneness of all; Fa Hsing, a sect based on the Yogacara (or “Mind-Only”) school of Indian Buddhist philosophy, and San-chieh-chia (Three Stages Sect), which tried to harmonize the Buddha’s teaching by dividing it, as its name suggests, into three stages; and, of course, Ch’an (which became Zen in Japan).

Imperial persecution of Buddhism, particularly in 845 CE, generally wiped out many of these sects, though some found new life in a Japanese setting. Besides Pure Land, the other major sect to survive the persecution was Ch’an. The name ch’an, from the Sanskrit dhyana (contemplative meditation), is said to have been brought to China by the rather eccentric Indian monk Bodhidharma in the late 5th century. Tradition has it that Bodhidharma brought with him the Lankavatara Sutra, a work which reveals the influence of Yogacara. Ch’an soon took on very Chinese characteristics by adopting ideas and literary techniques popular among Taoist intellectuals. For example, Ch’an utilized a technique known as the kung-an (“public case”; qong-an in pinyin; Japanese koan), often paradoxical statements intended to shock the hearer out of his normal empirical consciousness and into a state of sambudhi (Japanese satori), i.e., enlightenment. Even its account of its own history as found in The Transmission of the Lamp is so full of paradoxes and apparent non sequiturs that it is difficult to know whether any of it can be taken as factual history. But many of the kung-ans used by Ch’an are derived from these accounts. They were eventually preserved in collections like The Blue Cliff Record and the Mumonkan. In Japan, the koan remains one of the hallmarks of the Rinzai (Chinese Lin-chi) sect of Zen.

Ch’an Buddhism, under the influence of Taoism, placed great emphasis on nature and natural beauty as well as on spontaneity in the arts. These tendencies were even more developed in Japan, leading to the austere beauty of the Zen garden, the haunting sound of the shabuhachi (bamboo flute), and 17-syllable haiku poetry. In Japan, meditational discipline (zazen) also became more carefully organized and, if anything, more rigorous. It is, perhaps, only chance that Ch’an or Zen became one of the earliest forms of Buddhism to be popularized in America — largely through the efforts of the well-known writer Daisetz T. Suzuki. Although not the most important sect in either China or Japan, it has surely been one of the most influential in America, although Tibetan Buddhism is now rivaling it in popularity.

While most forms of Buddhism have remained the traditions of small groups of immigrants, Zen has been able to speak the language of many American and European intellectuals and has been influential with such diverse persons as Thomas Merton, John Cage, and Frederick Francke. The enthusiasm for Zen in America has done much to restimulate Japanese interest in Zen and eventually may do the same in China, although it is difficult to guess the future of the latter. After years of repression, Buddhism is again allowed to operate in China and has attracted more novices than anyone would have expected. Still, it would appear that it will be years before Buddhism can again become anything like a dominant force in that country. Perhaps the reintroduction of “new” Buddhism from the West will have the effect.

We have 628 guests and no members online