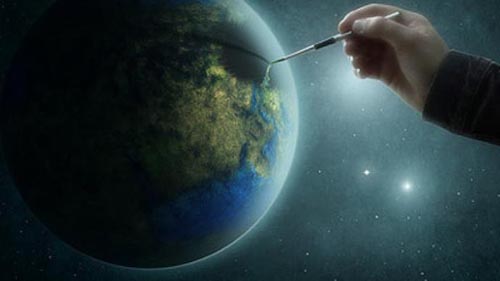 This creation view is primarily found in the Judeo-Christian-Islamic religious tradition, and differs with those of the Hindu-Buddhist view, which is rooted in the doctrine of EMANATION. Buddhism in fact does not have the concept of a “creator” or God. The Jewish Torah (Pentateuch of the Old Testament) starts with the account of the creation of the world by Elohim in six days. Man was created on the sixth day, after which the Deity rested on the seventh day. When Charles Darwin proposed the theory of evolution as the explanation of the origin of the species, Christianity rose up in vigorous opposition to this view since it, in effect, questioned the traditional belief that human beings and other creatures were created directly by God. Theosophy disagrees with creationism — whether it is the creation of the world by a God, or the creation of the human soul at birth. It adopts the view that the cosmos is but an emanation of the CAUSELESS CAUSE, such emanation of which is subject to the universal law of cycles, of manifestation and dissolution (MANVANTARA and PRALAYA). Helena P. Blavatsky wrote in The Secret Doctrine:

No more than Science, does esoteric philosophy admit design or “special creation.” It rejects every claim to the “miraculous,” and accepts nothing outside the uniform and immutable laws of Nature. But it teaches a cyclic law, a double stream of force (or spirit) and of matter, which, starting from the neutral centre of Being, develops in its cyclic progress and incessant transformations. (SD II:731)

She states that except for the Talmudist and Christian exoteric teachings, all religious philosophies accept the ex nihilo nihil fit (out of nothing, there is nothing) hypothesis, since generation ex nihilo is contrary to both reason and science.

We have 231 guests and no members online