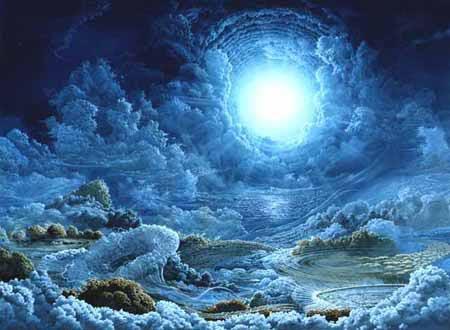 In Helena P. BLAVATSKY’s view of the Cosmos, the whole of the manifested universe is the result of the interaction of COSMIC IDEATION with COSMIC SUBSTANCE — and Fohat originates from that interaction. Fohat represents or corresponds in nature to the force which generates tension and yet is still the resultant tension itself (SD I:16).

Alice Bailey states that “Agni is Fohat, the threefold Energy (emanating from the logoic Ego) which produces the solar system, the physical vehicle of the Logos, and animates the atoms of substance. He is the basis of the evolutionary process, or the cause of the psychic unfoldment of the Logos, and He is that vitality which ultimately brings about a divine synthesis in which the form approximates subjective demand, and after being consciously directed and manipulated, is finally discarded” (A Treatise on Cosmic Fire, p. 610).

Any general discussion of Fohat will be embroiled in paradox. When it is viewed broadly and analyzed, Fohat will be seen as a complex and sometimes bewildering series of powers and qualities that appear to have little or no unity in spite of having a common source.

Fohat is power in a dynamic form and is the creative purpose flowing through the manifested universe, but it can, in contrast to “creativity,” manifest as a fierce destructive force. Thus it can be regarded as a duality, Fohat being both the active “male” potency and Sakti (female), the reproductive power in nature. In This Dynamic Universe (T.P.H., 1951, p. 7) this duality has been likened to the function of a seal and wax, Sakti is the capacity to take up an impression, inherent in wax and in other plastic and pliant materials, while Fohat is the potency that makes the impression, the seal, stamp or die itself, imprinting a replica of its own characteristics upon the receptive wax. Both Fohat and ®akti represent differentiations of the larger universal Fohat as the One Force.

It is possible to picture Fohat on a wide scale as a dynamic pulsating energy, not unlike electricity, but not identified with it. Unlike electricity, Fohat has rather been seen as some vast and cosmic consciousness operating at every “level” of the cosmos and linking each plane to the other; spirit to mind and mind to matter. In such a sense Fohat might be described as the “law-giver” of the universe.

It is necessary to outline, as clearly as possible, a picture of how Fohat manifests and works, keeping in mind the fact that it is not that which manifests, but the invisible energy behind that manifested form. In the mineral kingdom Fohat emerges as such phenomena as electricity although the actual work done by electricity is by virtue of the movement of electrons. It also appears on the material level as prana where it organizes matter as living material. In the sentient animal form Fohat is very complex, for superimposed on the two “forms” mentioned above is the creative reproductive power of kundalini. (See PRANA; KUNDALINI.)

We might consider the situation when matter existed in its most basic form, called in theosophy Mulaprakrti. Some purposeful force is needed to stir this basic matter to build more complex forms and combinations — that force is Fohat; that force continues to be present as more and more complex forms emerge, although Fohat, of necessity, changes its character to suit the needs of each level of being.

Blavatsky sums up the complex story of Fohat very well when she states that, “It is through Fohat that the Ideas of the Universal Mind are impressed upon matter” (SD I:85).