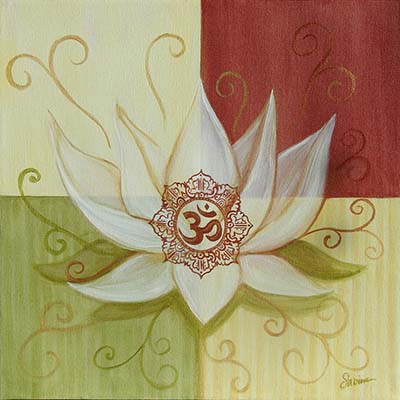 A sacred syllable in the Hindu religion where it is called the pranava. It is considered to be a powerful mantra said to invoke divine energy, peace, and harmony. The word is usually uttered at the commencement of all Hindu hymns and prayers. It is also repeated at the end of prayers in the form “Om, santi, santi, santi” where santi means “peace.”

Since Sanskrit writing is syllabic, rather than alphabetic, the syllable “om” is identified as aksara, i.e., indivisible, or ekaksara, “one syllable.” The letter o in Sanskrit is actually a combination of a + u, hence the syllable is sometimes written (and pronounced) “aum” even though this would be incorrect Sanskrit. The proper pronunciation would be like “home” but without the “h” sound. Saying it is called omkara or “making an om.”

The letters a + u + m are sometimes said to indicate the divine powers of BRAHMA, VISNU, and SIVA, which make up the Hindu Trinity. Thus, om, according to this interpretation, represents the whole of creation, including the Creator. According to the Mandukya Upanishad, the letters represent the three states of empirical consciousness: waking (a), dreaming (u), and deep or dreamless sleep (m). The silence which follows these is said to represent the illumined state of consciousness. That Upanishad recommends meditating deeply on om while keeping these states in mind.

From a purely linguistic point of view, om may be said to encapsulate all the elements of speech, since the a sound is made with an open throat and represents the sonic aspect of language, the u sound made with a rounded mouth represents shaping that basic sound into various different letters, and the m sound represents terminating the shaped sound(s) into separate words. Since Hinduism identifies creation with om, usually called Sabda-brahman (“Divine or Supreme Word”), this interpretation has obvious similarities with the Christian notion of Creation by the Word and the Word made flesh.

That, however, is merely an exoteric interpretation of the word. Helena P. BLAVATSKY calls om “the most sacred of all Eastern formulas” (“ES Instructions I,” CW XII:517) and points out that it has a profound significance, corresponding to the upper triad in man, i.e., atma, buddhi, and manas (cf. IU, II, 114; “ES Instructions,” CW XII:639). She suggests that it “can be pronounced as two, three or seven syllables, setting up different vibrations” (ibid., p. 642), that every syllable has “a secret potency producing a definite result, but the whole invocation has seven different meanings and can produce seven distinct results, each of which may differ from the others” (“ES Instructions I,” CW XII:517). If Om or Aum is “pronounced by a very holy and pure man,” she says, it “will draw out or awaken” in him “not only the less exalted potencies residing in the planetary spaces and elements, but even his Higher Self, or the ‘Father’ within him. Pronounced by an averagely good man, in the correct way, it will strengthen him morally, especially if between two ‘Aums’ he meditates intently on the Aum within him, concentrating all his attention upon the ineffable glory. But woe to the man who pronounces it after the commission of some far-reaching sin: he will thereby only attract to his own impure photosphere invisible presences and forces which could not otherwise break through the divine envelope” (“ES Instruction I,” CW XII:534).

Blavatsky states that om or aum “is the original of Amen” which “was borrowed by the Jews and Greeks from the Chaldees”; furthermore, that Amen “does not mean ‘so be it’ or ‘verily,’ but signified in hoary antiquity almost the same as Aum” (idem). She points out that in Hebrew gematria the numerical value of AMeN is 91, “the same as the full value of YHVH, 26 and ADoNaY, 65, or 91. Both words mean the affirmation of the being, or existence, of the sexless ‘Lord’ within us” (idem)

We have 428 guests and no members online