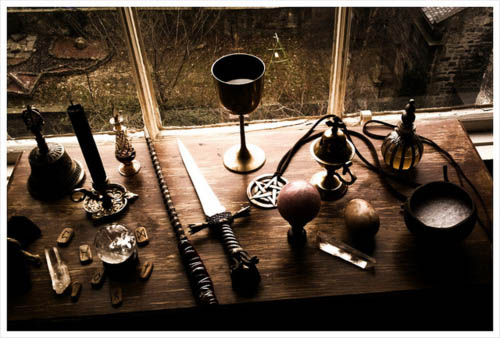 The word witchcraft is derived from the Old English word “wicca,” which in turn was derived from Old High German “wīt, meaning “holy.” Witchcraft was originally associated with spiritual practices but got a bad reputation at the hands of European and American orthodox Christians. Hence its present dictionary definition attributes to it “the exercise of supernatural powers” or “the use of sorcery or magic.” It is assumed that witches are in league with evil spirits or the Devil. However, the practice originally referred to priests (usually called wizards or warlocks) and priestesses (witches) of the old religion in Europe who discharged many functions in the community, such as farmers, doctors, or lawyers.

It has been suggested that the origins of this old religion date back to the Paleolithic Age when the Horned God of the witches first appeared as a god of hunting, a form of sympathetic magic. Much later the Horned God was known by the Celts as Cernunnos which does mean, “The Horned One.” In time, after the coming of Christianity, the Horned God was equated with the devil. The erroneous identification of the Horned God with the Devil of the Christians provided the basis on which was founded the witch trials of the 13th to the 18th centuries as well as the Biblical injunction “thou shalt not suffer a witch to live” (Exodus 22.18 KJV; other translations have sorceress instead of witch). In Ancient Greece witchcraft is mentioned as early as Homer (Circe) and the best known sorceress in classical times was Medea.

By the fifteenth century in Western Europe, witchcraft trials and executions had become very common. Pope Innocent VIII, in his bull Summis desiderantes affectibus (1484) recorded that men as well as women were practicing witchcraft in Germany. He maintained that they obtained their power from sexual contact with incubi and succubi (male and female evil spirits) and that they had brought about such tribulations as sterility, impotence, disease, famine, and murder. He sent the Dominican priests Henricus Institorus and Jakob Sprenger to Germany as inquisitors. Their book Malleus maleficarum stated that the origin of witchcraft was “carnal lust” said to be “insatiable” in certain women and laid down that those accused of witchcraft should be investigated, with torture if necessary. If convicted, but penitent, they were condemned to imprisonment for life; if unrepentant, they were handed over to the law to be executed, usually by being burnt alive at the stake. It has been estimated that millions of individuals, mostly women, were executed for alleged witchcraft during the Middle Ages. The persecutions by the Catholic Inquisition and others practically eliminated the practice of witchcraft or at least drove it underground for several hundred years.

In 1939 Gerald Gardner with some followers initiated a revival of witchcraft. In his Book of Shadows which recorded the ceremonies of witchcraft, he lists the eight most important festivals:

1. Candlemas (February 1). A fire festival dedicated to the dread lord of death and resurrection; purification; life and giver of life.

3. May Eve (May 1). Celebrating the sun’s coming up from the south.

4. Beltane (June 22). Celebrating the coming of the sun god.

5. Lammas (August 1). A feast for a bountiful harvest.

7. Samhain (November 1). Also Halloween. The feast of the Dread Lord of Shadows.

8. Winter Solstice (December 22). Celebration of the return of the Sun God.

In Isis Unveiled (2:117-118, footnote), Helena P. Blavatsky wrote: “We really think that the word ‘witchcraft’ ought, once and for all, to be understood in the sense which properly belongs to it. Witchcraft may be conscious or unconscious. Certain wicked and dangerous results may be obtained through the mesmeric powers of a so-called sorcerer, who misuses his potential fluid; or again they may be achieved through an easy access of malicious tricky ‘spirits’ (so much the worse if human) to the atmosphere surrounding a medium.”

For over a hundred years, prominent theosophists have warned against involvement in some of the practices attributed to witchcraft, which could lead to severe psychological problems, including possession. However most people involved in what they prefer to call Wicca do not condone those practices and therefore are in no danger. Some of the latter have even become respected members of Theosophical groups.