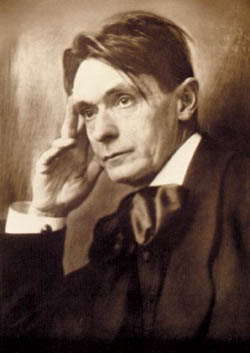 In any case, Rudolf Steiner was a man of profound spiritual creativity who would undoubtedly have needed to go his own way sooner or later. Born in Kraljevic (then in Austria-Hungary, now Croatia), he moved considerably in youth because of his father’s railroad employment. He attended a technical college in Vienna, where he became deeply interested in Johann Wolfgang von Goethe’s scientific writings. These works stimulated an abiding interest in the relation between sensory and spiritual experience. Steiner edited them for publication (5 vols. 1893-97) and later, from 1889 to 1896, worked in Weimar, Germany on a standard edition of the great philosopher-poet’s works. He moved to Berlin in 1897, supporting himself as an editor and lecturer. In 1896 he published the German original of the Philosophy of Freedom (English trans. 1916), a work that laid the foundation of the theory of cognition that was at the basis of his later spiritual work. It was not until 1899, however, that Steiner’s thought took a strong occult turn; this was after an experience which he described in his autobiography as “standing in the spiritual presence of the Mystery of Golgotha in a profound and solemn festival of knowledge.” Also in 1899, Steiner married Anna Eunicke who died in 1911. His second marriage on Christmas Eve of 1914 was to the actress Marie von Sievers.

After 1902 Steiner was a Theosophical, Anthroposophical worker, speaker, and writer. A born teacher with a capacity to make the most recondite concepts significant and exciting, Steiner soon found himself a very popular figure on the platform, as well as in German society. His many books are largely publications of his lectures. Some twenty other works, however, are generally considered fundamental expositions of his thought and essential to its understanding. They include Knowledge of the Higher Worlds and Its Attainment (German original 1904), Theosophy (German original 1909) and Occult Science: An Outline (German original, 1909).

In his occult work, Steiner wished especially to pursue the deeper meaning of the Western intellectual and spiritual tradition. He believed strongly in the importance of Christian and Rosicrucian esotericism and in the spiritual dimensions of Western science. At the same time he wanted to restore to them certain concepts usually associated with the East, including karma, rebirth, and spiritual evolution. His ideas centered around a schema of the levels or planes of human nature and the spiritual aspects of evolution. Steiner taught that the spiritual is primary and that humans had originally shared the spiritual consciousness of the cosmos. Matter is real, but derivative from spirit. Our present human knowledge is only a remnant of what was formerly known. In terms of evolutionary development, the spiritual level came first. Steiner employed linguistic as well as intuitive insights to show that the human physical body evolved from its spiritual nature rather than the other way round. Thus evolution has been essentially a spiritual “devolution.”

In certain of his lectures, he proposed that even the physical characteristics of animals, such as the plumage of birds and the well-developed heart and lungs of lions reflect cosmic spiritual and mental traits, which are also shared by humans. These animate manifestations of the cosmos, therefore, can help us to comprehend the larger horizons now half-forgotten.

However, Steiner affirmed that the coming of Christ made possible a reversal of the devolutionary process. He therefore affirmed the basically mystical Christian nature of his system. For Anthroposophy, Jesus Christ is the one avatar, the one fully initiated person in human history, the one whose supersensory perception was complete, the new Adam who has recovered what was there at the beginning bu then lost. The story of Christ’s life, death and resurrection is interpreted as a mystery drama of initiation. Inner initiation is the key. There are disciplines by which what was lost can be recovered. These embrace not only formal Christian spirituality, important as that may be, but also Anthroposophy’s broad humanism including eurhythmy, music, and art.

Basic to Steiner’s doctrine was the description, in terms partly common to theosophy, of four levels of human nature. These are the physical, the etheric, the astral and the egoic. Each of these requires its own mode of knowing. The physical depends on sensory knowledge, the etheric on imaginative knowing, the astral on inspirational wisdom and the egoic on intuitive or spiritual awareness. Making use of all levels of knowing, Steiner claimed ability to penetrate the spiritual nature of all entities. He sought to develop a “spiritual science” that transcended sensory knowledge. It could be used to recall the primal wisdom and then to apply it for human benefit.

In more than six thousand lectures, Steiner described the inner etheric and other forces at work in both plant and human life. On this basis he advanced new methods in agriculture and medicine. He saw significance in color and music for health and wholeness and developed theories of education involving eurhythmics and a seven-year cycle of development. Those are implemented by the Waldorf or Steiner schools around the world. Steiner also contributed to the theory of art, sculpture, and architecture. Those ideas are embodied in the Goetheanum, the headquarters building of the Anthroposophical Society in Dornach, Switzerland, designed by Steiner as an expression of certain of his theories. The first Goetheanum, started in 1913 and delayed by war, was destroyed by fire in 1922 when it was nearly completed; the second still stands.

Upon its re-establishment after the trauma of the First World War, the Anthroposophical Society attained modest but lasting growth, especially in the German-speaking and English-speaking worlds. Its distinctive public works came into prominence as well. The best known are probably the Waldorf or Steiner schools, already mentioned. Local branches of the Society, characteristically intellectually-oriented groups in which lectures and discussions will be central, often have a core membership of Steiner school teachers. Sometimes, however, there will also be a local congregation of the Christian Community, also known as the Movement for Religious Renewal, a small Anthroposophically-related church which offers formal worship and the traditional Christian sacraments as parallel vehicles for spiritual development in attunement with Anthroposophy’s Christian slant. It was established primarily through the work of a Lutheran pastor, Friedrich Rittelmeyer (1872-1938). Its chief rite is called the Act of the Consecration of Man.

In addition, Anthroposophy sponsors teachers’ colleges, schools and homes for children with special needs, community banking foundations and branches of the Weleda Organization, purveyors of herbal and other “natural” remedies prepared along Steinerian lines. One may also find “Bio-Dynamic” gardens and farms, which pursue another Steinerian idea. They eschew the usual modern chemical support system for agriculture in favor of following lunar cycles and fertilizing in accordance with homoeopathic principles, that is, the use of very small amounts of a substance similar to what one is combating, in order to evoke a natural prophylactic response. The idea, then, is to pursue means that harmonize with the course of nature rather than that requiring massive intervention.

Steiner died at Dornach in 1925. Though relatively small, the Anthroposophical movement has had an influence out of proportion to its numbers through its educational work and the intellectual quality of many of its members. Steiner’s own books, particularly the three key works cited above, are indispensable to understanding his life and work. His auto-biography, written in his last year, was published in English as Rudolf Steiner: An Autobiography(1978). Other sources include Steward C. Eaton’s Man and World in the Light of Anthro-posophy (1975), Rudolf Steiner: Herald of New Epoch (1980),and Robert A. McDermott’s The Essential Steiner (1984).