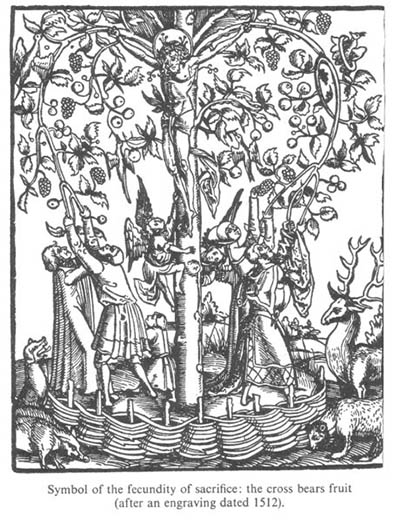 The cross is known today as the symbol of Christianity because Jesus was supposedly crucified. Yet, according to Gerald Massey, an Egyptologist, Christian iconography of the catacombs did not have the symbol of a crucified human being for six centuries. In fact, according to Helena P. Blavatsky, in the first two decades, the apostles regarded the symbol with horror (Isis Unveiled 2:255).

As a symbol, the cross is a binary system where the horizontal limb corresponds to the passive principle or the world of phenomena, and the vertical limb the active principle, that is, the transcendent world of spiritual evolution. Apart from the symbolism of the cross itself, crucifixion has acquired its own esoteric meaning. Theosophical literature tends to view the crucifixion story of Christ as an allegory.

Classical sources exhibit some measure of agreement regarding the symbolism of the crucifixion of Christ. It was and is commonly held that the crucifixion symbolizes the Divine sacrifice where Jesus of Nazareth, being the Son of God, took upon himself all the sins of humanity. That the crucifixion was viewed as something that happens for the sake of all humanity is graphically depicted in the medieval drawing shown below.

Theosophical literature takes the crucifixion symbol as the suffering or limitation of the higher spiritual principle due to its being fixed or “nailed” in the cross of matter. On one level, the macrocosmic, H. P. Blavatsky states that crucifixion legends “were built upon one and the same primitive type; the voluntary sacrifice of the logoi — the rays of the one LOGOS, the direct manifested emanation from the One ever-concealed Infinite and Unknown — whose rays incarnated in mankind. They consented to fall into matter, and are, therefore, called the ‘Fallen Ones’ ” (Collected Writings 8:200). On the ordinary human level, it is the “Higher Ego which is, so to speak, punished, which suffers, and this is the true crucifixion of the Christos” (Collected Writings 12:660).

Gottfried de Purucker wrote that “the meaning of the crucifixion is the resignation, painful to most human beings, of the material personal man and exchanging it for a greater light; and it is called a crucifixion because to the personal man with his limited vision it seems like his own death. We must remember that the inner Christ — or the inner Buddha if you please — is fixed to the cross of material existence; but after the crucifixion there ensues the resurrection of the inner god” (Purucker, Questions We All Ask).

Geoffrey Hodson wrote that “the Cross of Matter in the human is sixfold, and … the middle of the intersection is the ‘crucified Christos’ — the divine nature in man crucified on the cross of the fourfold personal nature: physical, etheric, astral, and lower mental (prideful, critical, cruel, separative mind)” (Hodson, Light of the Sanctuary).

We have 495 guests and no members online