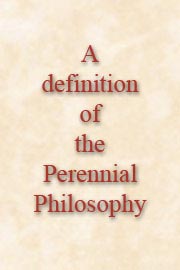 The ageless philosophy about the cosmos and human life that is at the core of all great religious and mystical traditions. The term philosophia perennis was used by Gottfried Leibniz (1646-1716), who adopted it from the writings of Italian Catholic theologian Agostin Steuco (1496-1549). It was popularized by Aldous Huxley in his book Perennial Philosophy, published in 1946. This worldview is closely similar to the ageless wisdom as propounded in Theosophy, although the latter has a larger scope than the former usually includes.

Huxley described perennial philosophy as the metaphysic that recognizes a divine Reality substantial to the world of things and lives and minds; the psychology that finds in the soul something similar to, or even identical with, divine Reality; the ethic that places man’s final end in the knowledge of the immanent and transcendent Ground of all being—the thing is immemorial and universal (The Perennial Philosophy. London, 1946, p. 1). To illustrate this universality, Huxley’s book compiled statements from all the great religious traditions on common themes, such as on the unity of human consciousness and the divine reality, the transcendence of the Godhead, and the mystical approach to such realization. The term Perennial Philosophy has since been widely used by many writers to describe a common mystical view of life and the universe.

In Western thought, the idea that there is a unifying philosophy behind religious and mystical traditions did not, however, originate with Steuco or Leibniz. Cicero (106-43 BCE) had spoken of a universal religion when he, speaking of life after death, stated that “these things are of old date, and have, besides, the sanction of universal religion” (quoted by W. Thackara, “Perennial Philosophy,” Sunrise, April/May, 1984). Ammonius Saccas (circa 175-242), the founder of Neo-Platonism and teacher of Plotinus, similarly espoused a philosophy that attempted to reconcile all religions by pointing to the common root, the universal Wisdom-Religion. H. P. Blavatsky, principal co-founder of the Theosophical Society, wrote: “The ‘Wisdom-religion’ was one in antiquity; and the sameness of primitive religious philosophy is proven to us by the identical doctrines taught to the Initiates during the Mysteries, an institution once universally diffused. ‘All the old worships indicate the existence of a single Theosophy anterior to them. The key that is to open one must open all; otherwise it cannot be the right key’ ” (Key to Theosophy, p. 4). She stressed that it is likewise the work of the Theosophical Society to call the world’s attention to the existence of a Wisdom-Religion at the core of all major religions, past and present. In fact, her works, particularly The Secret Doctrine, are the most documented attempts to demonstrate this commonality by tracing the diverse scriptures, myths, and traditions from both East and West back to a tradition called Gnosis, literally “(esoteric) knowledge.”

Such a wisdom has long been assumed in the East. The terms Brahma-Vidya, “Divine Wisdom,” and Gupta-Vidya, “Secret Knowledge,” suggest a wisdom that is universal and transcendent, beyond the outer practices and dogmas of specific traditions. Both Eastern and Western philosophic traditions, as well as various writers and schools of thought embody the worldview of the perennial philosophy in some form, such as Philo Judaeus, Rumi, Sufism, Ralph Waldo Emerson, Henry David Thoreau, Kabbalah, and Jakob Boehme.

We have 723 guests and no members online