From the Greek mythos meaning tale, talk, fable. All ethnic groups have mythology or folklore enshrined, some in writings, some in oral tradition and some in both. From the Australian Aborigines to the Zulus of Africa tales of heroes and villains are told around campfires that have been handed down for hundreds, in some cases, thousands of years. The universality of myths suggests that they perform an essential function in all nations. Plato states in the Phaedon and the Gorgias that myths are the vehicles of great truths well worth the seeking. Rudolf Steiner, a nineteenth century German mystic and Theosophist, stated that “myth is the collective dream of the people.” 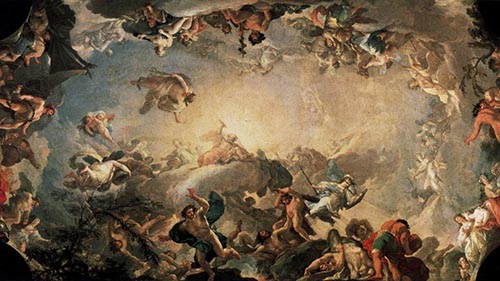 Scholars have interpreted myths in many contrasting ways, as allegories, as the romanticized stories of long dead kings, as the “seeds” of the religions and as the personifications of human traits. Max Müller described myths as a “disease of language”; a somewhat untenable view that contributed little to the debate (quoted in the E.B. ed. 1970, p. 1133). Mircea Eliade suggests that, “The myth defines itself by its own mode of being. It can only be grasped, as a myth, in so far as it reveals something as having been fully manifested, and this manifestation is at the same time creative and exemplary since it is at the foundation of a structure of reality as well as of a kind of human behavior. A myth always narrates something as having really happened as an event that took place, in the plain sense of the term — whether it deals with the creation of the World or of the most insignificant animal or vegetable species” (Myths, Dreams and Mysteries, 1960, p. 14/15).

It seems reasonable to concede that no single view of the nature of myth can be valid of itself. Some myths may be purely for entertainment, some instructional, some designed to work in subtle fashion on the national or individual psyche. Most myths do share a certain factor however. They are couched in symbolic terms and thus achieve a certain amount of what might be termed “universality.” Fairy tales are examples of this universality; for instance, the story of Cinderella can be found in many nations and in hundreds of versions all conveying the same essential message.

G. A. Gaskell in the introduction to his Dictionary of all Scriptures and Myths maintains that no person, living or dead, has invented a myth, but that myths are often the products of trance or automatic writing; in other words, myths emanate from some non-physical and, presumably, non-human source. This view does not stand up to close scrutiny. Two examples will suffice to show how some myths may originate. In Papua New Guinea the arrival of airplanes bearing food and other essentials gave rise to the so-called “cargo cult” with its attendant mythology. The stories that theosophist Frank Baum wrote for the entertainment of his daughters about the Land of Oz have entered into the folklore of a nation.

Helena P. Blavatsky, in her The Secret Doctrine writes, “For a myth, in Greek μύθoϛ, means oral tradition, passed from mouth to mouth, from one generation to the other; and even in the modern etymology the term stands for a fabulous statement conveying some important truth; a tale of some extraordinary personage whose biography has become overgrown, owing to the veneration of successive generations, with rich popular fancy, but which is no wholesale fable. Like our ancestors, the primitive Aryans, we believe firmly in the personality and intelligence of more than one phenomenon-producing Force in nature” (I:425).

Anthropologists have attempted to categorize myths, but little general agreement has emerged. It can however be agreed that certain very basic fears and needs of humanity give rise to a very large number of traditional tales: life and death; the origin of the world; the losing and gaining of necessities; good and evil; the relationship between gods and humanity. Alternatively, myths might be categorized by country or race of origin; thus we find well defined types in Ancient Egypt, India, Persia, Scandinavia and so on.

The purposefulness of myths cannot be better illustrated than by those of the Australian Aboriginal tribes since these people were isolated from other cultures for about 50,000 years. These stories typically describe journeys by ancestors or totemic animals at the “dream time” long ago. During these journeys, in response to dramatic events happening to the traveler, the landscape was altered giving rise to outstanding and significant features such as Uluru (formerly called Ayers Rock) and new species of plants and animals. These myths, passed on to each generation during initiation ceremonies, were essential factors in the life of the people. Through them each generation learned how to survive in what is, in many cases, quite hostile conditions and provide for the conservation of individual animals and plants. The myths also provided spiritual support and a sense of oneness or identity with the environment.

Of course, mythological accounts of the origin of topographical features are by no means confined to those of the Australian Aborigines and similar accounts exist in many other countries. The ancient Chinese for instance recount the story of a great divine man called P’an Ku, when he wept his tears gave rise to the Yangtze and Yellow rivers.

Myths about the creation of the universe have been used in Tibet to discover the origin of certain illnesses and their cure. It is believed that the solemn recitation of a cosmogonic myth is sufficient to cure some diseases.

Many of the world’s great works of art were inspired by myths: the Wagnerian operas such as Tristan and Isolde, Parsifal and those of “The Ring”; The Raft of the Medusa painted by Géricault and The Rape of Europa by Titian; numerous sculptures such as Perseus With the Head of Medusa by Cellini; Appollo and Daphne by Bernini.

The neglect of national myths in western cultures may account for some of the increase of spiritual poverty now occurring. One theosophical point of view would be that the repeated telling of myths could nurture a certain atmosphere (thought forms?) that might serve to counter aggression within and between nations and nurture a more spiritual orientation. The telling of these tales, especially during the formative years, might be conducive to a habit of thought that includes tolerance and compassion instead of the racial and religious hatred that prevails in many places. Many tales emphasize ethical behavior, rewarding merit and punishing evilness or arrogance. The story of Cinderella is typical of this.

The foregoing point of view is well summed up by Blavatsky who wrote, “Much as ancient mythology was vilified, perverted, corrupted by the intolerance of early Christianity; however much every trace might have been thought obliterated, yet, once that it got hold of the popular imagination it will never die out. The nearest generation of converts may have shunned the faith of their forefathers; those following immediately after will gradually and unconsciously return, if not to it — then, at least to many of its most striking symbols and conceptions” (CW 13:298).

We have 979 guests and no members online