[In part, this article was previously published in Theosophy Forward, March 2012]

Readers of Theosophy Forward were recently invited to share thoughts regarding the succession of leadership in the Theosophical Society Adyar. Reactions were marginal or insignificant, almost as if the writers feared even to consider this subject.

The third quarter issue of Theosophy Forward contained an article entitled “Theosophical Leadership.” In the introduction to that article, among other things, I wrote:

“Before long, at the latest in 2015, once more an International President will have to be chosen, and it is quite possible that this time more than one candidate will be on the ballot. But having learned from the 2008 debacle, and looking forward to the future, even if there should be only one candidate, it is a good exercise to ponder the subject of Theosophical leadership. What are the requirements and challenges for a modern leadership that will enable the largest Theosophical organization to find its rightful place in the world, serving humanity? Who could be suitable candidates? And how should members prepare themselves for that inevitable election looming on the horizon?”

When one looks at the phrase above: “Before long, and at the latest in 2015,” it was a kind of forecast. Unfortunately it so happened that on Thursday, October 31, 2013, the seventh International President of the Theosophical Society Adyar, Radha Burnier, died.

When we go back in time, it is clear that 2008 was not a very good year for the Theosophical Society Adyar and its members. It became painfully clear how divided and vulnerable the organization had become. During the election for International President, choices that some thought were the right ones later seemed to be unfortunate, to say the least. The apparent conflict drove many apart and didn’t contribute to a much-needed cohesion among members.

Until today, the aftermath of that ill-fated epoch is felt in Adyar circles, and many are still not accurately informed and left in the dark about what really took place, even though impartial historical documents dealing with the events, archived and accessible by anyone, are available on the Internet. The 2008 election proceedings were an example of how not to elect a leader. Some have definitely made up their minds about those events and will never consider changing their opinions or look rationally at historical facts. They prefer to cling to worn-out and untrue conspiracy theories, the inapt disenfranchise fright, or the “move-the-headquarters-to-the-USA” phantom. So be it.

Looking back at the two candidates on the ballot at the time, however, and to what actually happened in 2008, neither John Algeo nor Radha Burnier personally had anything to do with the utter nonsense that was allegedly coming from their so-called supporters. Their good names, especially their personal relationship and reputations were used by others who, ambitiously and ruthlessly, were occupied waging their own personal conflict, pursuing explicit agendas; so those others made it seem as though Burnier and Algeo were rivals.

Neither one of those two would ever say anything to discredit the other. I dare to state that, in spite of some fundamental differences of opinion, Radha Burnier and John Algeo always respected on one another immensely.

Whatever happened then, all of us need to look forward now, and things need to be done better. The International Rules and Regulations need to be followed. If those rules no longer suit, they need to be altered. That is everybody’s responsibility.

The Theosophical Society Adyar, as one of the major vehicles for the dissemination of theosophia, the perennial wisdom, is emphatically not the property of its International President, its Vice President, Executive Committee, or General Council; it belongs solely to its members. So, let those members raise their voices and contribute, and let those who can make a difference prepare themselves appropriately and be present when and where it counts. The problems the TS Adyar is faced with now cannot be solved on Theosophy Forward or on any other Theosophical social networking site. It needs to be done in Adyar during General Council meetings. With modern software, GOTO for example, and the internet at its disposal the General Council can meet a number of times per year through conference calls next to its annual meeting at Adyar. The International President, who is first and foremost a member of the Society, naturally holds office at the International Headquarters in Adyar; but to reiterate, the Theosophical Society Adyar should unquestionably be a united and international organization.

As an organization, an association as H.P.B. called it, the Theosophical Society Adyar is obliged to set a good example. Individuals can share their thoughts and convey their opinions, but a collective action is necessary to bring about weighty changes. No member should accuse, point fingers at, or affront another member. Theosophy is about living up to the teachings and acting together.

Adyar members ought to reach out, so that East meets West again and vice versa. The Theosophical Society Adyar is not just an Indian affair, yet those in the West should make genuine efforts to get to know Indians better.

To conclude a personal note: I owe much to Adyar. I actually met my dear wife Terezinha on the banks of the Adyar River, and I had the privilege of serving there, experiencing typical Indian hospitality, friendship, and ways of doing things. 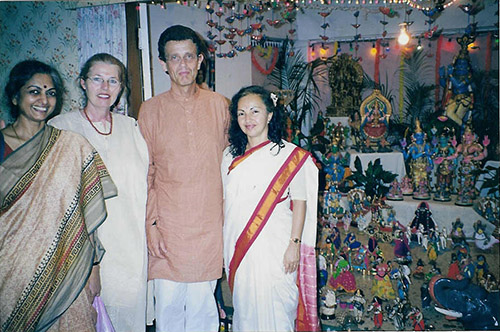 "I owe much to Adyar." The author and his wife Terezinha on the far right with friends.