Many moons ago, it must have been in the summer of 1968 while I still living in Amsterdam, that, for the first time in my life, I was told that such a thing as Theosophy exists. The man who was good enough to open that door for me was an elderly, well-known Jewish musician who miraculously had survived the horrors of World War II. I was fascinated to hear from him about the laws of cause and effects, karma, reincarnation, the visible and invisible worlds, tolerance and compassion, freedom of thought, and how music creates energies, influencing people’s minds and their environment.

I remember it vividly how we took walks in a park in the capital of The Netherlands. When we would sit down on a bench, he always started to tell me about his long and interesting life as a violinist and conductor, the artists and composers he had met, his years in Paris, the loves of his life and … Theosophy.

At the time, the colorful and vibrant sixties, my head was filled with Jim Morrison, Jimi Hendrix, and the Iron Butterfly. I was certain that I was going to change the world. Bob Dylan was my hero, the war in Vietnam was horrible, Woodstock was still in the making, and at night I sat down together with some student friends of mine, trying to understand what Jean Paul Sartre meant when he wrote that humans are condemned to be free. In addition to all that, this old man was talking to me about Theosophy.

Was not aware of the existence of anything like a Theosophical Society, but intrigued by his many tales, one day I asked him if he had ever joined a group or circle of people interested in Theosophy. His reply was significant; he had never considered joining any Theosophical Society because as far as he was concerned, Theosophy was wonderful, it had been a beacon all through his life, and helped him to live through the war years, but one had to be very careful with Theosophists. When I asked why one needed to show caution when dealing with them, he said that brotherhood was embedded in their first object, but that there was so much disharmony among them that, as a classically trained violinist, he couldn’t participate in what he called “Karlheinz Stockhausen’s cacophony.” (Stockhausen was a modern and controversial German composer known for using a twelve tone technique that often assaults one’s hearing.)

It took me more than twenty-six years to join a Theosophical Society. The words of my old Jewish friend had apparently been implanted in my memory, and my fascination for Theosophy was still there. From November 17, 1994 onward, as a member of the TS Adyar (much later I joined all existing Societies), I witnessed all the good but also the bad that active members in the Societies cause.

It is apparent that some people live very much in the past or gain their inspiration solely from the many conflicts that took place in the past. In an earlier editorial, I referred to that as “hijacking” a conflict, thus making it one’s own. Although good people are energetically trying to live up to what sister and brotherhood stand for, a small isolated group seems to point out continuously to other Theosophists who are not sympathetic to their cause that those others are nothing but a bunch of naïve dummies. Their contradictive, pseudo-intellectual “bla bla” is extremely boring, often referring to historical events but then hopelessly misinterpreting those, and the persons whom they condemn are always the same. Presenting themselves as gurus in need of followers, their remarks are bigheaded, repetitious, uninspiring, and unconstructive, not in any way related to what Theosophy is supposed to represent. 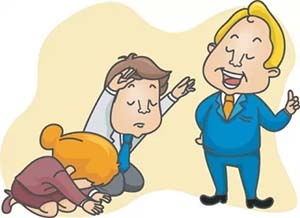 Friends sometimes send me links to threads on the Net containing such squabbles, but I cannot read those dreary epistles any longer. I do not underestimate the importance of discussions in cyberspace, but it is evident that some hardliners with their predictable one-liners who post there have simply vowed never to give up their crusade against others who they consider to be misled and dumb. Well so be it, the Law always works, so we will see.

I fail to understand why some Theosophists (are they?) are constantly dwelling on the personal egos of prominent Theosophists of the past, especially when these same folks claim to be trying to suppress the personal ego. We cannot know the full truth about Besant, Judge, Olcott, or even H.P.B. herself. Charges against any or all of them amount to gossip, one of the “sins” that H.P.B. most condemned. If we want to follow H.P.B., then let’s stop gossiping about the past and live Theosophy TODAY as sisters and brothers, no matter what each of us believes.

I may disappoint my respected readers, so I apologize beforehand, but I have never met Annie Besant, William Judge, Henry Olcott, or Katherine Tingley, let alone Helena Blavatsky, in the flesh. Oh, I wished I had! What I know of them, I know from what I read in books and what historians have passed on. So when I read about the history of the modern Theosophical movement, I read the story of women and men who all in their own particular ways tried hard to uplift our troubled world. In that process, along the way, some things went well, but at the same time painful mistakes were made; there was light, but also darkness, there was good and bad. Doesn’t that sound familiar?

I respect those old pioneers who dedicated their lives to the cause, but it’s now up to us to create a future, and we cannot create a tomorrow by constantly looking back at yesterday, pointing fingers, accusing others, slandering good people, and proclaiming our own limited truth.

We can learn from the past, but we should never judge; instead we can try to do things better and, if we fail, try again.

Let’s remain seekers first and foremost: Theosophy is not about telling other Theosophists that they are wrong. Theosophy is all about serving mankind, now and tomorrow, into the future, so let’s focus on that. Let’s do away with the cacophony, turning it into a symphony, the world is desperately waiting.

From The Voice of the Silence: The “Doctrine of the Eye” is for the crowd, the “Doctrine of the Heart,” for the elect. The first repeat in pride: “Behold, I know,” the last, they who in humbleness have garnered, low confess, “thus have I heard.”