The Victory of Strength over Power

What is the subtle distinction between strength and power? In science we use the term energy rather than strength, energy being what one delivers, and power being the rate at which it is delivered. So for example, even a weak system that expends its energy at a high rate would be powerful. One case in point would be a cat expending a sudden burst of energy springing on a mouse. By contrast a high energy system expending energy slowly would be considered less powerful; for example a bulldog slowly lumbering towards his meal.

In the psychological realm, music beautifully illustrates the difference between power and energy – let’s now use the term strength. This is because music and life mirror one another. In his 2006 Reith lectures, the legendary pianist and conductor Daniel Barenboim explained how music expresses the ineffable dimension of life; and the hidden side of life is reflected in music. Barenboim also illustrated the difference between power and strength in a graphic way. Using the example of an orchestra, if the most dominant section – the brass (trumpets, trombones, etc.) – blare away unconcerned about the other instruments, the resulting orchestral sound would have brutal power, but no strength. Conversely when each instrument listens to its neighbours, harmonizing and blending (not subduing) its contribution to the greater orchestral whole, the sound would have real strength and for that matter, a power based on strength.

The great Beethoven is an example of one who journeyed from personal power to strength. This has all to do with the use and misuse of the ego. It is sheer nonsense to declare that we can operate on the terrestrial plane without an ego. We might as well try to become a great pianist without an instrument at your command. The challenge however is to subdue the ego – the instrument – to the higher will – the pianist, in this analogy. We have to build up the ego to surrender it; surrender does not mean annihilate or destroy. The surrender and sublimation of the personal, human will to the Greater Divine Will is the supreme challenge of the Spiritual Path and one that calls forth the greatest suffering from the Aspirant.

But to submit to the Divine Will one has first to possess an identity, a personality, strong, powerful and robust as a worthy offering to hand back to the Lord. The lukewarm personality – neither “good” nor “bad” – neither “hot” nor “cold” has little to offer. The hot or good soul has much to offer and is already attuned. The cold or bad soul also has much to offer because he has developed a strong ego and just has to turn it around by 180 degrees and surrender it to the service of the Supreme, instead of the selfish service of self. Hence the saying that an enthusiastic burglar is preferable to a lackadaisical parson; or a disobedient boy has much more potential than an insipid saint.

Beethoven’s young years were certainly spent building up his ego. At this stage his  powerful ego tended to advance its own personal will rather than that of its Maker. He was extremely arrogant, forceful and self-assertive. He looked up to no one and barged into high society in Vienna with no deference. To a Court Secretary he once wrote:

“The devil take you. I don’t want to know anything about your whole system of ethics. Power is the morality of men who stand out from the rest, and it is also mine.” 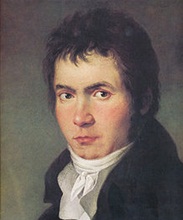 Beethoven in 1804, when he was composing the Eroica Symphony

We may usefully contrast the lives of Beethoven and Napoleon, so utterly different in their outward circumstances, but peculiarly intertwined at a subtle, inner level. Recall that Beethoven was once a great admirer of Napoleon and originally intended his third symphony to be titled the “Bonaparte Symphony” as a tribute to Napoleon Bonaparte. But when Napoleon crowned himself Emperor of the French in May 1804, Beethoven was infuriated and as legend has it, the composer ripped through the title page and tore it up in a rage and later renamed the symphony the Eroica because he refused to dedicate one of his pieces to the man he now considered a “tyrant”. Nevertheless, he still allowed the published manuscript to carry the inscription, “composed to celebrate the memory of a great man”.

This is the account of the scene as told by Beethoven's pupil and assistant, Ferdinand Ries:

In writing this symphony Beethoven had been thinking of Buonaparte, but Buonaparte while he was First Consul. At that time Beethoven had the highest esteem for him and compared him to the greatest consuls of ancient Rome. Not only I, but many of Beethoven's closer friends, saw this symphony on his table, beautifully copied in manuscript, with the word "Buonaparte" inscribed at the very top of the title-page and "Ludwig van Beethoven" at the very bottom. …I was the first to tell him the news that Buonaparte had declared himself Emperor, whereupon he broke into a rage and exclaimed, "So he is no more than a common mortal! Now, too, he will tread under foot all the rights of man, indulge only his ambition; now he will think himself superior to all men, become a tyrant!" Beethoven went to the table, seized the top of the title-page, tore it in half and threw it on the floor. The page had to be re-copied and it was only now that the symphony received the title "Sinfonia eroica."

The Journal of the International Napoleonic Society, Volume 1, No. 2, December 1998.

The following table compares and contrasts salient features of these two great men. The injunction to “kill out ambition, but work as those who are ambitious”, as stated in Rules 1 and 4 of Light on the Path is apposite. Beethoven succeeded; Napoleon arguably did not. So we can understand why Beethoven once shouted in anger that if he could command armies as well as he could write music, he would show Napoleon a thing or two!

Kill out all ambition, but live like one ambitious

We can move on to make some general observations. Tyrants such as Hitler and Stalin who have scarred the face of humanity were of course powerful; but they were weak men. They had no strength or power over themselves – their thoughts, their rapacious ambition. Conversely the beggar who sits in calm contentment at the temple door has no power, but great strength – for he has mastered his mind. 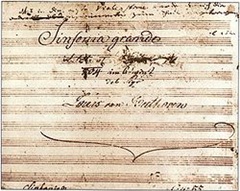 The Title Page of the Eroica Symphony, showing the dedication to Napoleon erased.

Some people in The Theosophical Society (especially those who have achieved but little in their personal or professional lives) seem to crave power at all costs: to become International President, National President, or hold some position on a committee flaunting some fancy title like Director or Chief Executive Officer. Do those who crave power have the strength to use it wisely? One recalls a wise saying from the Lebanese mystic Kahlil Gibran that it is better to court the company of a viper than that of a man who has failed to achieve the lifelong ambition he craves.

So we shall close by making a couple of observations. Firstly, that power should only be in the hands of those who really don’t want it. That way power will be used with strength and altruism, and not for self-serving ends. Too err is very human. But who or what exactly is doing the erring? Let us take deeply to heart this counsel from Sri Ramana Maharshi to the young Paul Brunton when the latter sat at the saint’s feet in his ashram in Arunachala:

The greatest error of man is to think that he is weak and evil by nature. Every man is divine and strong in his real nature. What are weak and evil are his habits, his desires and thoughts, but not himself. 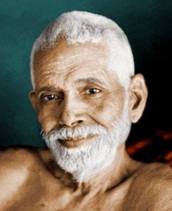