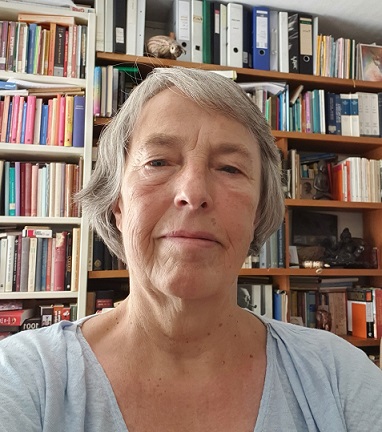 My name is Marianne Plokker. I am from the Netherlands. I live in Driebergen, a village 20 km. from Utrecht. I have been an official member of the Dutch section of the TS since 1993.

I am a member of the Amersfoort Lodge. I have given lectures and some study courses. Since September 2020 I am the editor in chief of Theosofia, the magazine of the TS in The Netherlands. Together with Saskia Campert, Wim Leys and Theo Mondij, we produce four magazines a year.

I am a third generation Theosophist (from my mother´s side). My parents (both psychiatrists) were deeply interested in different religions and spirituality, which were often discussed at the dinner table. They gave me a solid ground in religions from East and West. My grandmother told me about Theosophy. She was a longtime member of The Hague Lodge. During the beginnings of my working life I didn´t have much time for studying. Later, having met my husband, who was already a member of the Anthroposophist movement, we studied together and went to many different seminars and study groups.

The wide body of spiritual knowledge and the non-sectarian openness have always appealed to me. It is a solid guide on our spiritual path. For me Theosophy became a way of life, of dealing with the ups and downs of daily life.

There are a lot of books that have helped me through the years. My Theosophical favorite is The Voice of the Silence, but there are many others which are important to me, especially The Bhagavad Gita and the teachings of Meister Eckhart and other mystics. Recently I read the series of five novels about The Dalai Lama´s Cat, by David Michie; an excellent refresher course on looking at life the Buddhist (and the Theosophists) way.

In the West we are coping with a dwindling membership. Elsewhere Theosophy is doing better. The enthusiasm during the recent seminar of Young Theosophists and the foundation of the new World Federation of Young Theosophists I found very hopeful. The biggest challenge is to spread the theosophical message of brotherhood and unity in these times of separation, egotism and materialism. To make people see and realize the importance of caring for Mother Earth and all living beings.

I do hope that Theosophy and the TS may become ‘a guiding star’ for a fast growing number of people to lead a meaningful life, to spread kindness and compassion and ultimately to make this a better world.