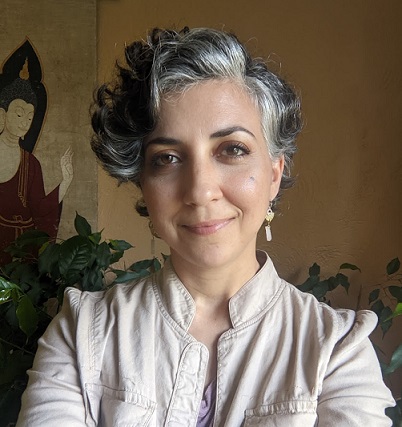 My name is Juliana Cesano. I am originally from Argentina and have been living in the USA since 2007. I have been a member of the TS since 1996.

I have been part of the staff at the National Center of the TS in the USA for the last 15 years. I wear a few hats, but most of my time goes to being the manager of the Quest Bookshop. I also teach. I feel passionate about sharing my small findings with others. I tend to focus on the transformational power of spiritual practices.

My two brothers and I were lucky to have a father who was deeply interested in the spiritual life and became very involved in the Society’s work when we were children. My father’s uncle was the founder of the Lodge I grew up in and that’s how he became in touch with the TS. I have memories of a friend and I playing in the library of the house where the Lodge met, and hiding under the chairs during the lectures in the main hall. When my older brothers became teenagers, our dad started a youth group to gather all the children of the members in the area who were interested in Theosophy. He had and still has a special skill to create enthusiasm and inspire others. He doesn’t remember how old I was when I started attending the youth group meetings but he remembers that when sitting on the chair my feet didn’t touch the floor. That group encouraged several other youth groups in the country. After a few years we started meeting at the National Center in San Rafael during the summer and organized our own retreats twice or three times a year. Dad became the General Secretary of the Section at the time I formally joined the TS as a member, at 17. He supported the youth movement wholeheartedly and gave us license to do many things that we probably wouldn’t have been allowed to do if it wasn’t because he trusted his own children. I was one of the youngest ones and till today, the friendships I formed back then are still my closest ones. While sitting in circles under the trees, reflecting on the teachings of Light on the Path and so many others, meditating in the mornings, and cooking our own meals, we forged something much more meaningful than we could have possibly imagined.

I was asked this question before, and the answer is still the same: everything. Like many others reading these words, my days turn around the notion that we are One and every day is a new opportunity to drop another veil that will make that reality more and more transparent. My daily energy goes to support the Theosophical Society and its mission in this suffering world.

So many books have inspired me profoundly, both written by TS members and by mystics of different traditions, that I cannot pick one. The same with people. I have been inspired by so many people inside and outside this movement that I can only express gratitude to all of them. Sometimes reading outside the so-called “Theosophical books” into the teachings of different world religions helped me greatly to understand Theosophy better, and have glimpses of the golden thread connecting them all. But with time I have come to realize that a book is just the very beginning of a much longer and richer process. Although I cannot name my favorite book, I can certainly name my favorite practice, which is silence.

I think the TS faces challenges continually and in many directions. Some challenges are very specific to certain areas of the globe. Theosophists share unique behavioral patterns in different countries, so the challenges are a bit different in each region. But what I can venture to say is that one of the challenges we face is recognizing that each one of us comes with a different temperament that needs to be perceived, acknowledged, and nurtured. That is how we make this life our home. When we don’t feel at home, life is hostile. So, making the TS a home for all temperaments, and encouraging one another in our strengths is one of our challenges. That requires a certain open mindedness but also a clear seeing–the ability to see the other with a type of love that reveals to us how to aid and encourage them in their own path. Then, at the root of all challenges, is the risk of staying on the surface of teachings instead of becoming spiritually mature. Becoming good at talking about things we don’t know how to live.

More than anything, I wish the world to become a living embodiment of the theosophical way of being. That the Divine Wisdom becomes a reality in the hearts of all people so that there is no longer a need for a Theosophical Movement.