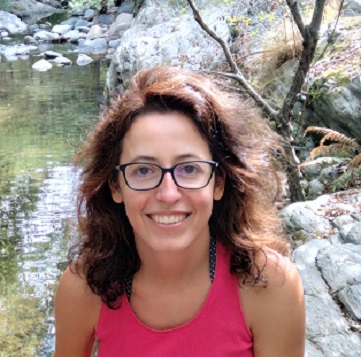 My name is Sara Ortega van Vloten, I am from Barcelona (Spain) and I became a member of the TS in 2008.

When I first joined I was quite young and started attending lodge meetings. About three years ago, I had to move for work where no active lodges were found nearby, and soon after, the pandemic started with so many lockdowns, that TS activities were held online instead. On one hand, this change of scenario allowed for many members to connect with more fellow members across the world. And particularly for me, it was an opportunity to become more active, by helping in various ways both in my Section and at an international level: from supporting the technical organization of meetings (Spanish Summer School), contributing with translating and subtitling (Adyar International Convention), collaborating with Spanish translations of The Theosophist, and lately joining the Spanish team of the School of Wisdom. Over a year ago, I joined along with other young TS members the Movement for the revival of the World Federation of Young Theosophists and we started working for a new constitution which is in the making. Also at the moment I belong to the committee that organizes the International gathering of young theosophists that will take place in June 2022 at the ITC Naarden (the Netherlands), which is very exciting to be able to meet in person and spend some time with other young members.

In my case, I came to know Theosophy gradually during my upbringing and specially through my grandparents from mother’s side who dedicated their lives to the TS work. My grandpa was during many years the housekeeper of the International Theosophical Centre (ITC) Naarden where I spent many summer holidays during my youth. My grandma was very active in the Barcelona lodge, and I remember many good times that I spent with her while talking about theosophical teachings which for some reason resonated with me deep within. When I grew up it felt natural to join as a member of the TS, but only after some years later (in my early thirties) I felt that I needed to be useful from a practical point of view, and it was time for me to start working more actively.

To me Theosophy encompasses both exoteric and esoteric teachings of ancient traditions all of which carry a piece of the Eternal Truth which is destined to unite humanity in Love and Harmony. The foundation of the TS in 1875 was a new impulse towards the realization of Universal Laws, and to help unveil the Truth that remains hidden due to our conditionings, prejudices and illusions during our lifetimes in the physical world. I believe we can be grateful if we come into contact with Theosophy, or when we meet people who are dedicated and lead their lives aligned with its principles, or when we have access to books that show to us endless horizons, bringing some light and pointing the way of evolution, our relationship with the cosmos, with humans, animals, plants… Overall, life acquires a new inner dimension that can bring inner joy when one learns how to put order and harmony in the former chaos.

After pondering about it I don’t think there is any book that I can call my favorite over the rest. Sometimes you may resonate with something you read, but that has to do more with the reader’s state of consciousness at that very moment rather than with the book itself. Usually theosophical books can be pointers of deeper realities, but we must develop some kind of discernment or intuition to discover new realities of our own and through daily living. No doubt there are very well-known theosophical books which are written for the soul and for aspirants on the spiritual path, that describe the different stages on the way, the inner tools one needs to develop on that journey and more, all that being explained in a poetic way full of symbology that usually encapsulates multiple layers of meaning at different levels. To me, everything that deals with the scheme of evolution, universal laws, anything that goes beyond the superficial side of things, is very inspiring and infuses a new kind of energy that drives our lives to be more connected with the One Life. To mention one book, recently I read the Buddhist Catechism by H.S. Olcott, and I liked the simplicity and yet depth that transpire from the four noble truths. In my view it is important to have an open mind when reading, and afterwards to spend some time inquiring on how we actually lead our lives, how we can truly assimilate those new truths we come to know through reading, and which must be translated somehow into daily action, if they are not to remain as merely theoretical ideas.

The TS as an organization is alive because of the collective work done by its current and past members, starting with its founders. Many have contributed greatly to the dissemination of theosophical teachings and promoting its three objects. However, I would say that the TS would benefit if more younger members could be in contact with such knowledge and become active members. At the same time, I realize that the general society we live in is much more focused on the outer materialistic side of things, with so many distractions that prevent bringing attention to spiritual matters at a deeper level. To find out the way in such a society is I think a big challenge nowadays, especially for the youth, but as humans I believe we all reach a point in our lives when we start asking fundamental questions, sooner or later, either because of genuine curiosity or because of a crisis, a point when out of suffering we may face the right circumstances that make us turn our attention to seek for spiritual answers. It is important that the TS can make itself more visible and accessible for those who seek answers, and at the same time every member has the privilege and responsibility of becoming a living example of what Theosophy teaches. That may not be an easy thing to do, as it asks for self-transformation through study, meditation and service, but that is how we can bring about change in the world, by changing ourselves for the better, and as a consequence by uplifting the work of the TS as a whole.

If I imagine an ideal future, I would see a society where education would be considered in terms of helping children to develop in a holistic way, considering the whole constitution/principles of man and encouraging the exercise of virtue and brotherhood in a well-cared environment. There are already various models of alternative schools, including Krishnamurti, Golden Link College, Montessori and others, also there is the Adyar Theosophical Academy, and it would be wonderful if more and more theosophical schools could be spread over the world giving access to all children for such an education. Annie Besant once said “What, after all, is the object of education? To train the body in health, vigor and grace, so that it may express the emotions in beauty, and the mind with accuracy and strength”. Children would then become young adults that consider their life and place in the world among all humanity, and they would consciously work together for the betterment of all forms of life. That is my wish and hope for the future.