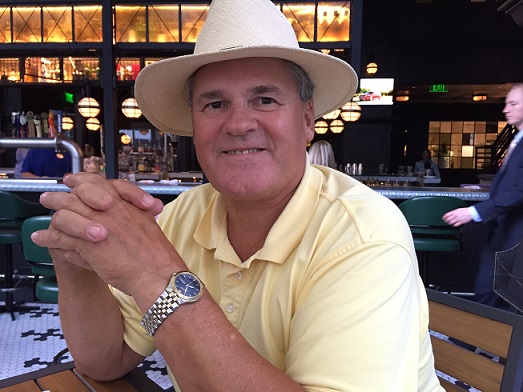 My name is John Powers, and I currently live in Norfolk, VA, being originally from Santa Barbara, CA. I am not a member of the TS, but I read the TS communications and journal regularly and take part in the yearly world-wide convention.

I am not a member of any TS Lodge or Section, though I have been an associate of ULT Santa Barbara since 1968 and now live in the eastern United States.

I first learned about Theosophy from a fellow student when I was at the Univ. of California in Santa Barbara in 1967. My student friend invited me to a small meeting of Theosophists who were holding lectures at a home in Santa Barbara. That is where I first met Prof. Raghavan Iyer and Prof. Nandini Iyer, who later founded the ULT branch in Santa Barbara, and the first lecture I heard there was delivered by Prof. N. Iyer on HPB's Psychic and Noetic Action. I was both deeply stirred and smitten with astonishment at this lecture, and that began my effort to try to understand this synthesizing system of spiritual knowledge called "Theosophy".

Well, it means to me pretty much what HPB described in The Key to Theosophy as "the aggregate of the knowledge and wisdom that underlie the Universe – the homogeneity of eternal GOOD; and in its concrete sense it is the sum total of the same as allotted to man by nature, on this earth, and no more." That abstract sense of the term is, in a sense, unchanging; the concrete sense - that "sum total" - changes as further dimensions of the Wisdom Religion have been laid bare by the Teachers of the Seven Century Plan (initiated by Tsong-Ka-Pa in the 14th Century) who have come to the West to inaugurate successive periods of spiritual activity to wake up the race of men to the existence of this eternal Wisdom and Those who preserve, protect and periodically promulgate it actively among men. Many Theosophists see these spiritual "Impulsions" as a reality, at least up to and including the Sixth Impulsion that took place in the 19th Century, but some do not see that the culmination of the Seven Century Plan - the Seventh Impulsion of the 20th Century, also known as the 1975 Cycle - also took place, although without a lot of fanfare and public notice. But that was deliberate on the part of Those who stood behind each of the 7 Impulsions—as one of Their number indicated (in a note published by A.P. Sinnett), it was a precondition of their success that they should be able to do their work without being spied upon and "supervised or obstructed". Those who think the "1975 Cycle" did not happen - that the Masters somehow decided, despite their repeated statements to the contrary, to forgo the culmination of 700 years of effort - might wish to think again.

Without a doubt, that would be Prof. Raghavan N. Iyer's The Gupta Vidya (published by Theosophy Trust Books in 2019). That 3-volume work is a compilation of essays Prof. Iyer wrote over the 14-year period of the full extent of the public work of the 1975 Cycle for his journal, Hermes (the original Hermes essays are available on the Theosophy Trust website). The Gupta Vidya is extraordinarily profound; it deals with the incredible metaphysics of The Secret Doctrine, providing explanations of its most difficult doctrines to the student that require—as does The SD—strenuous intellectual as well as ethical efforts. It is, in many ways, an elaboration and application of the Teachings of The Secret Doctrine, and it is magnificent as an example of the modalities of the accredited Teachers of the Wisdom Religion in striking an uncompromising keynote of universalized thought and universal compassion for all the struggling monads in evolution.

I think the challenge for all Theosophical traditions is to come to terms with the reality of the 1975 Cycle and its Teachings; to refuse to be caught by the controversies of the past century and previous ones; to avoid being distraught or distracted by the chaos of all the karmic precipitations of the early part of this "transition period"; and to look to the grand vistas that are opening to the current Fifth Race as the Aquarian age unfolds. To this end, Theosophists should continue to disavow all separatist tendencies and work steadily to reach out to all other Theosophists in a magnanimous spirit of Unity of Aim, Purpose and Teaching to promulgate the non-sectarian spirit of true Theosophy.

As noted above, the Theosophical Movement now needs to focus upon the promise of this "transition age" described by Mr. WQ Judge: "What we do now in this transition age will be like what the great Dhyan Chohans did in the transition point – the midway point in evolution – at the time when all matter and all types were in a transition and fluid state. They then gave the new impulse for the new types, which resulted later in all the vast varieties of nature. In mental development we are now at the same point; and what we now do in faith and hope for others, and for ourselves, will result similarly on the plane to which it is all directed. Thus in other centuries we will come out again and go on with it."

We have now completed just over one-half of the 2nd degree of the Aquarian age, and already we are seeing stirrings in our Race that portend the hallmarks of the coming Aquarian man. Members of the TS and all other Theosophists from whatever organization would do well to deeply reflect upon the unfolding of "true spiritual will, the conscious direction of energy by intelligent ideation and self-conscious volition," which is "the supreme criterion and sovereign talisman of Aquarian humanity." As students devoted to this Movement, we should learn to look deeply within ourselves to find those "internal reservoirs of Akashic energy and ideation potentially available to the aspiring human soul" that are "virtually infinite."

"He who has ears to hear will hear what has thus been said" by the Founders and Those Great Ones behind them. The Maha Chohan’s Letter is our touchstone for all Theosophical effort.