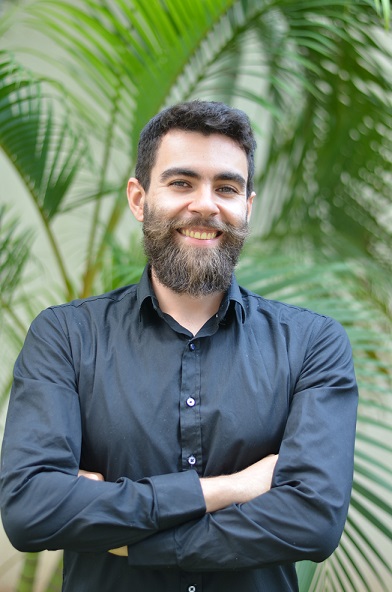 During the current pandemic Lodge activities started to take off online, with transmissions via Zoom and YouTube. This has allowed my activities to transcend the physical space of the Lodge with which affiliated and that is why I have been participating in activities in several other Lodges all over Brazil and Latin-America. My activity at the TS consists of developing and presenting introductory courses and lectures on different topics. In recent years I have presented ongoing studies on Tibetan Buddhism (mainly based on the Lamrim of Je Tsongkhapa), Kabbalah (in its different presentations in the West), and the convergences and divergences between Occultism/Theosophical writings and Psychoanalysis. In 2020 I presented a weekly study on Vivekachudamani (from the Advaita Vedanta tradition) and more recently have given presentations on Tibetan Buddhism and Lamrim at the Inter-American Theosophical Federation.

My father was a member of a Rosicrucian Order over 40 years. So, I grew up in a home with a rich family library that included writings on Western and Eastern Mysticism, Freemasonry, Alchemy, Buddhism, and the books of H.P. Blavatsky. After many years of private study, I decided to join the TS.

Theosophy, I believe, is a continuous effort of groups of sincere people who want to reflect more and more deeply on the basic questions that the human being asks himself (where did we come from? where are we going?) using the various tools available (philosophy, science, and religion). I don't like the problems caused by the theory-practice duality. Theosophy teaches me that this duality is totally artificial, created by the Western mentality. Finding the Wisdom that has been put into words (theory) will impact my daily practice in some way, either by fracturing my certainties, or by making me reflect on myself. For me, living Theosophy is breaking the barriers between theory and practice, and not thinking that one is better than the other, since both are one.

I don't have any. Any writing that instigates the reader to reflect is good and useful. In my opinion, books are not intended to be absolute guides, but rather to "force" the aspirant to go beyond his certainties and intellectual limitations. Despite not having a favorite book, I can share which book has impacted my life the most. The Voice of Silence was the theosophical book that revived my spiritual quest in Buddhism. For a long time, I didn't realize that there was an esoteric aspect to Tibetan Buddhism other than what is publicly presented by Tibetan orders that have been established in the Western. Reading The Voice of Silence was like peeling back the outer most cover of what I understood as the esoteric in Buddhist teachings. Every time I read this gem I feel that I need fewer words to explain to myself what I find in this book. I believe this is a small free sample of what the direct experience will be. This feeling, as well as the teachings themselves, make this book so special to me.

In the current era of vertiginous changes there is the challenge of living well with impermanence but preserving what is essential for future generations. This requires of us the discernment to distinguish the "accessory" from the "essential". We have never had so many changes and so much information available at the same time. How to deal with the changes and filter the information that comes to us living in the world? Discernment is needed more than ever.

To make the theosophists themselves vehicles of the dissemination of Theosophy, not only by lectures and courses, but by personal transformations that make the theosophists experienced in the human capacity of opening the mind with discernment. I believe, as H.P. Blavatsky says in The Key to Theosophy, that there are many more theosophists outside than inside the TS, and this should be encouraged. I think we should look forward to a TS that is the catalyst of theosophical thought, but also that Theosophy should transcend more and more the Lodges and events and becomes part of the everyday life of mankind.

Opinions and ideas expressed in the mini-interviews are exclusively of those who are being interviewed. They do not necessarily represent the ideas and opinions of the compilers of Theosophy Forward. The responses of the interviewees are not edited for content. Some contributors give short answers to the questions while others touch upon the subject more elaborately.