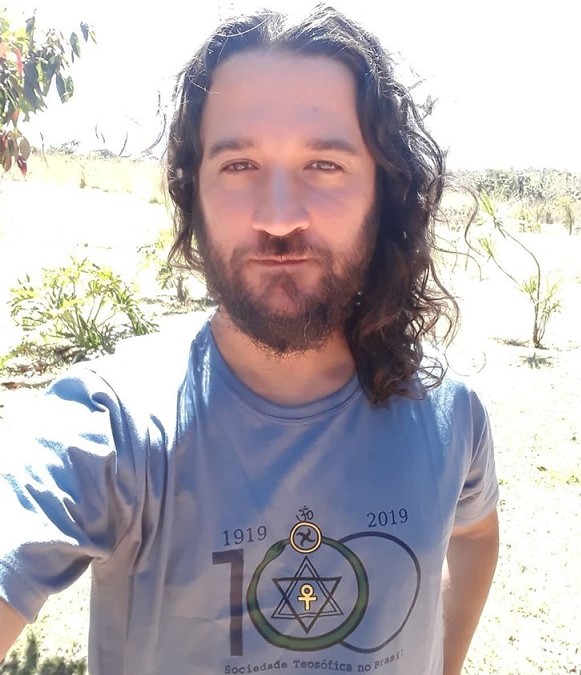 My name is Charles Angelo Boeira, I'm from the south of Brazil, now residing in Brasília, the country's capital. I have been attending events of the Theosophical Society since 2005, but I only became an affiliated member in 2015.

I am currently the president of  the Jehoshua Lodge (founded in 1911), and I am also a national speaker, writer and aide in advertising and digital media. I work for the marketing department of the Brazilian theosophical publishing house.

In 2001 I created an eclectic study group, where half a dozen friends met weekly to study different spiritual texts. Each week someone suggested a theme for the next week. One day someone suggested theosophy and we were amazed at the similarity between our thinking and the work we were trying to do. We got in touch and held a seminar in the city with experienced Theosophists. We have kept in touch ever since, always in dialogue with groups and lodges, and reading theosophical books.

An unpronounceable wisdom (found in silence? … perhaps ...), omnipresent, that permeates our reality, possibly the knowledge of reality itself. We study comments on this timeless wisdom, and we try to approach it as far as we can, gradually, step by step.

Helena Blavatsky's The Voice of Silence. I like shorter books that provide meditation objects, so that we can feed and transcend the intellect. HPB's poetic language is also beautiful, and it increases the pleasure of reading.

There are many challenges, the theosophical movement has many problems, from the reduction of members to social invisibility. We are also experiencing many generational conflicts, and a difficulty in transferring to 19th century thinking, it seems to me with the passage of time that we have become timid and have stopped participating in several current and relevant debates in the world. There are many dialogues in the world taking place today (some very theosophical), and we are not participating, we have become largely book reviewers, in many instances we are an esoteric book club. We need to reconnect, participate and transcend our failures.

I hope that the theosophical movement can transcend its historical problems, that it can relearn not only to look at books, but also to look at the world and humanity, with wisdom and empathy. May we gradually become better tools for the work of the Masters, a bridge between their wisdom and the world of humanity, helping the world to improve in every way.