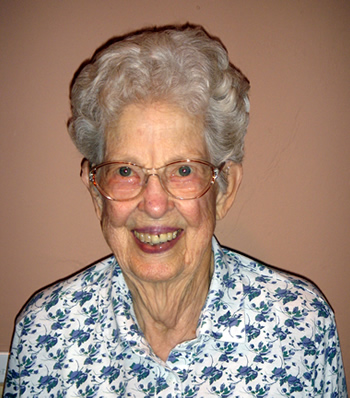 On October 9, Joy Mills attains the glorious status of nonagenarian. Ninety is, of course, ten (the perfect number) times nine (which has remarkable qualities in mythologies and esoteric systems all over the world). Nine is said to symbolize successful search and creative fulfillment. For Theosophists all over the world, Joy is Madam (or to be as up-to-date as she always is, perhaps we should say “Ms”) Theosophy. No one else has served the Society in more places and in more ways than she. No other living soul is better known around the globe or more widely admired than she. No one else has been more perfectly successful in the search we are all engaged on or has more creatively fulfilled their raison d’être.

Joy Mills links generations, plays a significant historical role in the Society, influences numerous lives, and embodies the values of important cultural, religious, and philosophical lineages. She has been a student and a teacher by both profession and avocation. Her bachelor’s degree was from the University of Wisconsin-Milwaukee; her master’s in English literature was from the University of Chicago; her additional post-graduate study of American history was at the University of Washington; but her greatest degree of learning was earned in the school of Theosophical living.

Joy joined the Society on August 31, 1940, commencing her long engagement with wisdom and service in a far different, war-shadowed world. She served the Society in many roles through the following decades. As the first woman president of the American section from 1965 to 1974, she expertly guided it through the difficult era of struggle for civil-rights and created the Quest Books imprint for the Theosophical Publishing House in Wheaton. From 1974 to 1980 Joy served as the Society’s International Vice President, residing in Adyar; she has served continuously since then as a member of the Society’s General Council. Returning to the United States, she directed the Krotona School of Theosophy from 1980 to 1992, attracting students from around the Theosophical world and elevating the School to new heights; she still continues to serve on Krotona’s Board of Trustees. From 1992 to 1995, she was president of the Theosophical Society in Australia, the only Fellow who has served as president of two national sections.

Joy has authored many articles and books. The latter include 100 Years of Theosophy (a history of the American section), Entering on the Sacred Way: A Psychological Commentary on “Light on the Path,” From Inner to Outer Transformation: Lectures on “The Voice of the Silence,” Living in Wisdom: Lectures on “The Secret Doctrine,” and The One True Adventure: Theosophy and the Quest for Meaning. Her magnum opus, however, is her most recent book, Reflections on an Ageless Wisdom: A Commentary on “The Mahatma Letters to A. P. Sinnett,” which is the fruit of her many years of studying and teaching The Mahatma Letters and which will doubtless remain the definitive commentary on this basic Theosophical text in the foreseeable future.

In brief, one can say of Joy what Geoffrey Chaucer said of one of his Canterbury pilgrims, the Clerk of Oxenford: “gladly wolde [s]he lerne, and gladly teche.” Joy has been a student, a mentor, and a friend of Theosophists worldwide. Her character and her approach to Theosophy have inspired all those who have had the privilege of knowing her. Speaking of her ninety glorious years is no empty accolade, for however much she ages, her mind grows ever more open to new ideas; her intellect ever more eager to understand everything in religion, philosophy, and  science; her spiritual perception of the eternal truths of Theosophy ever more unveiled; her dealings with her fellow Theosophists ever more brotherly in readily giving and receiving advice and instruction; her sense of duty to the great teachers ever more loyal; and her eye ever more focused on the ideal of human progression and perfection which the secret science depicts.

Joy's life is one we can all celebrate because it is so inspiring and she is sharing it with all of us.