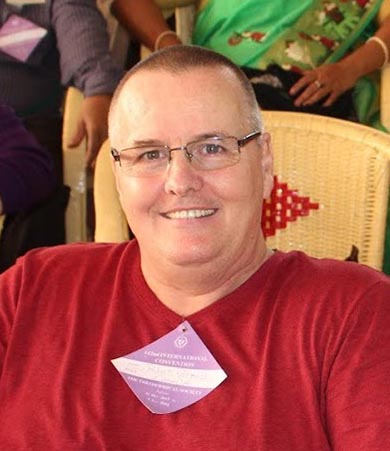 My name is Robert Béland and I live in the province of Québec, Canada. I became a member of the Theosophical Society forty years ago.

Besides being the Vice-President for the Canadian Theosophical Association, I strive to increase transmission of information regarding Theosophy in French. I also work with a small team who recently published a website (www.theosophieauquebec.com, “La Théosophie francophone”), as well as a Facebook group (“Théosophie francophone”). Of course, I am also quite active within my lodge in the small community I live in, Val-David.

At the age of 18, I met someone who became a friend, who introduced me to Theosophy and to the Montreal Lodge of the Theosophical Society, which was led by Mr. Phan Chon Ton at the time.

Maybe this lacks a bit of originality, but to me, Theosophy means Divine Wisdom. What I mean by that, to paraphrase Danielle Audoin, famous author in the France Theosophical Society, Theosophy is not the same thing as the Theosophical Society or any of its writings, even those of the most famous Theosophists. It is of great importance to always keep an open mind and to try to conceptualize, to the best of our human abilities, a comprehensive vision of “What Is”.

It is At the feet of the Master and for two reasons. First of all, its content is easy to understand even for beginners, but is rich to allow experienced Theosophists to deepen their understanding (even after forty years of studying, in my case). Secondly, as a principle, I prefer small books, as long as there is proper content. Although, we can provide an explanation or a vision of “What Is” by a simple or complex method, for many, the complexity can lead to getting lost in confusion and details.

Quantity, quality and balance. I think our membership should increase. Considering that our membership had decreased by half since before the Second World War, and that the world population has more than tripled since then, I think we should wonder why that is. However, it is equally important to have a method and balance in our strategy, both to increase, but also to keep and even raise the quality of our members.

I would like even more unity, though I've noticed an improvement over the past few years, I think it's fundamental that all the Theosophical movements and I would even say, all of the spiritual movements, find a way to work together despite their differences. I believe it is vitally important for our planet, its inhabitants including all the kingdoms of nature, that the greatest number of people understand as quickly as possible, that the differences between the movements are not problems, but rather solutions to foster the evolution of the world, a world which, as we know, manifests itself in an infinite differentiation.

From the editor:
Opinions and ideas expressed in the mini-interviews are exclusively of those who are being interviewed. They don’t necessarily represent the ideas and opinions of the compilers of Theosophy Forward. The responses of the interviewees are not edited for content. Some contributors give short answers to the questions while others touch upon the subject more elaborately.