Editorial - Greed is a disease

Greed is a disease

The world’s most devastating illness today is greed. The greed virus has fully infected our behavior and even more lamentably, our thinking. Greed has influenced how we deal with others, the environment, politics, education, religion, our sexual conduct. Human beings are even willing to go to war because of greed; it has made us earthlings corrupt. 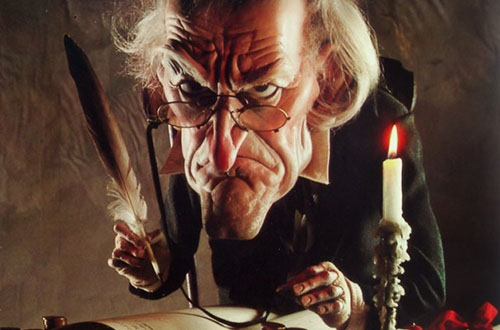 In most dictionaries greed is described as follows: an intense and selfish desire for something, especially wealth, power, food, or other possessions

On a website that didn’t mention the name of the author, I found this quote:

“Money and greed are powerful forces that become corrupting influences on people and their environment. As money is seen to equal power, the wealthy people therefore are seen to have more power, giving them more authority over the poor. This creates a separation in the different socio-economic classes, which ultimately creates inequality in a community. Because of this, greed comes into play, causing chaos as violence erupts in order for a person to obtain what they want. Corruption is seen as those who have higher authority are able to abuse their power and get away with it.”

Greed is one of seven basic character flaws or “dark” personality traits. We all have the potential for greedy tendencies, but in people with an especially strong fear of lack – deprivation – greed can become all-consuming. 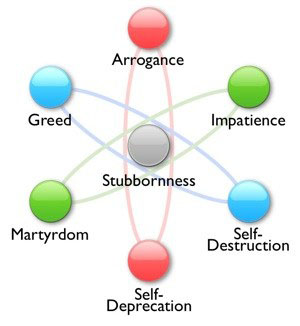 A person can become utterly fixated on seeking what they “need”, always trying to get hold of the one thing that will finally eliminate the deep-rooted feeling of not having enough. That one thing could be money, power, sex, food, attention, knowledge … just about anything. It could be something concrete or abstract, real or symbolic. But it will be something very specific on which the entire need-greed complex becomes fixated. Once that happens, life becomes a never-ending campaign to acquire as much of it as possible.

I cannot think of a better description. It should worry all of us! If we take it one step further, we can observe that those who have, invariably suppress the ones who don’t. Greedy politicians, claiming that they know, mislead with false promises those who do not know. The all-mighty stock markets are all determining. It cannot be denied that just a few at the top control the vast majority of our world’s population: inequality from A to Z. When we look back at our relatively recent history, let’s say the last 2,000 years, we must conclude that in spite of all of our technical and materialistic advancements, we still behave like a silly bunch of egoistic wastrels, not much better than the Neanderthals who have purportedly preceded us.

Our blue marble called Planet Earth has turned into a global village. We are the villagers who apparently prefer to live in tribal rivalry, drawing surreal divisions called borders, rather than understanding that the lines we draw are actually non-existing. When astronauts take a journey into space and orbit the planet, they can’t see borders; there is no physical evidence of any actual divisions. We divide because we are greedy: this is my land, not yours; this is my religion, not yours; this is my conviction, obviously better than yours; this is my intelligence, superior to yours.

I always find it staggering that we have not learned much from our past, while the same painful issues repeat themselves again and again. I already mentioned our recent history, but what about the history that goes back 10,000 or 20,000 years? I make this point to demonstrate that due to our being greedy, we have lost track of who we really are. We could ask ourselves the simple question – “Where were we in terms of the state of our consciousness before we went wrong and started to draw lines?” Some 20,000 years ago the regions or countries we know today didn’t exist. The long-forgotten ancestors of the Dutch didn’t live in what we now call the Netherlands. The ancestors of the French, the Germans, and the English – didn’t live in France, Germany or England. Most probably, these ancestors originated from other parts of what we now call Europe, Asia or Africa, not to speak of the so-called newer continents of the Americas, or the Oceania region. The peoples that lived in Atlantis or Lemuria – and here we are talking about a history that goes back far further – moved to other areas on the globe when the land they lived on, over a period of hundreds of thousands of years, slowly submerged.

So when we come to look at it, during the periods we are on this plane, we are eternal migrants, moving from one place to another. We might settle somewhere for a longer period, let’s say for a couple of thousands of years, but after that, often for multiple reasons, we move on, just as we have been doing for aeons.

Because of deep-seated possessiveness or greed (the latter is most definitely a mental ailment), people think they own the land where they are temporarily living. In order for the land appropriators to become “landlords” many of the indigenous peoples that are already there, become ousted or slaughtered to make way for the so-called “new owners.”

As representatives of the One Life we don’t own anything. Instead we belong to the lands of Mother Earth. We are an integral part of her. Consequently, it is utterly stupid and against the laws ruling nature to erect barriers, or, out of fear to build walls to keep the “others” out. Others, who like so many, ever since we began to walk the planet, are fleeing from whatever, in search for a better future, a more decent and just environment and an all-encompassing freedom.

Walls have never really brought any long-lasting solutions! In around AD 122, the Romans started to build Hadrian’s Wall. It was a defense fortification built in order to “protect” the Roman province of Britannia from invasions by “barbarians”, from what we now call Scotland. Well, that didn’t quite work out so well. The Great Wall of China was built to protect the Chinese from raids from the north. It did achieve this to a certain extent, until the Mongols in 1211 simply rode around the walls and invaded parts of China, inflicting a terrible defeat to the Chinese emperor and his armies. We all know what happened with the Berlin Wall on November 9, 1989. This awful construction, which lasted 28 years, was built not to keep people “out”, but to keep them “in”. The protective walls that the Israeli’s constructed during the Second Intifada to defend Israel against the danger of the Palestinian uprising, might have brought the number of suicide bombings on Israeli soil down, but until now has seriously hampered the so much needed peace process. Barriers can even make things worse. When a wall is built and a permanent solution postponed, its builders run the risk that the temporary fix will worsen the problem it was designed to alleviate. It will risk even greater disruption to connections between cross-border communities and increase environmental destruction. 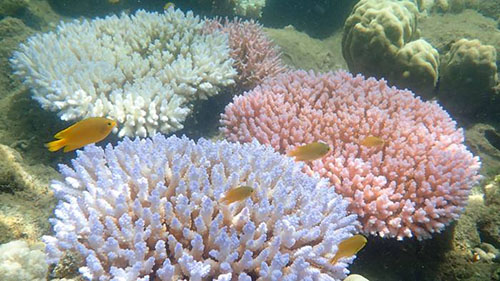 The Great Barrier Reef … before huge parts of it were “bleached”

Since we know, Theosophically, that we are all interconnected, artificial, “greed-based” mindsets of separation serve but to obstruct our growth. Greed cannot and will not bring us together. Instead it will cause wars, famine, draughts and corruption. It will ultimately destroy our environment. Look at what is happening with the Great Barrier Reef off the northeastern coast of Queensland, Australia: ecological destruction because of political greed. (1) But that is not why, as a species, we are here. There is undoubtedly another purpose for our being, especially when you think of this profound interconnectivity. In spite of our deceptive and destructive notions of separateness, we are literally breathing the same stuff Leonardo da Vinci, Jesus, Gandhi and Buddha did.

It is clearly time that we do away with greed. We need to become willing to share with others, even if it is only a little we can share. Money should not control our lives. We need to master our desires, count our blessings, enjoy what we do and always follow our passion. Most importantly, all of us need to bring the First Object of our Society into practice, realizing that a NUCLEUS of Universal Brotherhood is to be formed. HPB made this very clear. (2) A nucleus that is able to set the right examples.

I was deeply moved when a friend of mine in Athens Greece, shared with me that she and her husband had decided to adopt a young refugee girl, from a somber and very troubled region. The child had not only lost her family, but had also witnessed her mother’s decapitation by local religious fanatics. The traumatized girl had landed on the Greek shores as a boat refugee and was taken in by two loving folks, who, in spite of the severe economic problems Greece is facing, were willing to open their hearts and doors, offering her a well-deserved bright future.

In a world with so much suffering and pain it is essential to radiate kindness, to share and show compassion, banning greed out of our lives for good. So: SET EXAMPLES.

(2) From: Promulgation of Theosophy. This excerpt is from an address given by William Judge in London, at the close of the European T.S. convention, July 15, 1892.

It was previously published on Theosophy Forward with an article entitled “Is a nucleus elitist?”