This interview was first published in March 2014 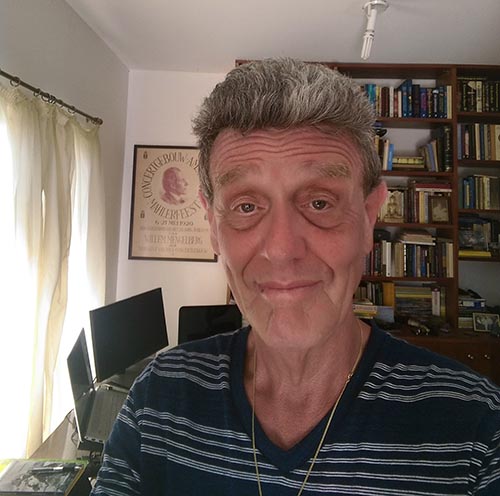 My name is Jan Nicolaas Kind, I am originally from Amsterdam in The Netherlands, and I first became a member of the TS–Adyar in November 1994. Later I also became affiliated with the TS–Pasadena and the United Lodge of Theosophists. My good friend, the late Henk Spierenburg always told me that if one cannot beat those Theosophists it’s better to join them all. At present I live in Brasilia, the capital of Brazil.

I have held several positions in The Netherlands, Brazil, and India. Now I am not active in any Lodge in particular, but serve as editor-in-chief of the independent Web magazine Theosophy Forward and work for ITC, International Theosophy Conferences Inc., currently as co-host for the 2014 Naarden conference taking care of all publicity matters.

It was in Amsterdam during the famous sixties, then a long-haired hippie, when I first heard about Theosophy from a Jewish violinist with whom I had become acquainted. I was fascinated by his stories about the laws of cause and effect, our place in the universe, the one-life, and his sublime interpretation of what compassion is all about. It took me more than twenty-six years, a lot of soul searching and a few travels around the world actually to become a member.

Theosophy is a coherent system of thought. The esoteric doctrine embraces the three pillars of our thinking: science, religion, and philosophy. For me personally Theosophy became the ultimate eye-opener, for which I am forever grateful.

This is a very difficult question. Let me just say that I am in particular touched by the writings of William Judge and Robert Crosbie because of their profound simplicity, here I refer to their complete oeuvre. Annie Besant’s In the Outer Court and especially Thought Power are gems; also the works of Gottfried de Purucker such as Fountain Source of Occultism and The Esoteric Tradition are invaluable. The wonderful essays by Boris de Zirkoff are a joy to go through, and from the typical Adyar authors I enjoy reading I. K. Taimni’s books as well as some of C. Jinerajadasa’s earlier publications. The Mahatma Letters to A. P. Sinnett and all that H.P.B. wrote, especially The Voice of the Silence and The Key to Theosophy, are all-time study books that I greatly appreciate.

In 2010, I was fortunate enough to get to know Sally and Jim Colbert from Julian in California, who had been working for International Theosophy Conferences (ITC) for many years. Through them I was introduced to this organization. This unique initiative offers a platform on which Theosophists from all the various traditions can meet. In the past, attempts were made to come to a “constitutional” unity, one large Theosophical organization. This idea, I must emphasize, is no longer feasible. All traditions, respectable as they all are, definitely have their own places, relevance, and something distinctive to offer. That, by all means, should continue. When we refer to Theosophical unity in the 21st century, we refer to primarily a spiritual unity. So it is a challenge to bring all those who call themselves Theosophists together in a spirit of compassionate brotherhood, whereby particularly the art of listening is being exercised and mutual respect and understanding are achieved. So, the biggest challenge in my opinion is to further develop that idea. H. P. Blavatsky handed out much when she reintroduced the old wisdom that had long been forgotten; and that is precisely what unites all Theosophists, both those affiliated with the various organizations and also those who operate independently. When all of them gather once or twice a year under the banner of ITC, they can explore ways to ensure keeping Theosophy alive for future generations. ITC folks put it very clearly: “Not back to Blavatsky, but forward with Blavatsky.” In many of its publications, ITC refers to the following phrase, which is significant but also simple to understand by those not yet familiar with what this organization stands for: “... further explore the Path that all Theosophical traditions can follow to serve mankind in togetherness, respectfully and constructively, spiritually, and cooperatively untied, while each tradition remains loyal to what it holds and advocates.”

Is there anything to wish for about something that always was and always will be? I believe that the movement will take care of itself, so it all depends how one interprets this question. I wish that all those who feel attracted to the teachings, one way or another, would discover that being a true Theosophist means that one is committed at all times, for better or for worse. Too often some consider the Theosophical Society as their own little and exclusive playground, as if it were a kind of stage in a theatre where they can play their self-imposed roles as dominant figures or even as protectors. When egos are diminished to an absolute minimum, I see quite the opposite: a kind of eagerness is displayed, while hunger for titles, positions, or importance disappears. Some people consider themselves to be the “guardian angels” of Theosophy. How wrong can one be? Theosophy exists, and all we need to do is to serve it as humbly and silently as possible. Titles, so-called prominence, and positions are part of the material world; and that is where the phantom of spiritual materialism looms. So, again, if there is such a thing as a wish to be shared, I sincerely wish that all who are active in the Theosophical arena, in whatever tradition or independently, realize that there is but one reason why we’re here in this incarnation, on this planet, in this round at this level of consciousness and development, and that is to help those who are less fortunate and those who will come after us. Doing that requires unconditional commitment.

We have 406 guests and no members online