This interview was first published in June 2012 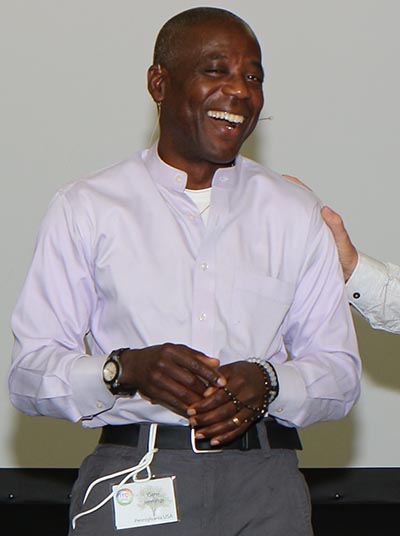 I remain active in the New York lodge as time allows, contributing to the Wednesdays classes as chairperson, when not conflicting with my work schedule; contributing to the Sunday evening presentations by giving talks, answering questions or participating on panels; and contributing to the quarterly NYC – Philadelphia – Washington inter-lodge symposium meetings when scheduled throughout the year.

My first contact was with ULT. I read about HPB and Theosophy during my formative years in a work written by “Vera Alder”. Very shortly thereafter I came across two advertisements simultaneously in the NY “Village Voice”, a paper I never read, but one, which someone had left, in my house one afternoon. Browsing through it, I came across lectures being given on Theosophy, one by the ULT, and the other by the TS. Finding this an interesting and timely coincidence I decided to go. Yet I had to choose as they were on the same day. Then I recalled a statement by Vera Alder in her book attributed to HPB, “Spiritual Knowledge can never be bought or sold”. Since the ULT meeting was free, and that of the TS had a cost, I went to the NYC ULT Lodge, and have been affiliated with it and Theosophy since that time.

Theosophy to me is Universal Brother/Sisterhood, it is equivalent to the Paradigm of all form, its Essence, Ground and Being. It is the Causal Ground and Eternal Truth of wisdom, the path to acquire it, and the practice whereby one “Consciously Becomes It”, for the benefit and service of all Life. It is the symbolic representation of that greater unspoken and unspeakable truth that can only be realized in the silence of our Eternal and Divine Natures. And it is through and according to such a realization that one begins the daily practice to awaken the “self-reflective and self-conscious” faculty within one’s Eternal nature that allows one to understand the Esoteric Implications within the words of the Theosophical Teachings. Finally Theosophy is that science which points to and eventually helps one Become that Highest Wisdom embracing all knowing, Action, Evolutionary expression, Service and Duty in or out of bodily existence.

My favorite “two” works, which complement each other, are HPB’s The Secret Doctrine, and her commentaries on the Pistis Sophia. For myself, taken together, and following her leads, references and teachings, these both illuminate each other, and demonstrate the actual objective path as it exists for humanity, subjective and objectively. It demonstrates that there is a structure and paradigm of great nature, and how one must act and live in order to become one of the helpers, if not destroyed out of wrong motive during the process. It makes clear how subjectivity becomes objectivity and one makes progress onwards and inwards to arrive at the first (of several) level of the goal, which is the self-reflective conscious appreciation of One’s “Spiritual and Eternal Ego”, which again is no personal ego. And from here it points out even higher levels to be realized and the responsibility that accompanies such realization in the service of all. Theosophy means this and yet so much more.

The biggest challenge for the Theosophical movement currently may involve overcoming the glamour associated with the products and modern day magic of technology, immediate sensual gratification, and loss of mindfulness regarding others and self. This is in fact causing many (individually, collectively and nationally) to use less and less of their human and soul based skills, and generating more and more a reliance on technological advancement. Instead of bringing us for the time closer to our true selves and in greater search of our spiritual natures, it appears to be doing the opposite. (This is not to say that such technology cannot be used for spiritual awakening for in some quarters it is being used just for that reason, but in general, how it is being used by the bulk of humanity.) Becoming enmeshed in and infatuated with technology, as we are enmeshed in and deluded by our bodies, the exercise of effort, discipline, study, cultivation of mental and moral powers, and the practices conducive to spiritual unfolding run the risk of being lost individually and globally. Having said that, it should also be appreciated that technological development can be and is in some circles being used to foster global awareness compassion communication and spiritual growth. As usual, it would be using the technological in the service of the personal as opposed to using it for the benefit, and in the service of the immortal that is the great obstacle. Just as HPB had to work against the current of the crass spiritualism of her day, trying to clarify and teach truth, so technology in its way poses a formidable challenge.

I would wish for the future of the Theosophical Movement, individuals that are selfless, who understand the global stakes, who practice and live the life, thereby knowing the teaching. Such individuals, no matter where, will be able to see behind the transitory masks of personality and lower vehicles, awaken to the utter emptiness of apparent objects in their relation to the soul, and thereby sense the great purpose of the Theosophical movement as it silently infiltrates all scientific, philosophic and spiritual disciplines to bring out their great truths related to the greater divine and global truths. Understanding that purpose and using the universal language and teachings of the original message of Theosophy and its Roots, they will succeed in bringing the humanity of the world closer together in spiritual awareness, unity and living, such that we may hasten the arrival of those great souls whose duty it is to bring in the new ages, rounds and humanities, living according to the great precepts of spiritual morality, brother and sisterhood thus contributing to the evolutionary development of the global life.

We have 1103 guests and no members online