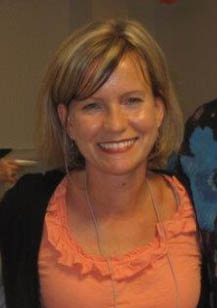 Rozi Ulics. I grew up in a little rural town called Mantua, Ohio in the USA. I’ve been a member since 2009.

Yes, I feel fortunate to belong to an active Lodge here in Washington, DC. It was chartered by Henry Steel Olcott in 1897. I’ve served as president, treasurer, webmaster and TOS liaison for the Lodge. We meet every weekend (bi-weekly in the summer) for members’ study and public program. Since we’re a small group, we each take responsibility for giving talks on theosophy. I especially like to give talks on the Founders and pioneers of the movement. They were flawed like each one of us, but they worked hard and faithfully. We can learn so much from them, even today.

Like many of us, it I found out about theosophy through “happenstance.” I was at a mid-summer wedding where someone told me in passing about an organization that had been founded in the late 1800s that was responsible for bringing occultism to the western world. It made an impression on me for some reason – I remember feeling somewhat shocked that I had never heard of it before. The only other thing I learned about the organization was that it had been founded by a woman and two men. Six months later, I just happened to attend my first TS public program here in DC. I knew immediately I was in the right place for me. Oddly, it didn’t even strike me till later that the two organizations were the same. And that the wedding had taken place on the same weekend as our annual TSA convention in the USA. So I like to think whenever we gather together as Theosophists, we send out a little signal to like-minded people so that they can find us when they are ready.

I found theosophy at a time in my life when I was somewhat lost, and it became my North Star. It points and guides, but it doesn’t direct. It gives meaning to where I’ve been so far in my life, helps explains what we are doing here and where we are all going together. So to me, theosophy is a philosophy of life. It’s practical, uplifting and so valuable, I wish everyone had access to its ideas. It would help bring so much peace to so many people who need it, like I did.

The answer to this is like the sound of one hand clapping! I like to read the classics - HPB, Judge, Olcott, Annie Besant, Leadbeater, (etc. etc. etc.). I would say recently I have been especially touched by Letters That Have Helped Me by Judge. But I also like to read the autobiographical/historical works of the early pioneers because it’s like reading about old friends.

I’ll also add that though he’s not an “official” Theosophist, Hermann Hesse’s books have made a deep impression on me – especially Journey to the East. This uncanny little book depicts the wonder, joys, dangers and pitfalls of the spiritual path. I highly recommend it to anyone who is serious about following a deep spiritual practice.

My experience is limited, but I imagine one of the biggest challenges is for us all to work together in harmony. The Society is so important. But at the same time it’s not important if our ideas of how it should be run get in the way of our ability to work together. And isn’t there enough divisiveness in this world already? We’re called to be bigger than that. Working together as brothers and sisters is very hard. But at the same time, it’s part of our spiritual practice. And anyway, in-fighting in the Society is nothing new – the Founders struggled with it from the very beginning! So there is a lesson here - let’s try to learn something positive from their example.

I would wish simply that the Movement would continue to thrive as an example of peace and harmony and optimism and share this jewel of the Ancient Wisdom tradition with all people - when they are ready to receive it.