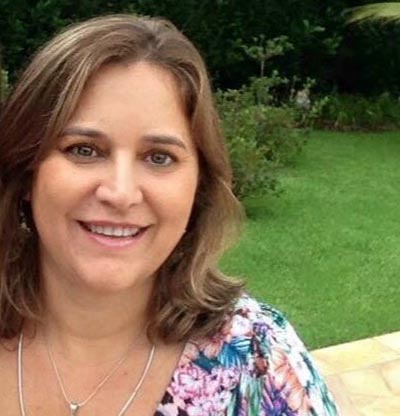 My name is Valéria Marques de Oliveira, I am from Brazil and I have been a member of the TS since August 12th, 1994.

I have been an editor of the official publication of the TS in Brazil, called Theosophia, for 9 years and I also have given lectures in some Lodges, when requested. I used to be very active, but since 2012 for some personal reasons I had to limit my contribution.

In 1993, I was especially interested in knowing more about meditation and I was encouraged by a friend to participate in a Seminar on meditation that would be taking place at the Instituto Teosófico, in Brasília. It was four days of intense study and I had the opportunity to be in touch with the Theosophists who were very active on that occasion and it was then that I had my first contact with Theosophy and the TS. After this Seminar I was still only attending lectures by different speakers for almost a year without joining it, until finally I understood that the Theosophical teachings answered all my inner questions and that the TS was a safe source for a sincere seeker.

Theosophy is a big name and which can signify Life as whole with all its plenitude. Theosophy reminds us that we are here to empty ourselves of arrogance, vanity, egocentrism and that Life is much greater when directed by the compassion, joyfulness and insights that present us with Reality as it is, giving us a direct knowledge, devoid of prejudices, judgments and illusions. Wisdom transcends the intellect and gives the possibility of flowering of true human nature. Theosophy for me represents the unveiling of Life in all its dimension, magnitudeand beauty. It reminds us of this possibility and how important self-knowledge is.

It is hard to choose a favorite, but I have three which inspire me to make a complete transformation in myself and that greatly extend my understanding of Theosophy, the Life and the whole Universe. They are: The Secret Doctrine, - Volume 1, The Voice of Silence and Light on the Path.

I believe that the challenges of the TS nowadays are not greatly different from the time of its foundation, since humanity has evolved, but much more needs to be done. We as members of the TS, still run the risk of interpreting the Theosophical teachings according to our preferences and conditioning. For this reason, I think that the biggest challenge of the TS is to spread the Theosophical teachings with impartiality, as presented in its origin, but in a language that reaches as many people as possible. As HPB wrote: ‘The principal aim of our organization, which we are laboring to make a real brotherhood, is fully expressed in the motto of The Theosophical Society and all of its official organs: “There is no religion higher than Truth.”’ Besides that, I also believe that the first objective of the Theosophical Society remains another of its great challenges. It is still important that this objective be put into practice by each of its members and that they can lead humanity to understand that we are all part of a whole, that we share the same Essence.

The term “Theosophical Movement” for me means something that is beyond the TS (as institution), and therefore covers many movements around the world that share the same goal. All these movements are of great importance to fulfill the role of sharing the Theosophical teachings and of spreading love-kindness to all beings, so that Theosophy can be a living source for the world. I hope that these different Theosophical Movements fraternize with each other and come together in a great cell of wisdom and fraternity.