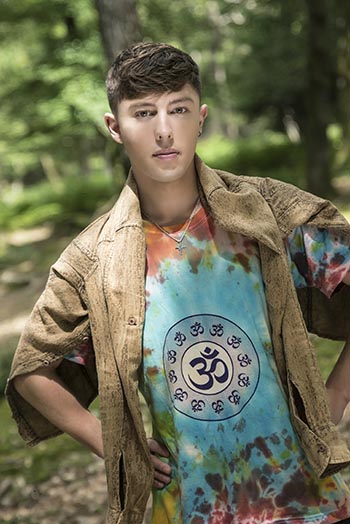 My name is Luke Michael Ironside. I was born on the island of Guernsey, just off the French coast of Normandy, although spent the majority of my childhood and life growing up in New Zealand, at the complete opposite side of the globe. I have no one particular place which I call my home, and rather regard myself as being a global citizen. This year I will be living between the United Kingdom and the Philippines.

I joined the Theosophical Society formally in 2016, although had been studying Theosophy and related subjects independently for six years prior to this. I have had a deep interest in such subjects as comparative religion, philosophy, and esotericism since a very young age and it was these interests which led me to my current involvement in the TS.

I am a member of the Worthing Lodge of the Theosophical Society and my sponsor for membership is Colin Price, the former President of the English Section. I am active in the English Section (and abroad) as a writer and lecturer on Theosophical subjects and have previously lectured at the Leeds Lodge of the TS as well as at the School of the Wisdom in Adyar, India. I recently facilitated the Youth Forum at the 141st International Convention in Adyar and am very active on social media which I believe to be a highly efficient tool for spreading Theosophical ideas to youth around the world.

I have a passion for writing (and indeed, come from a family of writers) and have previously written articles for Theosophia, the journal of the New Zealand Section of the TS; Vidya, the journal of the United Lodge of Theosophists; the Theo-Science Newsletter of the Australian Section, which is edited by Dr. Victor Gostin of the University of Adelaide; and for the associated websites of the Independent Lodge of Theosophists and the Aquarian Theosophist Magazine. Some of my articles are currently being translated into Spanish by the Bolivian Section of the Theosophical Society for distribution among the members there.

I will shortly be relocating to the Philippines for a time, where I will join the recently founded Cebu Lodge. This February I have been invited to visit the Palompon Study Group of the Theosophical Society in the Philippines to give a lecture on “Theosophy and Christian Thought”.

I first discovered Theosophy through my interest in and exploration of occult/esoteric subjects, particularly in my quest to discover the deeper meaning behind exoteric religious teachings. From my studies of various religions, I began to notice recurring similarities and common ideas running like a thread through all the great teachings of the founders of all the world's myriad religious traditions. It wasn't long before my delvings into esoteric literature brought me to Madame Blavatsky and The Secret Doctrine around the age of 16.

Theosophy is a term which defies any direct definition. We can perhaps hint at something of what Theosophy means, and yet its profundity eludes our total grasp and we can but scratch at the surface of the deeper and unutterable essence which lies far beyond the finite reach of mortal minds. My own humble attempt to provide some answer to the question would be to say that Theosophy is essentially that single stream of initiatory teachings running through all systems of religious and philosophic thought in the history of man's evolution. It is referred to by various terms by different authors, some of these being the Ageless Wisdom, the Perennial Philosophy, or the Wisdom-Religion, each attempting to describe this same universal body of ancient teachings. Theosophy, as a living Wisdom, must be seen to transcend the limitations of theoretical and intellectual speculation, and rather to provide access to a direct experience of Truth. It is not merely a philosophy, but something which may be applied and lived, with direct and demonstrable results.

I couldn't name a single favorite book. I find that different books and authors have different things to offer, each being necessary to arriving at a deeper understanding of that multi-faceted body of truths which is Theosophy. Of particular inspiration to me, however, were the works of William Walker Atkinson, a Theosophist and writer on occult subjects from Chicago who was active in the early 20th century, most famous for his anonymous authorship of the 1908 masterpiece of esoteric thought, The Kybalion. I would also include The Secret Doctrine among the works which have had the greatest influence on my own thought and outlook.

Dissension and the diminution of a common goal. Now, more than ever, we must strive to work towards the practical application of the First Object of the Theosophical Society, “to form a nucleus of the universal brotherhood of humanity, without distinction of race, creed, sex, caste, or colour”. We must be careful to avoid dogmatism and the sterilization of thought in which state only that which is familiar or comfortable is accepted as true. We must keep ever as our ideal the Motto of the Theosophical Society, that “there is no religion higher than Truth”. Unity must be our method; as Truth must be our aim.

The inclusion and involvement of youth in the Society and a reawakened emphasis on the significance of education to the future of our Movement. I would further like to see the ideal of Universal Brotherhood become a living, breathing reality; manifested in the activities and functions of society and in the fabric of our daily lives and motivations. My vision for the future is that of a collective awakening of consciousness to the Unity of all Life, and the purposeful aspiration towards the alleviation of suffering and the evolution of our race.

We have 352 guests and no members online