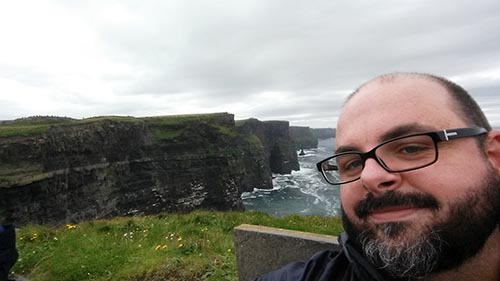 My name is Daniele Ulotti. I was born on 14th April 1981 and raised in Northern Italy in a small village between the cities of Modena and Reggio Emilia, 60km from Bologna. I have been a member of the TS since September 2012.

I am a member of the Reggio Emilia Lodge, which is actually very small with 7 to 9 people attending regularly, and , together with a fellow brother, I usually take care of meeting people who make contact with the Lodge for the first time and ask for general information. We usually meet them once or twice before they join us for one of our Lodge meetings.

On a national level I am a member of a group of younger Theosophists working on the presence of the Italian Theosophical Society on the Internet and on the definition of a policy to welcome, both in person and/or on the Internet, young people who show their first interest in the Society. At the moment we are also working on the creation of the Italian section on Theosophy Wiki.

I have also been a member of the Italian Executive Committee for some months now.

The very first time I heard the word “Theosophy” being spoken I was at a friend’s party, more or less 13/14 years ago. My friend knew I used to read books about Oriental spirituality and compared religions and he introduced me to another friend of his, named Fabrizio, by saying “he is also interested in stuff like what you read about but well, he is actually more interested in something called Theosophy”. This person has been the chairman of my Lodge since its foundation but at the time the Lodge did not exist then.

After this first episode the years went by and, approximately five years ago, one day I was having my car fixed at the local garage. I was sitting in the waiting room, reading a book. In that period I had been reading lots of books about hermits and people who had found their spiritual fulfilment thanks to contact with nature, because I was feeling particularly lonely from a spiritual point of view: while on one hand I had lots of friends and family, on the other no one seemed to share the same interest in spirituality as I did.

There was another man standing in the waiting room, reading a newspaper, who suddenly said: “I have already read all of these newspapers and I have nothing to read now!” So, almost on a whim, I asked him if he wanted to have a look at my book which was actually titled “Atman” and this triggered his desire to share some very basic notions of Theosophy which he was a student of, as he told me. He then invited me to meet (once again) Fabrizio and, after reading Theosophical books and meeting them and other members on a regular basis for more or less six months, I decided to join the Theosophical Society.

Theosophy means the reunification of sensations, emotions, thoughts and ideas I have somehow always had, which all come together in a unified, consistent system which is fundamental to the development of our spirituality, and to answer the great existential questions human beings have always asked.

Theosophy also means family, a group of people walking the same spiritual path with a similar point of view on how the search for Truth needs to be carried out, a place where protection and understanding are always granted.

If I was to choose one I would say The Secret Doctrine as this is the text which represents the great revelation or the great challenge to change oneself. I am still in the process of studying it though, and I doubt one reincarnation will be enough to really grasp its innermost meaning.

A book I almost always carry with me is The Voice of Silence for practical Theosophical exercises or meditation in any moment of the day.

I guess the biggest challenge the TS has to face at the moment is to be able to spread its teachings correctly in a world that on the one hand is eager to find answers about spiritual matters but on the other tends to look for these answers in a hasty and frantic way. In such a scenario there is sometimes more space left for misunderstanding than to a correct comprehension of the possibilities given by all the specific spiritual paths.

I know there are some concerns about the TS growing older, at least in some countries. I wish the Theosophical Movement could continue spreading its message and teachings in the clearest and most correct way possible, because I am convinced that, if this happens, we should not worry about the future of the Movement itself. Thanks to their incredible strength and power, the Theosophical teachings will always resonate within an open heart.