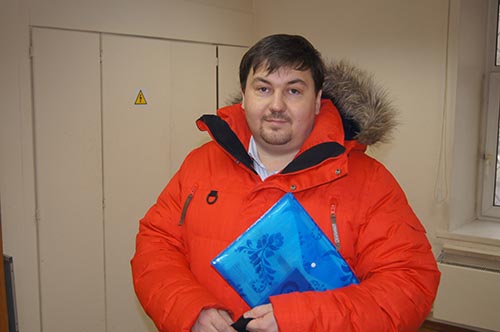 My name is Alexey Besputin. Now I’m living in Moscow. I have been attending the meetings of TS in Russia and Ukraine since 2008. I received my TS membership diploma in 2010.

At first I knew about Theosophy through the books by H. P. Blavatsky, but the real immersion into it, and the genuine interest started because of two books.Once, in winter, when waiting for the local electric train, I entered a second-hand bookshop, just to get a little warmer. I had enough time, and without any hurry I browsed through the volumes on the bookshelves till I came upon a book by Annie Besant entitled: The Riddle of Life: and how Theosophyanswers it. The emblem of the Theosophical Society proudly glared on its cover. Its design was unusual and it attracted my attention. The content absorbed me; half an hour had passed with noticing it. I embarked the train feeling already quite another man! It was the Discovery, a real mystical encounter which was predestined, the starting point of my spiritual search.

Later a book by C. W Leadbeater The Inner Lifecame to my attention, and after reading it, I understood that all the answers to all the questions of my interest are in the Theosophical teachings. The soul had made its choice; Theosophy became the music of my soul.

After the insights and discoveries from reading Theosophical literature I began to inquire if I could meet Theosophists, and soon I found like-minded people of akin spirit. Three years later with the support of the, at that time vice-president, Mahendra Singhal, we formed the lodge of the Theosophical Society in Moscow, for which we are grateful to him. There were no official lodges of TS Adyar in Russia from1917 until 2011, so we had to start the work of creation TS in Russia from scratch.

Theosophy for me was always the key to the understanding of the laws of the Universe and the realization of one’s own predestination. Sooner or later all of us are confronted with the period when questions like “Who I am, and where I’m going to?”arise in our consciousness. I am grateful to our Masters and to the good karma for this luminous Path to come into my life, the Path of Knowledge, Wisdom, Compassion and Service: the Path of Theosophy.

Theosophy was always the source of inspiration and it uplifted my soul, no matter how hard the circumstances of my life would be.Knowledge of the laws ruling the Universe and understanding the law of karma, make us active creators and vehicles for the highest cosmic principles and ideals conducting them to the physical plane.Theosophy changes me, therefore I change the World!

I have no favorite book. In each period of life, a publication comes which helps the consciousness to unfold, to rise to a new level; another step on the ladder of evolution. When a soul is seeking knowledge and it is being revealed, we, in Russia say: “The book has found its reader.”It doesn’t mean that” Someone sought for the book and finally found it, but that the book mystically comes to its reader, because he or she is now ready to attain more knowledge.”

There are three books which I reread cyclically in every two or three years:The Voice of theSilenceand The Key to Theosophy by HPB and Human Regeneration by Radha Burnier. I also enjoy to open at random any volume by W.Q. Judge and read one or two chapters from it.

It enables me to evaluate my daily life, to understand whether am I on the right track, following the ideals, to check if my perception, consciousness, mind, and spiritual heart are pure.

In my understanding the main tasks of theTShave not changed that much, since the moment of its foundation:

We have 557 guests and no members online