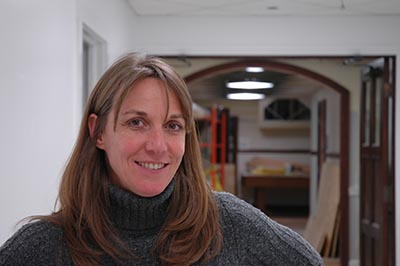 Michele Sender, I am from the Chicago area and have been a member of the TS since 2006. Soon after that, with my 3 children, I moved to the grounds of the National Headquarters of the TS in America, Wheaton, Illinois, and began volunteer work at the Front Desk. Over the next 7 years, I worked in the Information and Volunteer Department; part-time in the Library, Membership and Book Shop; and my favorite part – cooking up love from the Olcott Kitchen.

I was the first president of the newly formed Wheaton Olcott Branch, taking lead of an already well establish study group which was formed and nourished for a few years before I joined them. I enjoyed that opportunity to guide the study from a well thought out syllabus established before I arrived. The process of leading a discussion, allowed me to study at a deeper level of commitment so that I was prepared to set the backdrop for the work of the evening. We had some successful workshops and began a meditation program based on the website – Dzyan Theosophy. I am a teacher by trade, so the organizing came naturally but the process of study and how each connection I made during the study was absolutely fascinating to me. And now, since January 2016, I became part of the Ojai Valley Lodge, here in California.

I usually say that I tripped and fell into Theosophy. In 2005, I had joined the Co-Masonic group that met on the grounds of the TSA, and just slowly began to investigate Theosophy and the TS. From my point of involvement, Co-Masonry was the active part of my Theosophical work. There was a clear connection and weaving together of study, meditation and service, which I make my points of practice.

I didn’t come to Theosophy through any sort of academic background – at the time I knew very little about comparative religions, philosophy or science. My background actually was from the New Age Movement, which only took me so far and then I began to look for deeper explanations to life’s ways. When I joined the Society, I was a working mom with 3 children. As I started to study, meditate and incorporate service into life, I quickly noticed that the usual forms of this work did not fit with my busy family life and was actually creating more chaos. So, instead I began to look at things from my point of view, from my background and from my place in life at the time. My study became that of a study of relationships between higher and lower, inner and outer, spiritual and mundane. I studied how I interacted in the world, at work, in Masonry, with my children all in the light of Theosophy as a living power. Instead of a sitting meditation, my practice became what I call ‘moving mediation’ – the awareness of my actions, thoughts and feelings as they present themselves throughout the day. Then focusing on my duties as a mom – folding the clothes, doing the dishes, waiting at the school for the kids; a constant movement back and forth, in and out of awareness – this became my daily meditation. Service – I always joke, I had a choice whether to feed the homeless or feed my children – at this point in time, I just couldn’t do both – I chose my children! My service then was focused on raising them as conscious, thinking beings aware of each choice they make and the bigger picture it has on their surroundings. I guided them as best as I could, making hard choices, laying down the law and following through with what I say, even when it wasn’t easy. I, also, used the time I drove back and forth and around the school tosend blessingsto all the students. These were my little bits of service to the humanity of youth.

My favorite author would be Rohit Mehta, and the first book I read of his was Seek Out the Way. I was in the middle of a great storm in my life and the first two chapters gave me instant clarity to the situation and then both simplicity and precision to the wider perspective from which I needed to base my choices on for the years that followed. It has continued to be an inspiration to this day for all those mini-storms that necessarily pop up.

The restoration and dissemination of Theosophy, for its students, as a living power for daily life.

I wish that there be faith in the teachings and inspiration from the teachers for each one of us. That we find the strength, wisdom and courage to move forward each day in spite of what seems like constant failings or misgivings; that we see the significance and the value in trying to work together with love, in support and encouragement despite of our differences.