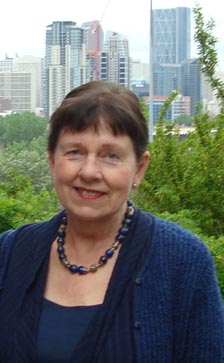 My name is Lorraine Christensen. I live in the beautiful foothills city of Calgary, Alberta, Canada – a gateway to the Rocky Mountains. For 43 years I have been a member of the TS, having joined in 1973.

From the onset, I have been an active student of Theosophy, regularly attending meetings and eagerly reading and studying Theosophical literature. By the mid-1990s I began taking on responsibilities, serving as Secretary of Lotus Lodge, as well as being a Board member of the Canadian Theosophical Association.

In 2003, I took the initiative to reactivate the Theosophical Order of Service in Canada. In 2006 by Order of Appointment, our International President, Radha Burnier, formally installed me as Director for the TOS in Canada, a post I continue to hold.

I was elected Vice President of the Canadian Theosophical Association in 2007, and by 2008 served as National President until 2009. In 2011, I was appointed as Secretary of the newly formed Veritas Study Centre and continue to remain active in that role, serving chiefly as study leader of The Secret Doctrine classes.

I was born and grew up in the Toronto area, privileged to be part of an eclectic, idealistic family – one branch strongly Catholic and the other a mixture of forward thinking Protestants, Spiritualists, and Transcendentalists. The ideals of social activism, altruism and universal citizenship were instilled in me. Some family members spoke the world language, Esperanto, carrying on correspondence with people around the world. Growing up in this spiritually enriching environment prepared the way for me to take to Theosophy, which I first discovered in 1968 while living in Vancouver. There I began borrowing Theosophical books from the Public Library. Soon afterwards, I started attending Hermes Lodge meetings in Vancouver. When I moved to Alberta, I joined Lotus Lodge in Calgary.

Theosophy allows me to breathe! It brings oxygen to my Spirit, along with freedom to explore the mysteries of life without being limited to a particular set of dogmas and creeds. I know of no other movement that provides for such a degree of freedom and universalism.

For me, Theosophy unveils the inner, timeless truths which form the basis of all religions, philosophies and sciences. It ties everything together, bringing meaning and purpose to life, revealing how intelligence, justice and compassion guide our evolution.

Theosophy as manifested through the TS during the past 140+ years evokes in me a sense of awe and gratitude when I consider how, despite being small in numbers, in virtually every field of human endeavor, so many of our members have had enormous positive influence on the world. We have produced movers and shakers at the forefront. In Canada alone, as early as the 1890s TS members were taking an active role in social reform, among them Dr. Emily Stowe, the first woman to practice medicine in Canada, her daughter Dr. Augusta Stowe Gullen, renowned as the first woman to graduate with a medical degree in my country, and Flora MacDonald Denison. They worked ceaselessly for the women’s suffrage movement, playing a major role in gaining the right for women to vote. Many other Theosophists in Canada have effectively served in various fields, but space does not allow me to mention them here.

The first book I studied in depth at Lodge meetings was First Principles of Theosophy by C. Jinarajadasa. That book holds a special place in my heart as it was a catalyst to explore further and deeper. However, my all-time favourite book is The Secret Doctrine (SD), my primary jnana yoga textbook. HPB spoke about the SD as carving new pathways in the brain. I think she was right on. By taking the approach of reflective, meditative study, new vistas are there to explore with each page we turn. The SD has an innate potency that challenges us not just to think in different ways, but to experience the Truth for ourselves, to activate the Divine Spark within.

In my opinion the TS faces several big challenges

An organization or society can get derailed. I am keenly aware that the freedoms we enjoy as Theosophists are made possible by the rules and regulations that hold the Society together. As human nature has a tendency to be unruly, it is important that we have infrastructure in place to keep us in line and accountable. Rules and regulations can be updated and streamlined, but never abandoned. They serve as the checks and balances, the bricks and mortar, the nuts and bolts holding the TS together.

I think it is important to have a strong, dynamic center from which the work can flow. For me, Adyar is that center, the focus, the hub. I support all efforts to strength our headquarters on all fronts. On the administrative side, it means that certain changes should be made to update and simplify our rules, to remove wording that is confusing and cumbersome. A stable, well run organization at headquarters can support the freedom and diversity that members need in their search for Truth.

Apathy is another concern. Sometimes passivity and lethargy can set in, maybe caused in part by taking for granted the labors and sacrifices of our leaders and key workers. Care must be taken not to coast and simply live off the spiritual capital bequeathed to us from those who came before us. We need to guard against negative reciprocity where members take, but don’t contribute.

Deeper commitment to study is important because study leads to service as night follows the day. The Masters made it clear that they want members who are willing to serve, to heal, and to help. Sincere students engaged in serious study can experience enlightened thinking and a deepening of compassion. It is up to each member to encourage and activate that sense of wonder, and pure joy of learning - especially in our young people who usually have the spark, the fervor to explore the mysteries. I am grateful for the fresh energy and idealism that many of them bring into the Society.

In future I wish to see TS outposts start up or restart in virtually all countries of the world. Also, I would like to see each country with a TS presence also having a TOS to provide an outlet for service projects.

Character assassinations of personalities living or deceased should have no place in our life as Theosophists. We should strive for a unitive spirit and not a divisive one. Thus, in future, I welcome and support all collaborative efforts by various Theosophical groups to work together in a spirit of brotherhood. It is encouraging to see that efforts are being made to do just that as through various international conferences taking place in many locations, and through initiatives like FOTA (The Friends of the Theosophical Archives) serving to safeguard our past by preserving Theosophical archives around the world and Theosophy Forward looking to the future to present Theosophy in fresh and positive ways.

I think the future rests with the members. Wherever we are planted, each of us can keep the link unbroken by serving as a steward/custodian to pass on the message of Theosophy.

We have 55 guests and no members online