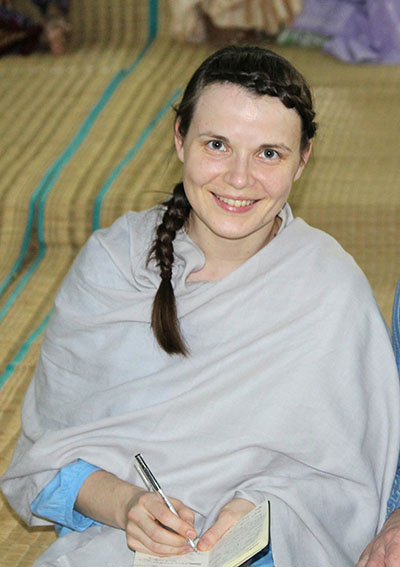 I was active in Estonia up to 2014, after which I moved to Paris, France. In Estonia, I was working as the librarian of the lodge, I was interpreting, translating, editing and doing various other tasks that were necessary. Since moving to France, I am working as a volunteer at the Headquarters of the French Section and at the Editions Adyar that publishes Theosophical literature in the French language and Le Lotus Bleu magazine. In 2013, I was appointed as the Secretary of the European Federation of the Theosophical Society.

I was 17 years old when I learned about the Theosophical Society and its activities over the internet in one forum. I had already been interested in religion, philosophy etc. for some years, so when I went to listen a public lecture by a senior Theosophist, I felt that it was a kind of universal approach to all what I had read, and most of all, that it expressed in words what I had felt inside.

Coming into contact with Theosophy and the TS gave truly meaning to my life. When I began to participate in the programmes, I felt as if I had found a treasure. I feel that I have had a great opportunity, because it is not evident that one has the good fortune to study true spirituality. To be born in our time in a place, where followers of the spiritual path are free to practice without being persecuted and without having to travel to the other side of the world to find a true source of spirituality, is something that is rather exceptional if one observes the history of human kind. Most obstacles on the path seem to be nowadays internal. So if one is interested in spirituality but fails to use the opportunity that our time offers, it is in a way as if a life has been wasted.

I can’t really say that I have a favourite Theosophical book, yet there are some books which inspire more than others. I guess that there are also different times for different books.

Yet, one of the books to which I come back regularly and which really nourishes spiritually is The Voice of the Silence. It is not only the unconditional and lofty ideal that is entwined into the book, but also the beautiful and poetical way of expression that goes to the depth of one’s being and touches one’s heart.

It seems that the biggest challenge the TS and I believe many spiritual organisations are facing nowadays is lack of dedication on the part of people. As dedication comes from appreciation, gratitude and valuing, it seems to become more and more rare. Nowadays, one sometimes has the feeling that everything can be bought. Or not even bought but downloaded or ordered (almost if not) freely from the Internet. This availability is a good thing, because whoever is interested in spirituality or Theosophy can’t say that there is not enough information. Yet, there seems to exist a kind of devaluing in the sense that as everything is easily available, it has turned out to be something much cheaper than it used to be.

One can just take and keep whatever and when one wants. It is more difficult to have a fundamental feeling of gratitude and a natural wish to give something back or rather forward. So one takes from here and there, does not wish to dedicate oneself to anything with the excuse of wanting to remain “free.” At the same time one does not often realize that if there had not been before him or her people who had dedicated themselves to the TS and Theosophy, one would not have the organization, literature, possibilities etc. to benefit from.

So it seems that dedication is the greatest challenge, because when there is no dedication, sense of responsibility, there can’t be any true knowledge, neither true transformation, nor continuation.

I would wish that the Theosophical Movement would not lose in sight of the Ancient Wisdom while being at the same time dynamic. Wisdom does not need to be reinvented, it is always here, fresh as ever. Yet, its expression in each epoch of time should correspond to the state of the human mind. It does not mean becoming superficial or changing to gratify latest trends, but following the great wave of life and moving timely with it.