Pearls of Joy is the title of a small booklet dedicated to the memory of Joy Mills, a great Theosophist, teacher and human being. Those who were fortunate enough to know her, work with her or study under her guidance will agree that words cannot describe this compassionate, wonderful and unforgettable Theosophical giant. 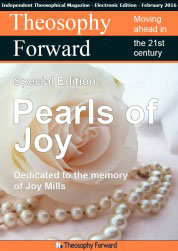 Here follows the adjusted version of the E-book, Part Two, made suitable for Theosophy Forward the magazine. 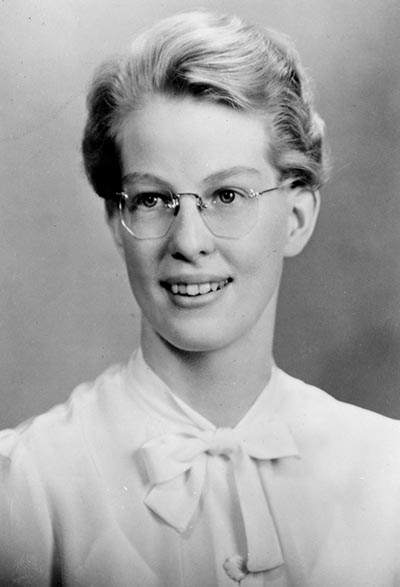 Joy as a promising young woman during the war years; 1943

Question 8: What advice would you give to a new student of Theosophy?

Answer 8:  “advice...to a new student of Theosophy”: Study the original literature of the Society, so that you may learn what are the key principles of the theosophical philosophy, and, above all, see how those great truths apply to your life, so that living Theosophy you may become an example for others who may be seeking to know the meaning and purpose of existence.

Question 9: How did you first find Theosophy?

Answer 9: In early 1938, I was a freshman in college (then called Milwaukee State Teachers College; it is now the University of Wisconsin-Milwaukee). However, I was in a second year German class, a rather small class; one of the other students (who was actually a sophomore) with whom I struck up a friendship turned out to have just joined the TS. Our friendship really began over a mutual interest in poetry and philosophy, as we discovered, and in sharing that interest it soon came out that she was studying Theosophy. She invited me to a meeting of the Milwaukee Lodge (the whole incident is too long a story, but in brief it was supposed to be a dramatic production of the Rubaiyat of Omar Khayyam--which turned out to be something of a fiasco); then the college library had a number of books by Annie Besant, so I began reading those. At the time I was living with my mother (my father having died just a few months before), and when I mentioned my new interest, she was quite opposed, but that too is another story.  Anyway, I continued reading and studying the books on theosophy available in the college library and began attending some of the public meetings of the Milwaukee Lodge. The first major speaker that I heard was Mary K. Neff, an American who had just returned from several years of residence and work at Adyar.  (Actually we became very good friends and some years later, on her death here in Ojai, she left me her notebooks which - together with her library - are in the library and archives at Olcott.) So, although I did not actually join the Society until 1940, I had been studying Theosophy for about two years before joining, attending Lodge meetings and actively participating in a very active Young Theosophists group in Milwaukee.

Question 10: Your name, “Joy,” certainly lends itself well to the life you have lived and the work you have done. Is there a story behind how your parents chose that name?

Answer 10: You ask about my name; the story behind my name is quite a simple one.  Joy was a family surname, Irish, and then my mother was named “Mary Joy,” but always called “Mary.”  I was given her name, so my full name is “Mary Joy,” and early on was called by the full name.

Soon, however, it was condensed to just “Joy.” 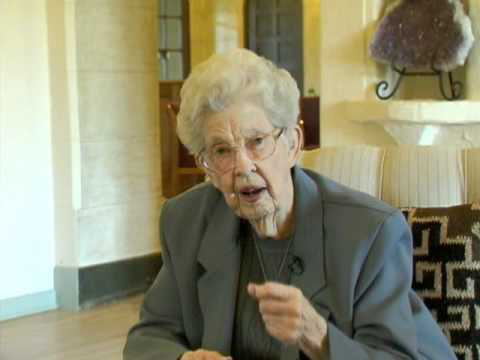 Perhaps it is not so much that wisdom has to be awakened, but that we have to come awake to ourselves, to the wisdom that is present because we become one with it. So the process is a kind of clearing of the field so that we can come awake. There is no longer the mist, the obscuration, the clouds.

From: From Inner to Outer Transformation, page 22

Question 11: Many people comment that, despite your advancing years, your mind is open, and your thinking remains fresh and agile. What's the secret to keeping one's mind open so our thoughts will not become too rigidly fixed?

Answer 11: It is essential, I think, to keep an open mind on all subjects, and I have always encouraged people to inquire, probe deeply, into whatever subject is of interest to them. For myself, I have sought to learn more in the various areas that mean most to me. Keep the mind active and fresh, in so far as one can. Of course this does not mean that one permits the mind to wander off in all directions! I do have some firm convictions, but I enjoy listening to the views of others, questioning other points of view to determine what they may add to or differ from my own perception of things. I read as widely as possible, and perhaps that has helped me in keeping an 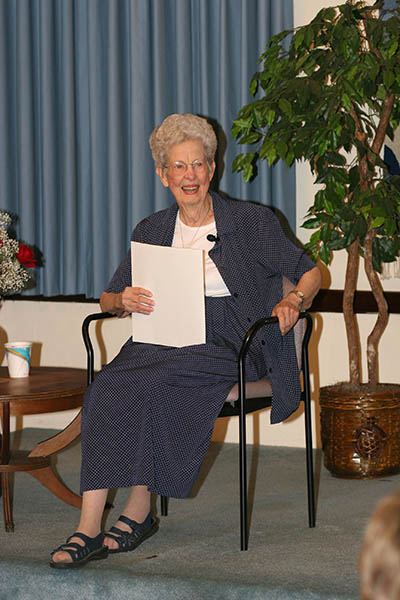 Where she felt at home most: on a small stage in front of students passing on that what she had learned (here at Olcott in Wheaton)

Question 12: What do you think is the best way to introduce people to theosophy when you first meet them? Where do you start?

Answer 12: How to introduce people to Theosophy? Much depends on the individual to whom I am speaking. If someone, whom I do not know, asks me about Theosophy, I first try to find out what their interest may be.  For example, if it is just curiosity, then my response is very general. If the interest is from the point of view of some personal problem, my response may be to point up how Theosophy or theosophical ideas have helped me in my personal life. If the individual is particularly interested in, let us say reincarnation, then I respond with some statement on that subject. Or if the person is a scientist, then I try to point up the logic of Theosophical concepts. Of course, when I have given classes on basic Theosophy I usually have used one of our basic, introductory texts, trying always to make the concepts as practical for daily life as possible.

Question 13: Is there a particular type of meditation that you recommend to beginning students?

Answer 13: Meditation for beginners: I recommend simple breathing exercises, mindful breathing as emphasized by Thich Nhat Hanh and the Buddhist tradition. Then I may also recommend that one take a “seed thought,” a sentence or idea from some spiritual text, and give attention to it, concentrate on it (to learn concentration), holding the mind as steady as possible. Again much depends on the individual to whom I am speaking. I have given classes on meditation, using a variety of methods, suggesting that each participant try out the various methods to find the one that seems most helpful to them personally.

For every birth, a death is required and the great arc of life, even in a single incarnation, contains many rebirth moments if we are willing to face and to endure the countless deaths the little self must experience if it would become transformed into the vehicle of the One Self.

From: From Inner to Outer Transformation, page 92 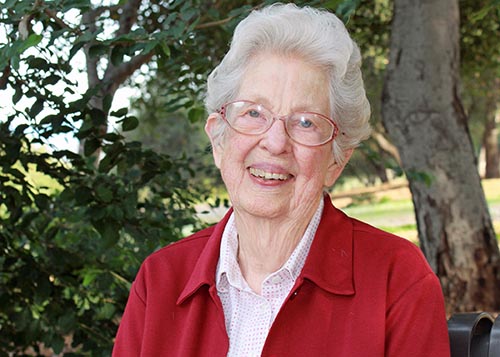 Question 14: It’s often said that traveling the world broadens one's viewpoint, and you've certainly traveled extensively and met people from many different cultures. As you've encountered cultural diversity around the world, how has this affected your view of the Theosophical teaching that humanity is a brotherhood?

Answer 14: Indeed traveling the world does broaden (and deepen) one's perspective on life, and I have been richly privileged to have visited so many countries on nearly every continent (except Antartica!). Frequently, of course, I have been entertained in the homes of members in the various countries, and so have had an opportunity to experience the culture of the country in a very direct and intimate manner. All of my experiences in travel, meeting peoples of different cultures, ethnic backgrounds, different religions, has made me ever more aware of the importance of brotherhood, the need for all humanity to understand each other, to act in a spirit of understanding, of brotherhood. We need to be open to understanding the views of others. The ideal of brotherhood, true brotherhood, is central to Theosophical work, I think.

We must learn to speak the language of our humanity, of our humanness, so that we can speak to each other, not about things, about technical achievements, technological advances but in the truly human language of the heart. Such speech, of course is not alone of words; it is a language of one's intimate being given expression in the total communication of ourselves to others.

From: One True Adventure, page60