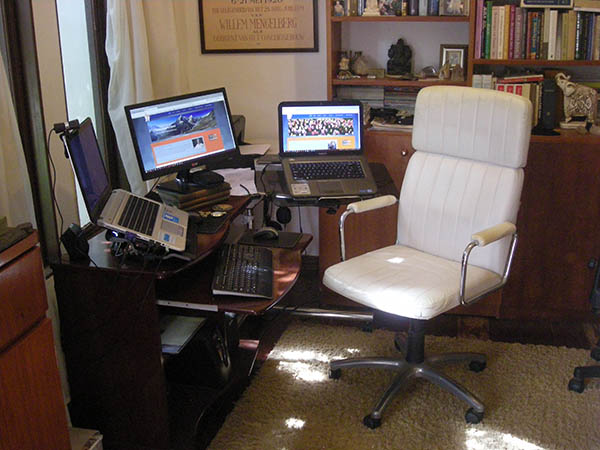 The Theosophical Society-Adyar is most definitely “on the move”, just as Theosophy Forward (TF) is. This E-magazine is seven years on the road now, doing its work serving, and time has gone by so very quickly. I often mentioned in talks and in my writings that TF’s conception in 2009 was wholly caused by pain and a deep frustration directly after the tumultuous 2008 election for International President of the TS-Adyar. Time had come to show the world that there is much more to Theosophy than skirmishes between members inside one of its vehicles, or some silly characters throwing mud around on internet forums. This magazine has always tried to transmit optimism and clarity while it has also offered a platform where all members, affiliates or students from the various Theosophical vehicles meet, by supporting the essential work of International Theosophy Conferences Inc. (ITC)

The TS-Adyar is on the move and that is evident. The Adyar-Renovation project has come off the ground and is progressing very well. Under the passionate supervision of Michiel Haas, whom I have labelled as the first renofant ever, advancements have been made; the much needed donations are coming in and the first “Elephants Newsletter” was widely distributed, keeping all informed into detail regarding developments, finances and the position of the Fundraising Thermometer. But it is not only the Adyar-Renovation project that shows that the TS-Adyar is moving ahead in the 21st century at a considerable speed. International president Tim Boyd is travelling and lecturing intensively, reaching out to members in Central- and South America, Australia, Europe and India. His outreach also involved young members during the International Youth Gathering held last February on the grounds of the Theosophical Institute near Brasilia, which turned out to be a great event that certainly will be repeated in 2017.

As stated earlier, International Theosophy Conference Inc, (ITC) is an initiative, fully supported by Theosophy Forward. This year’s conference in Santa Barbara – California, from August 11 – 14, will certainly be as energetic and inspiring as the previous ones. It was suggested by participants during last year’s meeting in The Hague, the Netherlands, that rather than having a program filled with lectures, this time the focus should be on studying together. It’ll be made possible for those who come to Santa Barbara to sign up in advance for a specific study circle, indicating what topic has their main interest.

Those who participate in ITC 2016 will be supplied with Theosophical readings and study material made available on ITC’s website beforehand. With what was reintroduced by H. P. B., they will determine, by offering practical guidelines and solutions, why it is crucial that the world knows that Theosophy exists, and has always been there to help humanity. In our Good News category you’ll find more information about this event. To summarize: ITC 2016 is certainly not going to be just an intellectual study, the emphasis will be on finding ways how one can “live”, thus become Theosophy. In a paper distributed by the TS-Point Loma entitled The seven Jewels of Wisdom, we’ll find the following apt statement:

” Theosophy is much more than a scientific theory; it penetrates every fiber of your consciousness, of your thoughts, your feelings, your actions. Once you have pondered over the vital questions of life in the light of Theosophy and experienced the truth of it, there is no going back to ignorance. In this fact lies the explanation for the overwhelming feelings that many people experience when they are introduced to Theosophy. For Theosophy is not merely a logical scientific system, not just a philosophy, and not another religion, but it is the synthesis of all three.”

During the last held annual International Convention in Adyar both Eugene Jennings (a ULT student) and Herman C. Vermeulen (Leader TS-Point Loma), respectively President and Vice-President of International Theosophy Conference Inc., were invited to deliver talks, and were part of a questions and answers panel at the closing of the Convention. Their presence in Adyar was a historical occasion and a number of hard-working Theosophists at Adyar and elsewhere ought to be applauded for making this happen. In this issue of Theosophy Forward, in the Good News category you’ll find two articles in which Eugene and Herman share their Adyar-experience.

Your editor was flabbergasted when he visited the site of the Blavatsky Lodge, based in London. Let’s agree that in the land of Theosophists, all and all, good things are happening left and right, but sometimes truly wonderful occurrences draw our attention. Last year, the at that time Lodge President Linda Seale and Erica Georgiades from Greece got together and discussed the possibility of creating a new website for the Blavatsky Lodge. Erica very professionally designed it and the result is without a doubt outstanding. The Blavatsky Lodge was founded in May 1887 by Madame Blavatsky herself in Norwood, Greater London. The Lodge is part of the Theosophical Society-Adyar, India with its headquarters in Chennai, following its three objects. In 1934 the Lodge moved, with the English Section of the Theosophical Society, to 50 Gloucester Place in the centre of London, where it still holds study meetings and organizes public lectures. Under the influence of Madame Blavatsky the Lodge produced one of the most influential magazines of the early Theosophical Society, Lucifer. Do yourself a favor and visit the site, add it to your favorites and take some time to go over it. I must congratulate Erica and the folks in London, it’s another step forward, so thanks for all your hard work and efforts. Click here

In this issue, in the category Theosophy, a tribute to, and four articles written by Shirley Nicholson, Ralph Hannon reviews some new and old books in Notable Books; the mini-interviews are there in the category The Society, and in the category Theosophy and the Society in the Public Eye you’ll find a write up about an exhibition in Chicago concerning the works of Annie Besant, while a number of major articles are translated into Spanish, Portuguese and Italian; they are to be found under the dropdown menu entitled Other Languages. Obviously there is much more, have a look on our homepage and click on the category of your choice.

When you see an article of your interest, you can share it per email with friends or print the text and use the content during Lodge meetings. There are simple instructions on the homepage, which tell you how to do this. Like always I must thanks the team of dedicated volunteers, spread out all over the world, that makes it possible for Theosophy Forward to do its work; the magazine is clearly a joint effort.

We have 912 guests and no members online