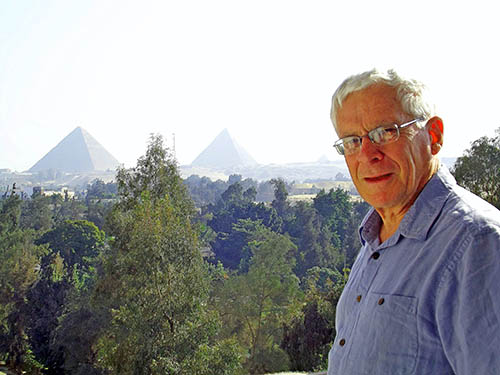 My name is Warwick Keys, I live in New Zealand and I have been a Theosophist for 21 years, although I was teaching Theosophical understandings long before I joined the Society.

I have always been interested in the spiritual journey of humanity and read and taught on related subjects. I came across The Secret Doctrine in 1992 and started researching and reading about Theosophy. I joined the Society by ‘accident.’ I wanted to read one or two books which I knew would be available from the TS library in Auckland (New Zealand). I thought I had to be a member to borrow from the library, so I joined the Society. I then discovered that I did not have to be a member to access the library, but it was too late, I had joined!

Theosophy has provided me with the core understandings of the Ancient Wisdom which I had been seeking. I took to Theosophy like a duck to water. It has been central to my life since I joined. This does not mean that I blindly accept everything, but it does mean that Theosophy often lights the way for me. I have also come to realize that HPB had a natural bias to the East and the Vedantic teachings. I have now discovered that there is a strong Western esoteric tradition, which originates from Ancient Egypt. I have been exploring this for four or five years now and the interrelationship between the East and the West traditions. This has included a three week visit to Egypt which was completely life changing for me. I had three ‘initiatory’ experiences there, quite unexpectedly.

No particular favorite. Most of the ‘classic’ books resonate strongly with me. At The Feet of The Master and The Key to Theosophy are high on the list and ‘Isis Unveiled’ has been a great resource book for me.

The biggest challenge is ‘modernizing’ TS. It is the 21st century now and TS needs to quickly adapt to the new ways of communicating in particular. HPB said that the Society’s role was to popularize the Ancient Wisdom teachings. The Society is slow in taking full advantage of doing this using all the tools now available, particularly for the younger generation – Facebook, YouTube, new approaches to ‘study courses’ etc. Theosophy New Zealand is addressing these challenges and developing new interactive on line study courses.

Rising to the challenges of the 21 century. As well as the issue of modern communication methods TS needs to streamline the organization structure. The present organization structure was ideal 100 years ago, but now can only be classified as antique and even perhaps fossilized. Theosophy New Zealand is in the process of restructuring its organization, but the International organization is seriously lagging behind. Unless a modern constitution is adopted and the administration system is completely overhauled then the Society will wither and die. The symptoms of such a decline are increasingly apparent when viewed objectively. The present dated and very conservative structure is totally out of place in the 21st century and is off-putting to new comers, particularly the young. The Theosophical Society has a powerful message for all people but it often stutters in the delivery.