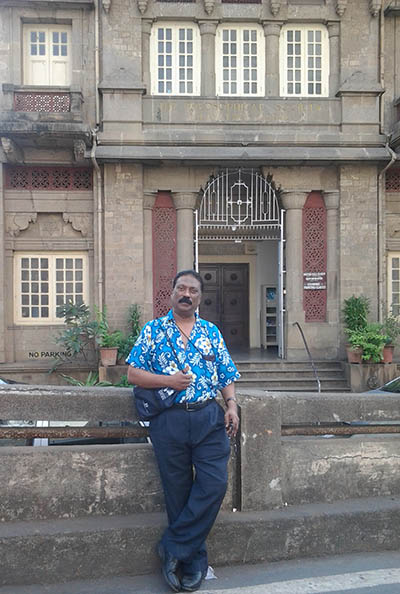 My name is Arni Narendran and I am from Mumbai. I joined the TS in 1976 at Chennai, after participating at the centenary convention, I was immediately assigned the task of a Manager at the International Youth Centre at the Adyar HQ which was established by the then President Bro John Coates along with the project initiator Bro Nathaniel Altman, a writer on Ahimsa, Vegetarianism, and Power Spots, who now lives in New York.

On relocating to Mumbai I became attached to the Blavatsky Lodge, very close to “Crow’s Nest” where our founders set base on their arrival in India. I am an active member of the Lodge which is a dynamic Lodge with around 150 members with around 50 of them very active. I am one among the core volunteers and the last project which I participated in was to catalogue books for a large library in our premises. I also participate as a speaker in study classes on Theosophical subjects as well as deliver talks on special occasions. Our Lodge President Bro Navin Kumar endeavors to bring out the best in every member not only through lectures but through music, dance and other expressions, thereby building togetherness among members.

Although an Adyar resident from Besant Nagar on the Elliots Beach , which is on the contours of our HQ, it was not until the age of twenty two that I got exposed to Theosophy. A chance meeting with my spiritual mentor and my lifelong friend, Bro Peter Glasson, (now lives in Brisbane) connected me to Theosophy and the Society. I entered the doors of Theosophy through The Mahatma Letters which book was mindboggling and a revelation. I subsequently became a protégé of Bro John Coates who inspired many a youth across the world to Theosophy. He worked through his Heart Chakra more than anything else and that had impact. The International Youth Centre was his brainchild.

For me Theosophy is a body of Knowledge and Wisdom which shows the path to higher consciousness, where by the practitioner of Theosophy, regardless of being a member of the society, becomes aware of the very purpose of Life. I also realize that unless this Wisdom is translated into our lives, by bringing in positive “Attitudes and Action”, we would remain in the dark. It is this awareness that has made me an active “Giver” in return for what I have “Received” so far. I am presently engaged in a skill facilitation project for under privileged youth as part of my’ “Giving” to my Brethren.

The Mahatma Letters by A. P. Sinnett was an eye opener of a book to me, The Secret Doctrine, Old DiaryLeaves and Personal Memoires of HPB by Mary K. Neff are some of the books that have inspired me.

The biggest challenge is the “Visibility” of the Society. We have an extraordinary infrastructure in many countries and cities across the world which our Founders and past members have left for us, we must cash in on these resources and build upon our legacy. Theosophy is becoming increasingly relevant as a panacea for the current problems of the world. We cannot afford to be overlooked in the landscape.

I am very optimistic for the future of the Theosophical Society as Theosophy has become relevant to humanity, more than ever before in history. The way forward, I see the Society play a catalyst role in bringing a transformation to the “Universal Thought Process” – from a “divisive” world view to an “inclusive” world view of Universal Brotherhood. Our present leadership as well as members are evidently working towards this goal.

Opinions expressed are of those who are being interviewed. They don’t necessarily represent the ideas and opinions of the compilers of Theosophy Forward. The responses of the interviewees are not edited for content. Some contributors give short answers to the questions while others touch upon the subject more elaborately.

We have 834 guests and no members online