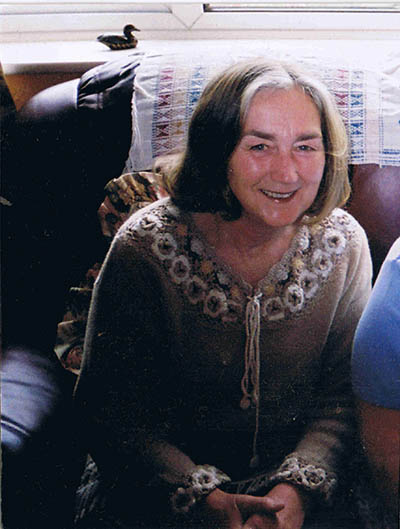 Vicki Jerome, from – aha, now there’s a tricky question! I’m living in a rural area of Canterbury, near Christchurch, New Zealand, but like to say I’m from Wellington, my favourite city in NZ where I lived for 22 years and joined the TS at the start of 1978… but before that, lived in USA for 5 years (New York, then New Jersey) after 4 years at university in London, England… but originally (yes, I’m getting there!) from Nottingham, England (Robin Hood and all that!) – but wait, there’s more! Was born and spent the first 8 months of my life in Wales, UK. (No wonder I’m an intrepid traveller!)

At Section level I was NVP for 3 years from 2010 to 2012, now I’m just proof-reader for our national TS magazine, TheoSophia and coordinate the child sponsorships our members donate through the TOS in Mumbai and Karachi. At Lodge level, currently just on the committee of our small newly formed Canterbury Branch, but was Treasurer for Wellington Lodge for about 7 years until I left that city, and later Secretary of the Christchurch Branch for a few years in the late 1990s. At the Regional level, I’m Secretary of the Indo-Pacific Federation of the TS.

Actually, I first saw a poster for a TS talk on a noticeboard in the corridor of my girls’ school in England. I remember wondering what “The Theosophical Society” was all about, but amazingly for me, I never asked anyone! (Normally, I was one of those “Why? Why? Why?” kids.) Obviously, I wasn’t deemed ready just yet!

Then, in 1977 I was going through a period of intense searching… for the meaning of life, “why are we here?” and so on. I was amicably separated from my ex-husband, who didn’t share my curiosity, and had become involved in a number of leisure activities, one of which was to join Mensa, as I enjoyed mental challenges. One evening late in the year I was hosting one of their meetings, which members took turns to host at their homes, and a member, a fellow-scientist, arrived early. I invited her to sit in the lounge while I finished putting out the cups, tea and coffee in the kitchen for supper. When I went back into the lounge, my friend turned around and stared at me wide-eyed. (“What’s up?” I thought.) She said excitedly, “You and I need to talk!” She was sitting next to my bookshelves, and had been looking at the books – all about things like the occult, Alistair Crowley, parapsychology, Near-Death Experiences, Nostradamus... I explained about my lifelong search for the Truth, upon which she proceeded to tell me about the TS. I was thrilled, and after a then-impending three-month business trip to Malaysia and India (first time there), I joined Wellington Lodge as soon as it reopened in the New Year of 1978.

The Three Objects express it perfectly, really. To me, Theosophy is all about a group of like-minded people joining together in their search for the Truth. Different philosophies and/or religions might be right for different people in this incarnation, it’s not necessarily “one solution fits all,” so we should support each other in our individual searches. I’m passionate about this being “without distinction on grounds of race, creed, sex, caste or colour.”

I have to confess that I have not yet read many of the well-known and significant books that I should have, such as the Secret Doctrine (due to lack of time, certainly not lack of interest!), but I do have a few favourites read in my early TS days – it would be hard to choose between At the Feet of the Master, Light on the Path and Geoffrey Hodson’s The Call to the Heights: Guidance on the Path to Self-Realisation – the latter was probably the most helpful and inspiring to me when I read it many years ago.

This would be to get the Society out there and better known to the general population, amid the constant competition from the overwhelming number of related or fringe groups vying for attention, particularly on the internet. So much of the new and interesting information the TS offered in my early days is now in common parlance, if not necessarily fully understood – such as reincarnation and karma – we can offer more in-depth information on these subjects and others, so I believe we need to focus on a specific section of the population, those who are of a mindset to absorb and act on the information – these would be, in my opinion, young adults whose interests lie more in the intellectual rather than, perhaps, the physical (e.g. sport, etc.) areas – university students, new graduates and similar. Perhaps we should publicise the famous scientists who were members – although at the forefront of science now, there seems to be much more acceptance of Theosophical ideas and teachings than there was a few decades ago.

I wish for it to grow and flourish as more and more people worldwide realise that there is more to life than power, wealth or possessions, and that we are all one people, all one Being in fact, and should join together to support each other in our search for the Truth, the meaning of life, and what we are meant to be doing in this incarnation.

We have 305 guests and no members online