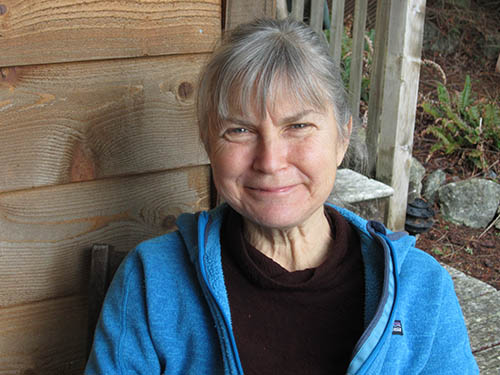 My name is Leonie Van Gelder. I was born in Vancouver, Canada, lived in Sydney, Australia for some years growing up, and have lived in the US since 1971. Currently I live with my husband, Minor Lile on Orcas Island in Washington State, not far from Seattle. I have been a TS member for 42 years.

Minor and I share in the management of a Theosophical camp/center called Indralaya on Orcas Island off the north coast of Washington State in the US. We oversee and coordinate all areas of operation at Indralaya. From year to year, we have about 1000 people participating in our programs.

I have held various positions in groups, lodges and the NW Federation through the years. Currently I am secretary of our local study center that meets here at Indralaya. In the late 1970’s I worked at the US National Headquarters in Wheaton IL during the presidency of Dora Kunz.

I grew up in a family with several generations of Theosophical roots on my father’s side and Theosophy was an integral part of my upbringing, and my worldview. Discussion was always important in my family. We were taught to question, and not to accept things at face value. The Theosophical motto, “There is no religion higher than truth” was very important, as well as the idea that we all have to find our own path.

It wasn’t until I was 20 years old that I decided to become a member of the Society. Before that, I didn’t really think that membership in the Society had anything much to do with being a Theosophist. (I still believe that). I became a member for several reasons, one of them being to support the Society and its goals.

For me, Theosophy is about the “unity of all life” and what it means to grapple with that Reality. It is about aliveness, the idea that everything is made of the same stuff—a tree—a star—a snail—and me. It is about recognizing the sacred in all things. It is about a search for understanding. It is about compassion and service.

The Mahatma Letters to A. P. Sinnett was a favorite of my father, and I was much inspired and influenced by it and continue to be. I also resonate with The Voice of the Silence. It highlights the spiritual path so well and it is so beautiful. Dora Kunz’s The Personal Aura is a book I pick up often, as it speaks to self-transformation clearly, practically and in modern terminology.