Pearls of Joy – Part One

Pearls of Joy is the title of this small booklet dedicated to the memory of Joy Mills, a great Theosophist, teacher and human being. Those who were fortunate enough to know her, work with her or study under her guidance will agree that words cannot describe this compassionate, wonderful and unforgettable Theosophical giant. 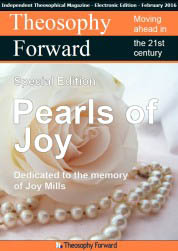 Here follows the adjusted version of the E-book, made suitable for Theosophy Forward the magazine.

Question 1: You’ve given your entire life to serving others through The Theosophical Society. Have you had any regrets about the life you chose?

Answer 1: None whatsoever! It has been a rich and privileged life, for I've always felt it a privilege to work for the Society, and the opportunities afforded me have been enormous.  Not that it has always been easy, of course, for there have been many times when the work was difficult, when doubts assailed, when the journey was a lonely one. But always, too, there have been wonderful times, deepening friendships, inspiring associations, treasured relationships.  So, as I reflect on all the years, I realize that I would not change any of the experiences, and I've learned so much even out of the darkest times!

Question 2: You first arrived at The Theosophical Society in America in 1940; what was the atmosphere in the TS at that time, as the world braced itself for war?

Answer 2: My first visit to Olcott was in the fall of 1938 or the spring of 1939, not certain which.  I had just begun reading and studying some of Annie Besant's books that were in the college library, and in our Young Theosophists group, we had studied HPB's The Key toTheosophy and also Jinarajadasa's First Principles of Theosophy. As it happened, my speech professor at college was a member of the TS, and in late 1938 or early 1939, she drove a group of us down to Olcott (from Milwaukee) for a public lecture. As I say above, I didn't actually join the TS until summer 1940, but for some two years I had been attending meetings, studying, and had even visited Olcott.

What was the atmosphere? Well, of course, the war had broken out (in late 1939), although the U.S. did not join until after that fateful day, December 7, 1941, when Pearl Harbor was bombed. However, the atmosphere in the Society at that time was one of a commitment to the cause of the allies. We were very much aware that the Society's leaders - George Arundale was International President; Sydney Cook was National President - were behind the war effort. Dr. Arundale, who was such a dynamic person, enthusiastic over young people in the Society, giving them so much support, was writing editorials and even publishing a small newsletter in addition to being editor of The Theosophist, was calling on the young Theosophists particularly to realize that we could help by being “invisible helpers” at night (when asleep), helping those being killed in the war to awaken on the other side. Of course, it was my generation that comprised the ones involved in the first war-time draft in this country, and with Dr. Arundale's “call to arms” almost, it was a rather heady time in the TS. We were all involved in one way or another.

Dr. Arundale, by the way, was always announcing some “campaign” or other: there was a “Campaign for Brotherhood” for one, I remember, but there were others also. And as Young Theosophists, we all dreamed - and even planned - to get to Adyar one day! Well, the one who introduced me to Theosophy - Caroline Tess who became Caroline Ross - did get there and spent a couple of years at Adyar; I too made it, and that is another story.

We eagerly embrace the Theosophical philosophy in an effort to free ourselves from past conditioning, for our studies open new vistas that promise true freedom of thought. 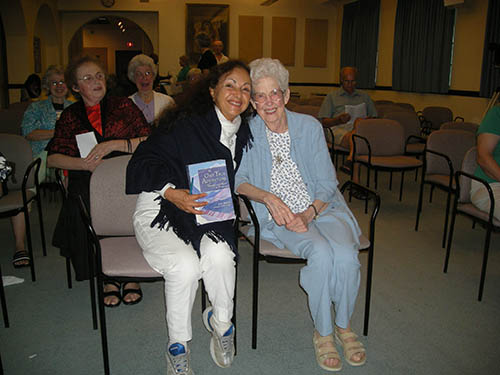 Historical photo: Terezinha Kind and Joy at Olcott in Wheaton, in the background, the third row, Adele Algeo

Question 3: You’ve studied and taught Theosophy your whole life; what is your favorite Theosophical teaching?

Answer 3: My favorite teaching? The nature of the human being; human potential, the unfolding of consciousness; the life to be lived. Live the life, if you would come to the wisdom, said HPB.  So how does one live the life? The importance of dharma, fulfilling one's responsibility in helping others. 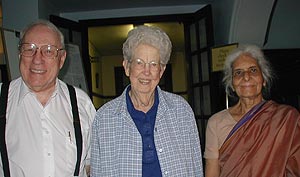 Question 4: You have lectured in over 60 countries. At times, it must have taken a lot of courage; have there been any situations in which you felt endangered?

Answer 4: You ask if there were any situations in which I felt “endangered.” Not really, although there were some occasions in my travels when I felt uncomfortable as a white woman traveling alone. Perhaps the most uncomfortable situation was in West Africa, particularly on the occasion of my visit to Lagos in Nigeria, alone in a hotel, and again in a hotel in Monrovia, Liberia. Members visited me, of course, and in Monrovia the small group of members came each evening, crowding into my hotel room and full of questions! It was quite an experience, one I shall never forget. However, during the day (I had to stay there four days, as I had missed the scheduled flight from Monrovia to Buenos Aires and as there were only two flights a week, I had to wait for four days for the next flight) I was on my own. As the food at the hotel was not much to my liking, I would go out to explore if there were any restaurants in the area that might offer a better menu. I am sure there were some inquisitive glances as to why a lone white woman would be wandering about!

A true generosity of spirit, combined with right or harmonious conduct, calls for a patience that never expects anything, that is content to wait on the right moment that never fears new situation s.

From: From Inner to Outer Transformation, page 88 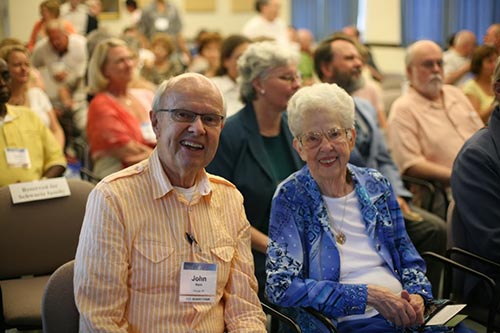 Question 5: Of all the Theosophical writers and teachers, who has inspired you the most?

Answer 5: Who inspired me the most? Well, first it was Mary K. Neff, with her stories of life at Adyar, her enthusiasm for The Mahatma Letters (she did one of the early chronologies, which while quite inaccurate in some respects still was most useful, and Virginia Hanson whose further research produced the chronology used now did find Neff's version very helpful), her stories about what she had discovered in the archives at Adyar; she certainly whetted my appetite for Theosophical history as well as study!

Then, very much and most important in my theosophical life, was Clara Codd, who came to the States (and to Olcott) in 1946, soon after the war ended; she had spent the war years in South Africa. We became fast friends, and Clara it was who said, “Joy, you must give your life to the Society!” She inspired me to work for the Society, a truly beautiful person who spoke from the heart. Her enthusiasm for the Masters was so profound and deep! Well, there were many others; later, after I came to know him, Sri Ram, of course, and also Krishnaji [Jiddu Krishnamurti], who certainly broadened my view of Theosophy, expanded my consciousness.

Question 6: What is your fondest wish for The Theosophical Society in the future?

Answer 6:  My “fondest wish for the Theosophical Society in the future”: I suppose I would say that I trust the Society will never lose sight of its roots in the Wisdom-tradition and never falter in its direction and purpose as so magnificently defined by its founders, Blavatsky and Olcott, and by those Great Ones, the Masters of Wisdom, to whom they gave full allegiance. While the expression of the Wisdom may change with the times, the essential message should remain the same, I would hope, so that those seeking a deeper meaning to life, seeking to understand themselves and the world about them, may discover that Wisdom. 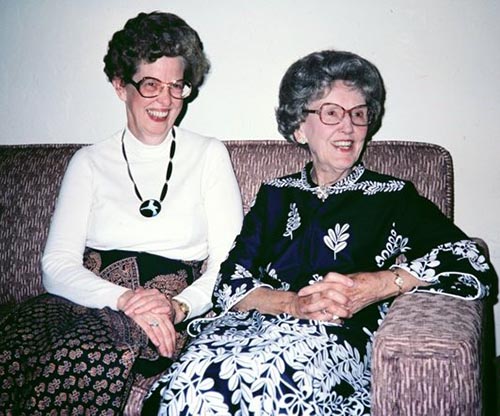 Answer 7:  “...the role of the Society now and in the future”: To continue the work so nobly begun by our Founders and carried forward by every successive generation, to make known the great truths of an ageless wisdom, to work for the ideal of universal brotherhood of all humanity, to aid suffering humanity by pointing to the causes, not simply the symptoms, of humanity's problems.

Only when wrong and distorted views concerning the world and ourselves are abolished, are we able to give attention to the reality that underlies all the phenomenal maze of existence.

From: One True Adventure, page 200 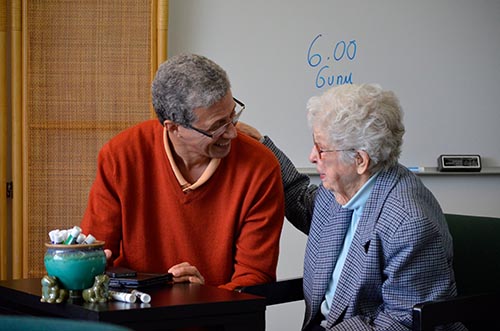 Tim Boyd and Joy in 2013 at a Krotona meeting

We have 373 guests and no members online