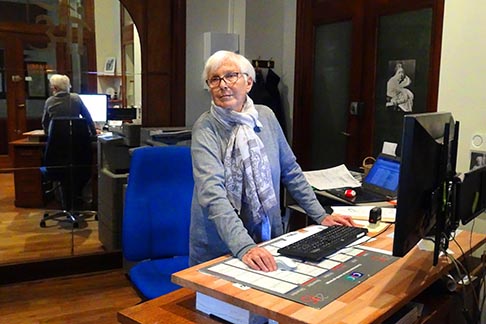 My name is Nano (Jeannine) Leguay. I am French, born in Orléans where I had my first contacts with the TS (Adyar) in Branch Jeanne d’Arc in the late fifties. The branch was very active and my sister Danielle Audoin was much involved in the activities. I was 18 years old, then. Later, I myself became also involved in the Theosophical activities.

In fact, I served as Lodge President during several years and I was recently elected General Secretary of the French Section. In addition, I have been in charge of the French publishing house (Editions Adyar) for some twenty years.

Through my sister Danielle Audoin.

My favourite book is At the Feet of the Master, which I have read and reread many times; I would also add TheVoice of the Silence for its depth which seems to be without limits.

The danger for the Theosophical Society is to be lost among all the other present day movements which claim (or don’t claim) to be inspired by H.P.B. and who owe their success to an opportunistic simplification, meaning a minimum of psychology, minimum of Buddhism, minimum of effort, minimum of Theosophy, everything well gratifying without having to put much effort.

Theosophy should be kept as transmitted by H.P.B and by eminent Theosophists who after her continued the life of the movement without compromises, despite its difficulties both as to theoretical understanding and its putting into practice. The first indication of the impact of the Theosophical movement in the world cannot be measured by the number of its members but by the sense of responsibility of each of them.