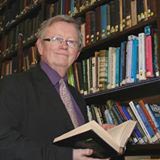 We have regular annual weekend conferences on Theosophical History- I’m an associate editor of the quarterly of that name which James Santucci edits from the States. We are hoping the next TH conference will be 2016. Because Madame Blavatsky spent the very productive last years of her life in England, there’s a lot of historical research to do here. We are also setting up a local part of the Friends of Theosophical Archives, which we call FOTA England. This is chaired by Kevin Tingay, who will shortly celebrate 50 years in the T.S.

I was brought up in Chorley, a Lancashire mill town, where 4 centuries ago Miles Standish [one of the Pilgrim Fathers] used to go to church. To Chorley Public Library had been discreetly added books by Madame Blavatsky - which I borrowed and did not understand! After I graduated I became librarian of what is now called the College of Psychic Studies in London. Its first president, Stainton Moses was a friend of the T.S. founders and featured critically in the Mahatma Letters. I felt needed to know more. I was also active in the Society for Psychical Research and was aware of their negative Report on HPB. That was another puzzle. So I went to the London TS headquarters in 50 Gloucester Place.

It means divine wisdom. Different Theosophists adhere to varying traditions, and mine is the Christian. Though I am rather critical of much that has passed for Christian Theosophy, I respect those who have wrestled with the material, such as William Kingsland and G.R. Mead. I’m also aware that there is a powerful rejection of traditional theism in the original literature, of which scholars such as E.L. Gardner and David Reigle have reminded us.

HPB’s Key to Theosophyis the best Theosophical book I know, because it is clear and well-organised. One of the central questions is whether the analysis of mediumship and survival given there – based of course on the principles which make up a human being – stands up to the latest findings in parapsychology.

To recommit to there being “No Religion Higher than Truth”. Madame Blavatsky was famously outspoken, but all organisations as they age, have matters they feel obliged to hide. The various Theosophical bodies, for example, have archives they are not publishing with material going as far back as 1875!

And alongside this is the shoring up of past reputations and theories, instead of allowing them to find their own level in the light of all the latest facts.

Theosophists were pioneers in racial equality and in mutual respect among religions. Over time, the various Theosophical bodies fell into the usual pitfalls that beset human movements for change. I would wish for a candid reassessment of what has been achieved, and what has not, before deciding on how to move forward.