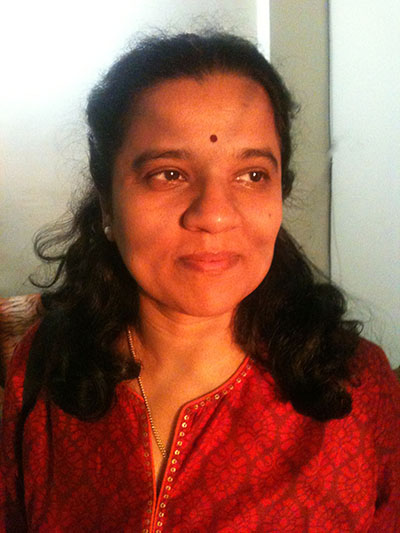 I am Priya from Adyar. I joined the TS in 1977. I was part of a group of many youngsters actively involved in the activities of the Vasanta Youth Lodge (VYL).

During the early 1980s, I became an office bearer of VYL for a couple of years. I had given talks in the Youth Convention. We conducted many Youth Camps in the Besant Scout Camping Centre, Adyar. During those times we adopted a no arm chair philosophy. Of course we also took on formidable themes like the “Role of Religion in Life” as a theme for a Symposium and had eminent persons from various religions presenting their view points. This was our own way of looking at the Second Object of the TS.

In the 1990s I transferred my membership to Adyar Lodge.

I was working full time in the corporate world for more than twenty years. It did not give me much time to devote for Lodge activities during that period. However, I have always been contributing to Adyar in whatever way I could. I have given talks in the Lodge, spoken in the International Convention, edited Convention talks.

From 2011 to 2013, I was the Enquiry Officer for the December conventions. For the last convention, I donned the hat of Convention Officer. I am also the Treasurer of the Madras Theosophical Federation

My association with TS started when I attended the Ananta Lodge Nursery School, Trivandrum (Thiruvananthapuram), Kerala as a child. My father was an active member of the Lodge and he co-founded the school of which I became the first student.

In the Lodge there were many pictures of TS leaders. So in my formative years I can remember to have been greatly fascinated by HPB’s picture. I used to imitate her posture (her chin on her right palm with the fingers for support) in family photo sessions for many years. That was the beginning.

To me it represents a way of Life pointing inward and beyond the senses. Theoretically I understand that there is the One Divine Consciousness permeating everything in the Universe. It is more about living and experiencing it that about talking about it.

As we grow the meaning we attribute to various words also changes with understanding. I cannot name just one book. I have grown up on a diet of Theosophical books, at one point in time, You by GS Arundale completely seized me and I sat reading it cover to cover as a youth. But then somewhere you realize that you need to get beyond the reflecting and pondering, and experience the wisdom behind great works. So there were bouts of hibernation when I would just stop reading.

Of late I have been getting back often to TheMahatma Letters to A P Sinnett, arranged and edited by

Vicente Hao Chin Jr,. Col Olcott’s Old Diary Leaves gives the context to understand this great movement. HPB’s The Voice of Silence is a challenge to live by even as I keep returning to it time and again.

There were many who took a plunge and dived deep into the Theosophical movement in the early days. To loudly proclaim even the very first object of TS in the world of 19th century was itself a great challenge to every serious member. It was radical. Members took pride in being a part of TS. In today’s context reaching out to people is not difficult. But to be an inspiration to others is the challenge that members of the TS face.

I have observed during the conventions in the past years, the majority of the delegates were elderly members. Many of them have been with the TS for many decades and their enthusiasm to be at Adyar for the annual convention considering it is a pilgrimage is striking.

In the same vein, absence of youth as a force cannot go unnoticed. Youth look up to mentors. They also bring in the much needed energy. So there is this huge challenge of being able to influence the youth of today.

1875 to 2015 is a long way. Madame Blavatsky and Col. Olcott began their journey with no clue as to the way ahead excepting the one Big Vision. They were guided by the Masters. There are many unsung heroes and stalwarts, past and present, whose quiet work and exemplary lives paved the way for the Theosophical movement here at Adyar and all over the world. If we can attempt and live the life that Theosophy beckons us to, the future will take care of itself. That is a huge task. Yet as long as each one of us, who are serious about Theosophy, is alive to the depth and expanse of that horizon, there is the certainty that things will fall in place in the higher scheme of things.