Impressions of ITC 2019 at Olcott in Wheaton 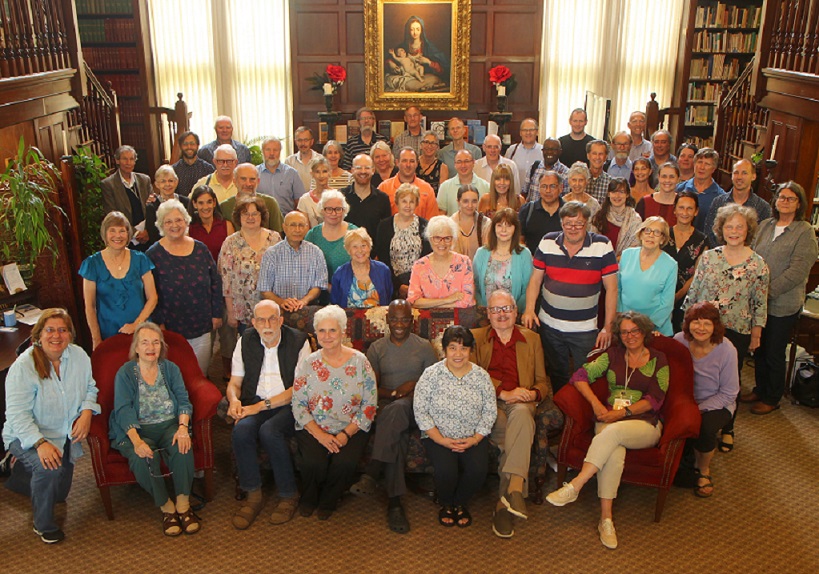 In the final summing up session of the ITC Event this summer at Wheaton—Ann, a woman with a wonderful Texas accent, said she, “was impressed that people can express ideas intelligently without hubris, in a heartfelt way, with a thread of justice for all humanity—all willing to sacrifice in order to bring the vision of HPB into being—and that no one here will rest until that vision is accomplished.” I think she summarized the totality of the conference and what the living, Integral Wisdom of Theosophy is.

Our theme this summer was “Theosophia, the Integral Wisdom—Returning to the Source of Religion, Philosophy and Science.” It was a very subtle theme, as difficult to discern as the melodious wanderings of the Flute of Krishna. But like the Pied Piper, our fearless president, Gene Jennings, somehow got us all (about 70 of us) to follow him into the sometimes Socratic, sometimes Wilburian, and sometimes purely buddhic realms of Integral Religion, Philosophy and Science. Critical clues unlocking this mystery, as explained by our Vice President, Herman Vermeulen, would firstly entail affirming what are the fundamental aspects of true religion, philosophy and science; secondly, to discover these as living truths in our lives and finally to imagine what our society would be like if their ideal potentialities could be released.

A living truth is something you comprehend, feel and embody. It is a tone. For this reason, Barbara Hebert’s initial welcoming of ITC participants to the Olcott center, as well as the keynote talks—at the beginning of the conference and at the start of each study session—were vital. Barbara Ebert, who effortlessly exudes both the sweetness of the American South and brilliance you would expect of a president of the American Section of the Theosophical Society, explained that ITC builds a bridge of hope that all the traditions can coexist, work and learn together side by side. Strong and wondrous was her analogy of the Theosophical Movement as a beautiful oak tree: its anchoring roots—its teachings and its founders; its trunk and intricate system of circulation—its core teachings; and its multitudinous branches—its limitless growth in many, yet balancing directions.

Elton Hall’s keynote address deftly illumined our theme of the Integral Wisdom with scholarly brilliance and sagacious philosophical thought. Using the illustration of the dots comprising the Paintings of Pointillism, he spoke of the precision, clarity and, most importantly—critical distance—needed to fathom Integral Theosophy. Beholding the paintings too closely, the viewer is lost in the dots—too far away, the overall image is lost. Achieving perfect, critical distance, not too close and not too far away, the living, integral picture emerges into clear relief. H.P. Blavatsky’s, The Secret Doctrine, whether read sequentially or by theme, is a form of jnana yoga, slowly making the brain porous to deeper realities. Beginning with first principles it both develops and deploys spiritual perception. Given that each conference participant is an expression of the One Life within his or her own karmic circumstance—the challenge of the conference would be: can we represent an expression of the bodhisattva path by learning to express the ideas to one another in simple, non-technical and helpful language?

The first of the three days explored Integral Religion; the second, Integral Philosophy; and the third, Integral Science. The whole effort was to get to the roots of what integral thinking itself, really is. The three talks given at the beginning of each session were each tightly packed and no doubt, when transcribed and published, will become important documents for future study. True to the theme of exploring what is integral theosophy and what is the essence of true integration, our minds became compassionate and our hearts, intelligent.

We learned in Gene Jennings’ opening talk on Integral Religion that it awakens understanding and embraces the boundlessness of life. It is unity in diversity expressed as the feeling of universal brotherhood. During the study circle sessions, we interacted with heart and mind, wrestling with and exploring what true religion really is. In the session in the afternoon wherein Barend Voorham was asked to synthesize our findings, we learned that true religion is a dynamic sifting of the true from the false, the real from the unreal. It is discipline, love, responsibility, silence, listening and reverence for all living beings.

Carolyn Dorrance cheerfully graced the stage on the second morning, helping us to understand, as H.P.B. makes plain, that true, Integral Philosophy is the wisdom of love, rather than the love of wisdom. The importance of this lies in knowing that there is such thing as a divine reservoir of wisdom from which we can tap—that is if we rise in consciousness to the level of spiritual archetypes and universal truths. In the Three Fundamental Propositions of The Secret Doctrine, we are given a foundation to make deductions and to engage in an inner dialogue. The Upanishadic/Platonic methods of asking questions and learning to think things through were upheld as aids to discovering true, Integral Philosophy within ourselves.

After a day of truly philosophizing with one another, with a surprising stamina for such things (only matched perhaps in the Banquets depicted by Plato), Elena Dovalsantos, with humor and joy, helped us to summarize our day’s efforts. We shared phrases that we had developed like “Transcendental light of Atmic Illumination” and “paradigm shift and critical distance to see the whole.” Try this one on for size: “developing a supra-personal caring, caring enough to fearlessly ask questions in a dialectical search of Unity and Truth.” Wonderment was regarded as all-important, that is, the process of searching, not worrying too much about finalities. Kindness and the absence of ill feeling were upheld as the highest goal of true philosophy.

On day three, we dove deep into Integral Science. Herman Vermeulen gave the introductory talk, giving many examples of how true science involves an honest integration with Integral Religion and Philosophy. The talk was replete with full analysis of the shortcomings of contemporary science with respect to dealing with boundlessness rather than closed systems; periodicity rather than beginnings and endings, and free will rather than pure chance. His explanation of monads and how they are an expression of the One in the Many and how all of life is integrated through the principle of resonance, was most helpful, I thought.

Pablo Sender summarized the synopsis of the day’s grapplings with Integral Science, that evening. His two talks he gave at Olcott for the TSA Summer National Convention, the week prior to the ITC Conference, had found in me an instant fan. I have always had the best luck in understanding passages in The Secret Doctrine after priming myself with a rigorous article in a science magazine or even after reviewing a chapter in a good textbook on biology, chemistry or physics. Somehow these efforts served to prep my brain, perhaps making it porous for metaphysics. That is what I could see in Pablo. His background in molecular biology coupled with his able understanding of religion and philosophy make him an invaluable communicator of the ancient wisdom religion in our modern times. His insights, cultivated via his fruitful journey through the Mahatma Letters and the writings of H.P. Blavatsky, sparkle through all of his efforts to share theosophy.

Scattered in and amongst the conference proceedings, were special events. Nancy Secrest, the international coordinator of the Theosophical Order of Service, gave us a thorough initiation into world of the TOS and the 35 counties in which it is active. We learned that Katherine Tingley and Annie Besant had a lot in common along the lines of social service and of Besant’s resonance with the phrase of the Mahatmas that “Theosophy must be made practical.” Fascinating to me was learning of the Golden Link College in the Philippines and the several other educational efforts along similar lines.

One evening Lalibel Mohaupt read aloud an extraordinary letter from the women of the Blavatsky Family History Museum in the Ukraine. The letter told of the creation of a Blavatsky study center there as well as a host of activities aimed at connecting the spiritual aspects of Ukraine and the teachings of HPB with the rest of the world. Herman Vermeulen showed video footage of the Center there in Ukraine demonstrating the invaluable resource that has been preserved by the fearless workers at the center.

It was a privilege to hear from Jon Knebel of his continuing project to publish the personal letters of H.P. Blavatsky. He told of John Algeo’s work completing Volume One of these Letters. Interestingly, Jon told us about how he himself got recruited to complete the project of the just-now completed Volume Two and the continuation of the work of starting Volume Three. Jon exemplifies so much of the very spirit of the Theosophical Movement. Theosophical work is not accomplished by people who think they are so immanently qualified. What really happens is that people, seeing no one else willing to do something that needs to be done, step up and say “I’ll do it.”

Speaking of “I’ll do it,” that is the name of a poem I wrote about my late father, James Colbert, the man who Jan Nicolaas Kind calls the “Nestor” of the ITC. And speaking of the man affectionately known as Jim Colbert, he and his wife, Sally Colbert, were honored in an open microphone session one evening. I highly recommend for people to view that session on the ITC website. One of the subthemes of the conference throughout was the spin-off ramifications of the ITC in terms of inter-theosophical cross-pollination. Always pointing out that the ideal and the promise of the ITC is bigger than any organization, my father and Sally would have been very happy in Wheaton, I think. An interesting statistic regarding this year’s conference was that 12 of the attendees were from the United Lodge of Theosophists; 12 attendees were from The Theosophical Society Point Loma—and 44 of this year’s attendees were from The Theosophical Society Adyar!

I can only hope that many, many TSA members will sign up to participate in the membership of the ITC: we need you!