This year’s Budha Purnima celebrations which falls in the holy month of Vaisakh was celebrated with great veneration and participation of both members and non members of the Blavatsky lodge. The programme started with Universal Prayer in the Green Room of the Blavatsky Lodge which has echoed the wisdom of Theosophy for over ninety years. The evening started with Lighting of Lamps by the Lodge President Sr. Kashmira Khambatta and Vice President Bro Navin Kumar.Sr.Jasmine Cawasji recited the Buddhist Prayer and this was followed by a talk by Brother Arni Narendran on the “Esoteric significance of Buddha Purnima” A fervent appeal to develop a quality of ‘Compassion’, a fundamental trait in Buddhism was made by the speaker.

The talk was followed with a PowerPoint presentation by Sr.Kashmira Khambatta on the Wesak ceremony at Shambala, graphically presenting the Ascending of the Buddha on the holy day of Wesak.’The greatest Blessings’ from the Mahamangal Sutta translated in English by professor Rhys David was read out by participants to make the programme inclusive. The meeting concluded with a session of Meditation For World Peace, conducted by Brother Arni Narendran. The gathering disbursed partaking the Holy water Blessed by the Buddha and walked away into the Silence of a moon lit night.

The Mumbai edition of Tamil language newspaper Dhina Thanthi is featuring a serial on Theosophy in its Monday ‘Religon and spirituality’ section. The newspaper with over two million circulation with its multi-city editions across India, and its transnational edition in Colombo and Dubai, is bound to draw   interest in Theosophy to a larger audience. Probably for the first time such a serial is appearing in mainstream newspaper. The article penned by N.Ganeshan is titled Occult forces on the Spiritual journey.

Here is a brief extract from this week’s article:

“As I sat with HPB well into the night, she focused on her writing the manuscript for Isis Unveiled as if possessed , she churned out page after page and gradually fell into slumber on her chair. She was looking into the distant horizon when she was writing as though copying something from the skies. I retired to my room and retuned in the morning to still find her asleep, on the floor lay forty pages of neatly written material, this happened to be the fourteenth chapter in the book . Months after the book’s release HPB declared that I felt as though I was a channel for Isis herself, while writing the book.” 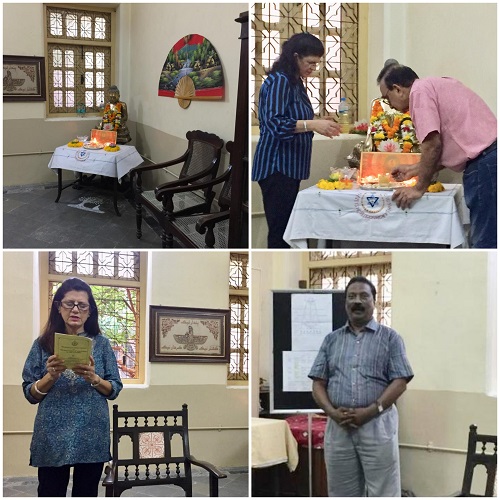