While Theosophists from all over the world were gathered on the banks of the Adyar River in Chennai for the 143rd International convention, probably the longest continuing and sustained spiritual conference in the world, Theosophists from Mumbai gathered at the Blavatsky Lodge by the French Bridge, in proximity to the Arabian Sea. Extending between 1st to 5th of January 2019, the “ MUMBAI SUPPORT CONVENTION” was organized, convened by the Blavatsky Lodge and Bombay Theosophical Federation, a tradition echoing the spirit of Adyar and for those metropolitan busy bees who are unable to travel to Chennai for whatsoever the reason. 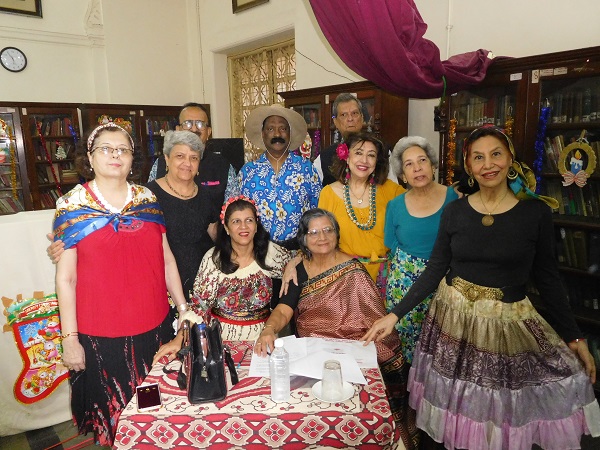 At one point of history there used to be an entourage of Mumbai and Gujarat Theosophists numbering as much as fifty attending the Adyar convention by railroad with a spirit of camaraderie and fun, they were all housed in the Blavatsky Bungalow, which is now in the limelight with its new innovated and refurbished Avatar-by the visionary insight of President Tim Boyd and Mr. Michiel Haas, an award winning Architect from Holland, on a journey that took as much as 24 hours. Ironically with as many as ten flights to Chennai from Mumbai, every day and the travel time cut to one hour and fifty minutes, the numbers have trickled down to a few. It was with this in mind the support convention concept was born and remains popular in our calendar of activities at the Blavatsky Lodge.

January 1st began with our Lodge President Sr. Kashmira Khambatta welcoming the gathering followed by broadcast of the brief talk this year of our President Bro Tim Boyd, this was extended with the key note address of Bro Tim Boyd at the Singapore World Congress. An excellent talk on the pathway to one’s spiritual journey; 2nd January was a ceremony by the Order of the Mystic star. It was on 4th January that the cultural evening with in house talent regaled the large number of audience for two hours in the evening. The Lodge has been bestowed with two key piano stalwarts, Sr. Freny Pagdiwala and Sr. Daulat Dhalla. We also have Sr. Zeena Rustum a ballet teacher who choreographed the Line Dance song with the Blavatsky Lodge Dance ensemble and rolled out the song ‘ Havana’ by Camilia Cabello. There was also the group choir, duets by Bro Bertie and Sr. Ketu, solo songs by Sr. Navaz, Bro Roy a regular participant of the church-choir and Sr. Kerman. Our lodge Vice President, Bro Navin Kumar, proved versatile with his mouth organ rendition, and magic show, Sr. Aban Amroliwala, spoke on the Indian Bhakti poetess Mira Bhai know for her devotion to Krishna. The Chowdhury couple performed mellifluous rendering of a Ghazal, a North-Indian music tradition The evening rounded up with the Spanish song Feliz Navidad to loud cheers and applause. The evening was compered by Sr. Aban Patel who kept the audience delighted. On 5th January the mood turned sublime with a talk by Bro Navin Kumar where he played video clips on mantras from various traditions and talked on its significance. Sr. Mahazaver Dalal, secretary of the Bombay Theosophical Federation thanked all for the enthusiastic participants.

The Support convention well echoed the Theosophical Mantra of Universal Brotherhood through Music Dance and Bonhomie, sending a message of Love and Joy to Theosophists all over the world.