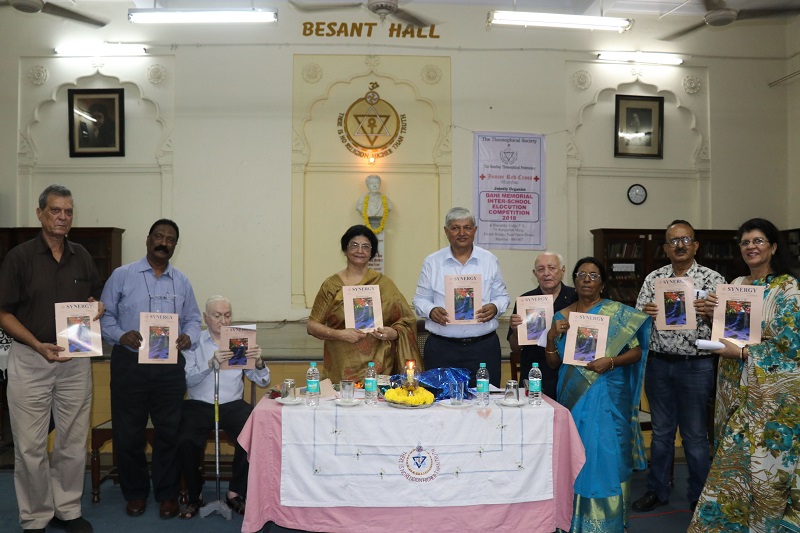 The 87th Annual Session of the Bombay Theosophical Federation was held between 26th to 28th of October. The first two days at the Blavatsky Lodge, French Bridge venue and the last day at the Juhu Theosophical Colony by the Sea.

Dr. Deepa Padhi , International Vice President was the Chief Guest. She is also the President of TOS, Bhubaneshwar. Her keynote speech was on ‘Self Transformation through Wisdom, Compassion and Contemplation”, Sr. Parinaz Gandhi introduced the speaker. Dr. Padhi also released the latest issue of Synergy journal , edited by Hindi Scholar and Gandhian Dr. Rajam Pillai. The journal featured an article on “Theosophy and Art.”

Rotarian Godrej Dotiwala, distributed the Prizes to winning students of the Dani Memorial Competition which is an initiative to propagate Theosophy among students. Bombay Scottish school stole the honors. Dr. Ajay Hora-Trustee, Sr. Mahazaver Dalal, Chief Organizer and Bro Vinayak Pandya, President BTF were on the dais. Sis Kashmira Khambatta President of the Blavatsky lodge welcomed the large gathering and the Vote of Thanks was delivered by Vice President Bro Navin Kumar.

Four Theosophists from the city of Mumbai were honored by the Bombay Theosophical Federation for having served Theosophy and the Society for over forty years viz Sr. Manjula Kanabar, Sr. Zarine Edekar, Sr Farida Lallan and Bro Arni Narendran, Treasurer of the Blavatsky Lodge. They were issued a memento along with certificates. Bro Arni Narendran, in his talk, dedicated the memento to Bro Peter Glasson from Brisbane, Australia and works as an author and music composer, who had introduced him to Theosophy at the age of twenty-two at Adyar.

On receiving the transcript of the talk Brother Peter Glasson reverted from Australia:

“Kind as always, I am undeserving of it. It is you who deserve the congratulations, for your unstinting work for Theosophy in Mumbai and elsewhere. I add my own congratulations. I feel honored by your friendship and efforts …

… A point of history, we are all old enough to be of History. I went to India at the request of Bro. John Coats to start a magazine. The sad Truth was it could not take off. ‘Tried ‘and as Masters say ‘Once work and effort is never lost’…

… Thank you once again old friend, to the next Dawn …”

Brother Peter wrote this on return home from a two week treatment in Hospital for influenza. We pray for his wellbeing.