Lara Sell from New Zealand, is an 18-year-old university student, who is passionate about animal rights, human rights and particularly women’s rights. She has been a member of the Theosophical Society since she was ten and asked to join. Recently, Lara saved up for a trip to the Philippines where she spent three weeks as a volunteer in the Theosophy-based Golden Link College.

Her report gives a refreshing look at Theosophy in action.

Flying halfway across the world alone is a feeling I will never forget. The mix of nerves and excitement over the unknown was a huge part of the 16-hour journey from Auckland to Manila that consisted of airports, layovers and people-watching. Flying into the Philippines was breathtaking. The country consists of over 7,000 islands. Those I saw on our descent were mountainous and beautiful.

Stepping out of the air-conditioned airport was a shock to the system with the heat and humidity packing a decent punch to the face at 31 degrees in the early evening. Metro Manila consists of four districts so having arrived in Manila City, I needed to travel to the northern district city of Caloocan where Golden Link College (GLC) is situated. This drive was my first glimpse of the Philippines and of Asia. My first observation was the lack of order in the streets. Cars, bicycles, tricycles, motorbikes, buses, jeepneys (the country’s national public transport – a cross between a jeep and a minibus) and people were all weaving to the sounds of horns and shouts. People walked up the busy streets in flip flops, sold items in the middle of the hectic traffic and also sat or slept on the side of the road. This initial glimpse was vastly different from any other experience I have ever had, having lived in Auckland my whole life.

Driving away from Manila City and into Quezon City, I noticed that it became less commercialised with an increasing lack of store chains, billboards and tall buildings the further away we drove. It was eye-opening seeing people sitting in gutters near piles of rubbish, grilling food on the side of the road. Some children came up to the window as we stopped at a petrol station and begged for money. This exchange occurred in Tagalog (one of the main languages spoken in the Philippines) but it came as a shock to see small children begging in what seemed to me like a big, dangerous city. As we headed into Caloocan city a lack of streetlights made me uneasy, with my first glimpse of this area consisting of shadows and silhouettes. I could make out the shape of homes very different from ours, with a variety of new smells and sounds also contributing to a sense of unease. It took four hours to get from the airport in Manila City to Caloocan City where I was staying, just up the road from Golden Link College. 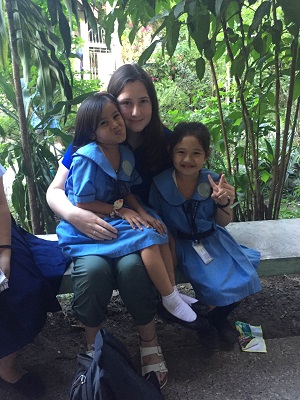 My first day at Golden Link was unlike anything I have experienced. Walking down the road alone I was a little nervous but all feelings of anxiety left as soon as I stepped through the gate. There was a class of pre-schoolers lined up and when they saw me they came flocking over, and many little hands waved through the air as I shook one after the other. This heart-warming welcome was a true testament to the loving nature of GLC. I was soon to learn that the school has the most amazing culture and atmosphere. I was taken around the school and introduced to most of the classes. I was met with a chorus of “Hello visitor, we are inspired to meet you” from rooms filled with beautiful smiling faces. I then attended some college classes covering topics such as Theosophy, values and teaching methods.

I particularly enjoyed the college circle time which is an hour every Tuesday for College students to socialise in English doing different kinds of activities and speeches. I ended up singing in front of the whole circle on my second day at GLC, but considering I had already ventured outside my comfort zone I had nothing to lose! 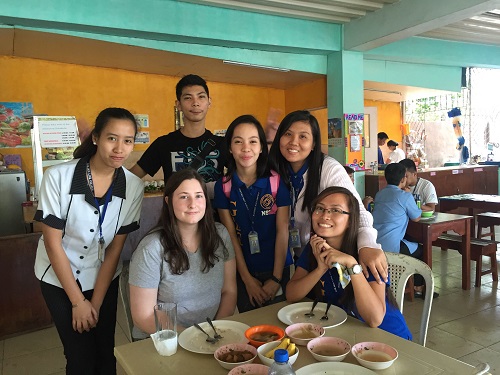 The school runs from pre-school through to university level, so there were always plenty of friendly students to talk to. The hand shaking custom along with everyone’s wonderful smiles and attitudes made me feel welcome instantly. Both the staff and students all interacted in a fun and loving manner, everybody creating this amazing inclusive culture. Any time that I was walking around the school I was met with huge smiles and friendly students, this loving atmosphere is what makes GLC what it is today. Basketball was another fun activity. However, because I was not used to the heat, a simple game felt like the Olympics! The way in which the students played was amazing. Everybody helped one another to have a turn with the ball or a chance to shoot a goal in an amusing and exciting game. The players on a team who could shoot the ball without fail from almost anywhere would get the ball right up close to the hoop and then pass it to a less experienced player to shoot it and they would continue to do this so that everyone on the team was involved. 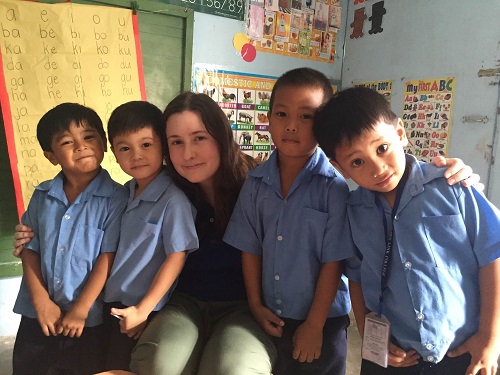 Lara with some preschool boys from the TOS Learning Centre, about ten minutes away from the GLC

The three weeks of my visit were a paradox, of slow and fast. Experiencing the way of life in this pocket of the world was a very enriching experience. Showering with a bucket and scoop was new for me.  My first tricycle ride was just as exciting as my tenth; I wish Auckland would adopt this mode of transport! Riding on a jeepney was also a unique experience. The traffic was something Auckland rush hour could never compete with. Jeepneys would violently cross five lanes in a matter of two seconds to toot their horns and see if we wanted to get on. A jeepney is very cramped inside. People even stand outside just hanging on. Passengers pass their fare forward till it reaches the driver. I believe the minimum fare was seven pesos which is about 20 cents. I tried a vast variety of new foods, never failing to have rice at least once a day. The fresh buko juice, or as we New Zealanders call it, coconut water, was amazing as were the other tropical fruits I tried. I even managed to squeeze in a few pizzas during my stay!

I went to the Theosophical Order of Service Learning Centre (TOSLC), which is a small pre-school around ten minutes away by tricycle from GLC. This comprises two classrooms of pre-schoolers. In comparison to GLC the resources were limited. The children there learn in a mixture of English and Tagalog for the first couple of months and are then switched completely to English. The college students at GLC who choose to pursue a degree in teaching, volunteer at TOSLC and help tutor the children. 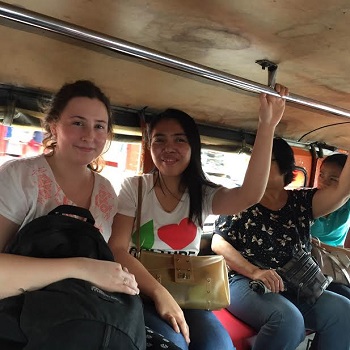 One day I went with two GLC students to feed a man in need. We walked for 15 minutes in the blazing heat until we reached a very small brick structure. Half of this housed a family, who had their own small store. On the other side of this was a hole in the wall, which led to a small pit. Inside this pit were a few belongings and some cardboard, which served as a bed. This pit was somebody’s home. It was a heartbreaking moment to see firsthand the conditions in which this man has to live. We then sat with him. The girls I was with asked him about his life using Tagalog and then translating for me. He had no family and could not walk. Students of GLC bring this man food everyday as a part of the feeding programme. It was wonderful learning of the ways in which Golden Link students help their community.

I was able to meet Diana Rose Orilla, the Geoffrey Hodson Memorial Scholar, during my time at GLC. At age 14 she is just finishing grade nine. I enjoyed the time I spent with her and was amazed at how perceptive she is for someone of her age. Having lunch with her and her friends was wonderful and reminded me of what I was like at their age, with talk about boy bands and their lives.

I would like to take time to mention all the amazing students and teachers of GLC who looked after me during my visit. A special mention to Teachers Mary Grace and Janice who were both lovely women who looked out for me.  To Bebie and Aime, two college students, I would like to thank you for being by my side my entire visit (I miss you two!). I would also like to thank all the college students for all the laughs, the singing and chats over the three weeks. You were all so kind. It was so wonderful spending time with you all and I appreciate your farewell; it was beautiful (and sad!). I will miss you all very much. 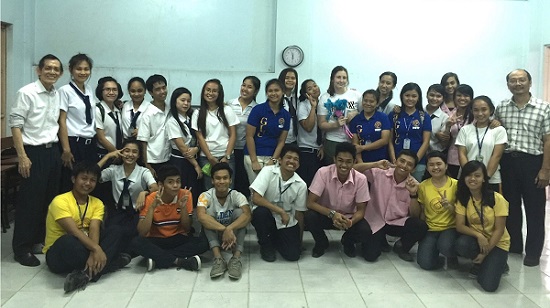 Lastly a huge thank you to the School Administrator Rekha Nahar and GLC President Vicente Hao Chin, Jr who have poured so much beautiful energy into GLC, and without whom my visit wouldn’t have been possible.

GLC seems to me to be a real embodiment of theosophical values. I would like to tell donors from TS and TOS groups around the world that their support of the school is well worth it! All the resources and donations given to GLC are greatly appreciated.

“I had a class this afternoon where Lara attended. After the class a group of students came to the classroom and started singing and dancing to say goodbye to Lara … The students highly appreciated her presence. It was lovely to have her.”

[Reprinted with permission from TheoSophia, June 2016. The magazine of the Theosophical Society in New Zealand]