Being present at the conference and mingling with others, quickly resulted in the dissolution of the ideas of separateness, or difference among Theosophists associated with a specific tradition. Mingling freely, it was refreshing to speak with souls of like mind, having similar Theosophical aims, intents, wishes, dreams, and expending very similar efforts in their work for Theosophy, in the world, as students at other lodges have. It was uplifting to find that Theosophical students were open, inviting, and easy to speak with regarding mundane as well as Theosophical topics.

The Adyar Estate itself, full of beauty, nature, and silence, was very conducive to a walking or sitting meditation, and inner search regarding the great truths of life, as well as our individual and united purposes as Theosophists to serve in the world.

In speaking with students from other TS lodges, it was a pleasure to hear of the work and study ongoing currently, and the different efforts being put forth, concerning the sharing of the principles of Theosophy worldwide.

It was also interesting to hear that some of the challenges experienced in the world of ULT, related to attendance at meetings, youth, and Theosophical effort, were similar to those encountered in the lodges of the TS and in other places. It seemed after all that there were more similarities than differences, when it came to heart and motive. As a result, the entire experience was and remains an uplifting and inspirational “samskara”, engraved in the sheath of my mind, awaiting its cyclic return.

Concerning the conference and presentations, it was a delight to hear other views and applications of Theosophical Principles In Action, and share in discussions regarding ideas expressed on the topics of Universal Responsibility and Compassion. Many of the ideas and references presented resonated with and were the echo of the wisdom of HPB and her teachers. It was indeed good to hear a similar message from so many different speakers, the heart of which is Theosophical teaching. These are truths that can stand the test of time, and should be applied in all cycles now and coming, to all problems, and efforts in the world leading towards global enlightenment, followed by wise action and service.

As a member of International Theosophy Conferences Inc., this conference, it's experience and sharing, only inspires me to believe more and more, that the vision of ITC as a platform for an Internationally Global Theosophical Community and communication, working together, regardless of Theosophical tradition, or independent individuality, is the right one, if its purposes and goals, are maintained and applied in there proper spirit and intent.

Lastly, but not least, I extend special thanks to Tim Boyd, Dr. Chittaranjan Satapathy, and all the others who extended their efforts to make this happen.

I will end, with a wish, one expressed by HPB in her 4th message, using the metaphor of the bundle of sticks, “Divided, they will inevitably be broken, one by one; United, there is no force on earth able to destroy our Brotherhood.   …   Be Theosophists, work for Theosophy! Theosophy first, and Theosophy Last …”.

May the coming years bring more Theosophical sharing and working together, amongst the traditions, for the sake of all souls worldwide, and the awakening of the Buddhi-Manas of the Globe. 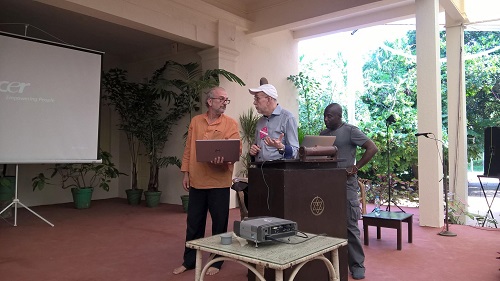 It was a great pleasure for me to accept the invitation kindly issued by the Theosophical Society, Adyar to deliver a presentation during the annual International Convention at the Adyar Headquarters. Many thanks to President Tim Boyd and Vice-President Chittaranjan Satapathy for breaking down the illusive barriers!

In itself this was an historical occasion. To my knowledge it had never happened before that a Theosophical leader from The Point Loma -Theosophical Society was invited to speak, together with a student associated with the United Loge of Theosophists, Gene Jennings. We may call this an important step forward in improving the bonds among Theosophical organizations.

For many years now we have been working hard for ITC, International Theosophical Conferences Inc, creating a meeting place, call it a platform, for Theosophists belonging to all organizations, recognizing our common basis: Theosophy as given out by H. P. Blavatsky and the Masters. An open meeting place to exchange ideas, to trust and respect each other and to learn from each other and, most importantly, to determine how we can make Theosophy a living power in the world. We have named this process “cross-pollination.” In Adyar I sensed the same open atmosphere. I was pleasantly surprised to meet up with so many TS-Adyar delegates and friends we had met before, during the various ITC Conferences. Obviously we also made new friends, whom we are certainly to meet again.

The journey to India, Chennai and Adyar was a great undertaking. India was a mind-changing experience. Friends on location helped us to find our way in Chennai and took us to Pondicherry and the world-famous temples of Mahabalipuram. Visiting the Adyar grounds was not such a new experience, because we had been in other TS-Adyar centers like Krotona, Naarden, Wheaton and Paris. The general atmosphere on these locations is similar, but obviously in Adyar it has a typical Indian touch. Being one of the founding places in Theosophical history makes Adyar very special. Just before the Conference, due to heavy rainfall, large parts of Chennai, and also the Adyar grounds were flooded. Members and workers however had done a great job. Everything was properly cleaned and prepared; there was nothing that affected the Conference.

The theme of the Conference, “Compassion and Universal Responsibility”, is a subject very close to my heart. In my presentation “Compassion: the sole reason for the existence of The Theosophical Society”, with the subtitle “How to support each other to become useful instruments in the hands of the Masters of Compassion”, I tried to express what moves and motivates our TS members to be a Theosophist, doing Theosophical work.

Listening to the presentations by speakers from all over the world, being a part of this event and talking to this international group of Theosophists was exiting. We heard the word “compassion” explained from many different angles, for instance in the lecture of Trân-Thi-Kim-Diêu, who gave an explanation with a Buddhist flavor, and in the lecture of Dr. Chittaranjan Satapathy, who gave an overview of the different views on compassion in all world religions.

The moments of mingling with Theosophist from all corners of the globe, in between the talks, during the breaks, was most inspiring and valuable. Speaking directly from Theosophist to Theosophist broke down all negative thought-elementals of the past. The atmosphere of mutual respect made these conversations enjoyable and constructive.

I extend hearty thanks to all those Theosophists who felt that changing old customs by inviting representatives from sister-organizations would be a good initiative, and who worked so hard to make this conference possible.

One of the highlights for my wife and I was as special visit to the Olcott School. A former head-mistress of this school for children from poor families showed us around there. Both Tim Boyd and Chittaranjan Satapathy made this visit possible for which we are grateful. It is wonderful to see how a group of idealists with hardly any funds at all, are managing to educate these children, so that they can reach a higher level.

Last but not least and reflecting on this event, a final thought comes to my mind:

I would like to emphasize that we need to be watchful not to concentrate too much on the struggle we undergo, maintaining our outer possessions. The big challenge for every Theosophical organization is also to go inwardly and to focus on making a strong and valid connection with the world today. It is crucial to move away from the old and relative safe ways to disseminate, or better said, to reintroduce Theosophy. Therefore Theosophists must engage with the world in a new and fresh manner. Well-versed, inspiring Theosophical lecturers with a deep knowledge of the teachings, by giving the example, should be able to convince people of Theosophical values by demonstrating how to live Theosophy and how to become Theosophy.