Adyar had a sizeable number of cattle, with the numbers increasing every year due to the presence of a few cows in the herd. Because of labour and financial constraints, a decision was taken by the TS management to send the herd to a well-run goshala, where they would receive good care and be able to spend the rest of their lives in comfort, in a peaceful environment. It was also decided to retain four bullocks for light garden work on the estate. 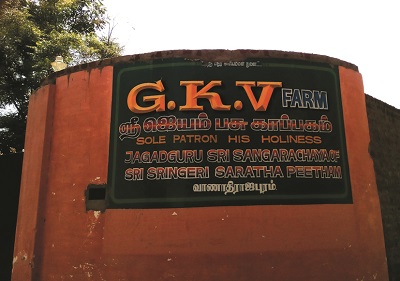 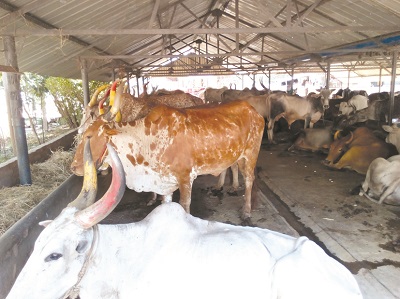 After a close scrutiny of a number of goshala-s in the state, Sri Jayam Govardhana Goshala at Mayiladuthurai, which is about 300 kms from Chennai city, was selected by Mr Anoop Jaiswal, Chairman of the TS Animal Welfare Committee, who was then the Director General of Police, on the basis of information obtained from his sources in the Police Department. The reports indicated that this Goshala was one of the best run in the state, known for the compassionate and excellent care given to the cattle housed there. Another advantage was the abundance of grazing area where the cattle could freely roam, before being taken into the shelter of the goshala in the evening.

It was decided that three lorries would be engaged to transport the seventeen cattle, and the convoy to be escorted by the Garden Superintendent, Mr Sanghram Suryavanshe, and four garden workers who would travel with the animals in the back of the lorries. Mr Sanghram narrates his experience thus: we began to feel anxious when a little drizzle turned into rain on the night of 2 July, 2015. For once, we did not want rain in Chennai. Maybe it was a blessing, as the night was going to be long . . . We had to shift the cattle (seventeen in all) to their new abode, a six-hour drive from Chennai.

The three trucks arrived at the Adyar estate shortly before midnight. The process of loading the cattle onto the lorries by using a makeshift ramp began. Naturally, they were full of anxiety and fear on looking at the huge lorries. They had led a peaceful and uneventful life till then and were justifiably suspicious about going up the ramp and onto the waiting vehicles. With much pushing and cajoling, they started climbing up one by one. In between, one or two stubbornly refused to oblige. A lot of the credit should go to the truck drivers, without whose help it would have been a very difficult job. One of the truck drivers injured his kneecap when he hit something which he could not see in the dark and started bleeding profusely. He had to be rushed to our resident doctor, Dr Inbaraj, who notwithstanding the lateness of the hour, willingly bandaged his bleeding knee. It was now 1.30 a.m. in the morning.

One bull calf refused to climb up and for more than an hour and a half everything possible was done to cajole him to enter the lorry. Meanwhile, another young cow changed her mind and jumped out of the lorry and ran into the bushes. It was then decided to leave the two animals behind and concentrate on getting the remaining ones loaded.

The job was finally completed, except for the cow and the stubborn little calf who wanted no truck (pun intended!) with the whole business. It was almost 5 a.m. and we had to start on our long journey before daybreak as the police do not allow heavy vehicles to ply on the city roads after 6 a.m. in order to ease traffic congestion. The cow and bull calf were left behind, to be picked up later.

The journey began in right earnest and the trucks moved slowly in a convoy, passing through small towns and hamlets on the way. Just when we were lulled into a (false) sense of security, a cow jumped out of the truck! The four Garden Department workers and the three truck drivers again swung into action and managed to catch the errant cow (who was mercifully unhurt) and put her back into the lorry. This time, the ramp was a heap of garbage outside a small town. For once, garbage heaps turned out to be useful!

A similar incident happened a few hours later when another cow jumped out. This time, thankfully, there was a load of soil over which the cow could easily climb to reach the truck. It must be mentioned here that the driver who had injured his right leg, was in a lot of pain, but stoically drove on. We stopped for a short tea break just as we were reaching our destination and one of the drivers got the happy news that he had just become a father! 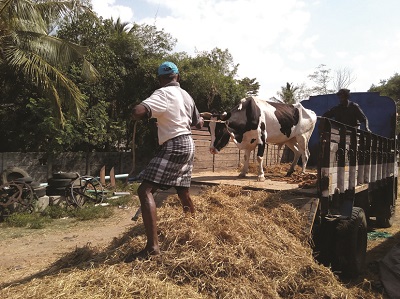 A reluctant bull being coaxed out the lorry

During the course of a conversation with the truck drivers, when asked how they were so adept in handling and loading cattle, they revealed that they had on many occasions taken elephants in their trucks and hence dealing with cattle was no big deal!

Finally at 3 p.m. we reached our destination — Sri Jayam Govardhana Goshala, in Mayiladuthurai — a place full of sun-dried hay, sweet water, and above all, an abundance of love, care and compassion. The cattle were unloaded so expertly that within an hour, all were on the ground and were led to a huge water trough mixed with a lot of herbs and nutrients, to help de-stress them after the long and arduous journey. The cattle began to slake their thirst and soon thereafter started feasting on the huge bales of hay that were kept everywhere for them. 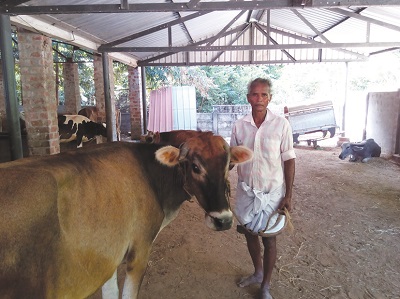 Chinniah, the garden worker with a TS cow at the Goshala

After a very late lunch at 5 p.m. the party returned home tired but triumphant and happy at having successfully achieved their goal.

The remaining cow and bull-calf were picked up by the Goshala in their Mini Van two days later and reached their abode safe and sound.

(reprinted from the Adyar Newsletter, August 2015)